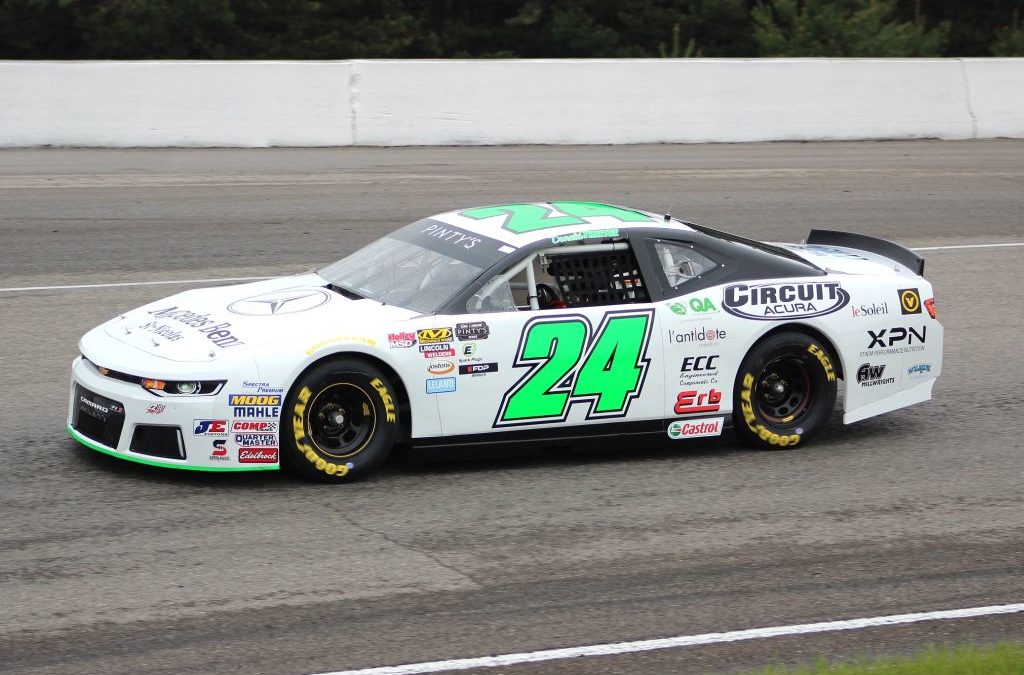 Alex Tagliani driver of the #18 EpiPen/Rona/St.Huberts Chevrolet Camaro XL1 has something to prove this weekend.  With little more than three laps remaining in the Victoria Day weekend event here in May, Tagliani had a sizeable lead on the field when a part failure ended his day. This track has not been kind to Tagliani as in eight NASCAR Pintys Series starts here he has two top five finishes and one pole.  He looks to change all that this weekend.

“I cannot wait to get there as doing both races, the Silverado 250 in a Chevrolet truck and the Total Quartz 200 in the Chevrolet Camaro ZL1,” said Tagliani.  “Both races on the weekend makes it busy but it is a track I love and have been so close to winning on. If you ask Tyler Case my crew chief, he will say that track owes us four of them. I will be happy with one and preferably this one. Our team is doing good but not the result we wanted at Riverside last weekend. However, when you are unhappy with a top five it shows that we are running up front and running for a championship. I think we are very focused as a team and will keep our head down for the last four and hopefully we can get that win under our belt here and continue our quest for the championship.”

Marc-Antoine Camirand driver of the #22 GM Paille Chevrolet Camaro ZL1 is coming off his worst finish of the season, a 13th place at Riverside Speedway after leading almost 50 laps. Prior to this event he had not finished outside of the top six all season. Camirand has seven previous starts on the famous road course with two top five finishes, one of them coming in May this year where he finished 2nd.  Camirand is looking to get his first win of the 2018 season and hopes it could come here this Sunday.

“After our tough weekend at Riverside last weekend, the GM Paille/22 Racing Chevrolet Camaro is ready to get back to CTMP where we had a strong 2nd place finish earlier this year at the opening race of the season,” said Camirand. “We need a top finish in order to get back in the championship points battle.”

Donald Theetge pilot of the #24 Mercedes-Benz St Nicolas/Circuit Acura Chevrolet Camaro is hoping to improve on his13th place finish at the season opener here in May. This was his first start at Canadian Tire Motorsport Park in the NASCAR Pinty’s Series, so he hopes that the experience gained will help him finish higher in the order this weekend.

“We need to improve on our finish here in May,” said Theetge.  “If we want to get closer in the points battle we will need to have our best road course finish this weekend.”

The NASCAR Pinty’s Series is competing in conjunction with the NASCAR Camping World Truck Series and it should be an action-packed weekend. For more information on schedule and tickets please visit canadiantiremotorsportpark.com