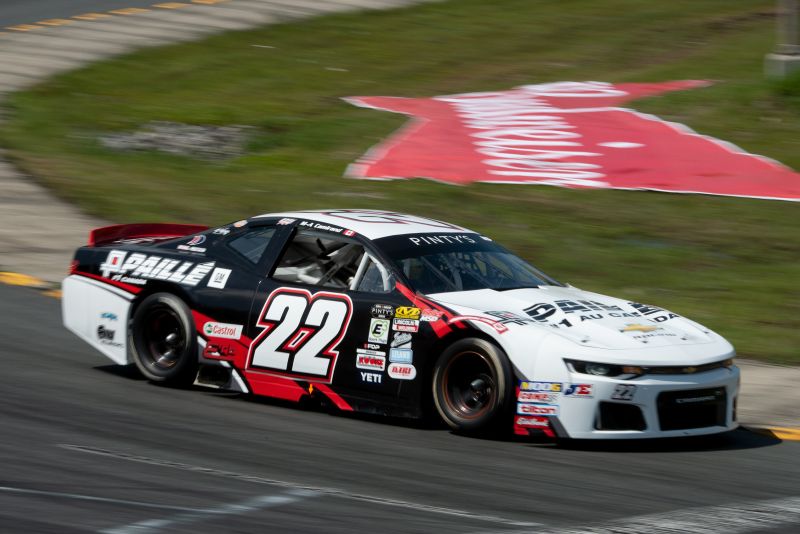 Camirand was confident to achieve a great result, for his first race this season in Quebec. After posting the 9th quickest time in a rain-delayed practice session, he came back strong for qualifying, starting the 300-lap race outside the second row, in fourth place.

When the green flag dropped, Camirand had a good start and managed to stay in the top-10. “I was racing on the inside groove, but my opponents in front of me were on the outside. I was faster than them, but I didn’t have space to exit turns fast enough to pass them. I believe that my GM Paillé n°22 Chevrolet Camaro was good to achieve a top-5,” stated Camirand.

Unfortunately, after the mid-race mandatory pit stop, a sway-bar bracket broke when Camirand came back on the high-banked oval. “When I came over the bank to go back on track, I heard a loud noise. After a few laps, I realized that something was wrong. My car became barely impossible to handle. I came back to the pits to change my tires, but we only found the real problem –the sway bar– after the race. I went back on track, but I was just trying to survive for the rest of the race,” told the driver of the GM Paillé n°22 Chevrolet Camaro.

Marc-Antoine Camirand finally scored an 11th-place finish in a race shortened to 286 laps due to rain. “We haven’t been lucky for the first races this season, and we’ll have to pull out good results in the next races if we want to come back stronger in the championship. We still can achieve it, but I’m looking forward to the next races, and I hope to leave bad luck behind me,” he concluded.

Marc-Antoine Camirand and the GM Paillé n°22 Chevrolet Camaro will be back on track on July 13th for the Pinty’s Grand Prix of Toronto, held during the Honda Indy weekend.