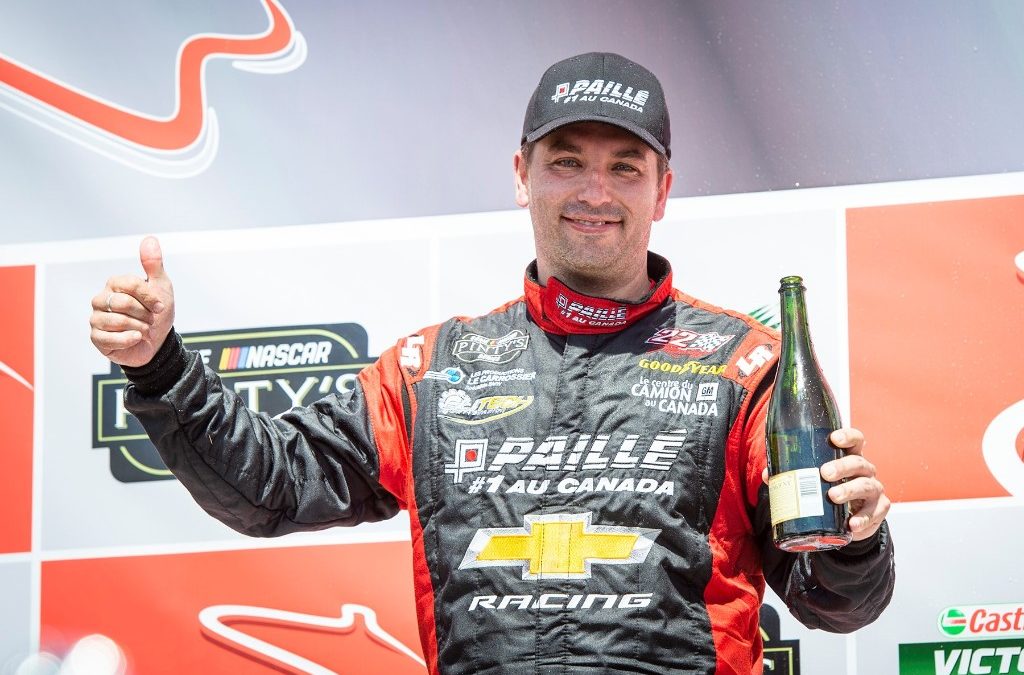 Bowmanville, ON, May 20, 2018 – Marc-Antoine Camirand scored a runner-up finish, on Sunday, for the season opener of the NASCAR Pinty’s Series at the Canadian Tire Motorsports Park. Camirand and the GM Paillé no22 Chevrolet Camaro ZL1 entered the final lap in 4th place but made the most of an action-packed last lap to secure a podium finish.

After qualifying was rained out, Camirand started 6th on the starting grid—determined by NASCAR rule book—and managed to gain a few spots during the 51-lap race. “We had very little time to practice with the new Camaro. We had a one-day testing session earlier this month, and we could only run a few laps yesterday because of fog and rain,” told Camirand.

“We managed our race to be in great position at the end. We did our first pit stop on green, and then I came in for new tires during the first of two full-course yellows. 22 Racing team pulled out a great strategy, and I was able to make the most of the incident at the end of the race,” added the driver from St-Léonard-d’Aston, Qc.

Fourth with a lap to go, he took advantage of an opportunity when the leader, Kevin Lacroix, and Andrew Ranger, had a contact. Lacroix lost a few spots during the incident, and Ranger was given a penalty after the race. Camirand and the GM Paillé no22 Chevrolet Camaro scored a 2nd place finish, behind Louis-Philippe Dumoulin.

“I don’t think I had the fastest car on the track, as it was a little bit oversteering. Despite that, I was in great position at the end of the race, and it paid off. This podium finish is a great surprise,
and I am happy to have a strong start early in the season, especially here, where many people from GM Paillé were there to cheer me on. I am confident for the rest of the season as we are heading for the ovals,” Camirand concluded.

Marc-Antoine Camirand and the GM Paillé no22 Chevrolet Camaro ZL1 will be back in action on June 16, as the NASCAR Pinty’s Series resumes at Jukasa Motor Speedway in Hagersville, ON, for the first oval race of the season.