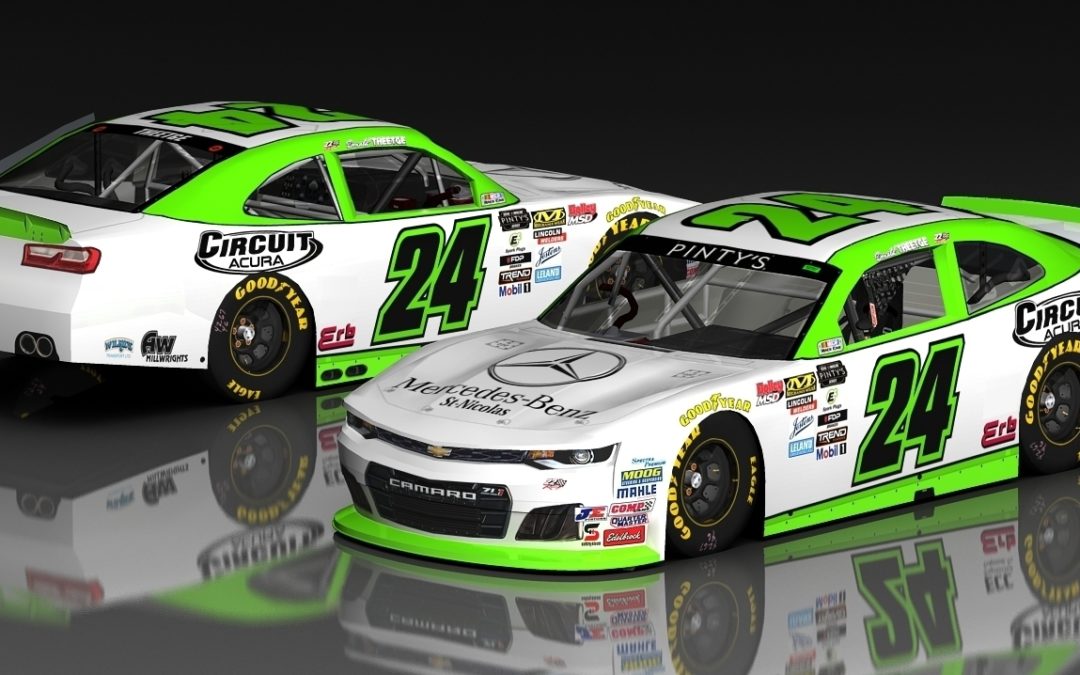 Wednesday March 27, 2019, Milverton, ON:  We are pleased to announce today that Donald Theetge will pilot the #24 Mercedes Benz St. Nicolas/Circuit Acura Chevrolet Camaro out of the 22 Racing shop again in 2019. Theetge for the second year will compete in all thirteen NASCAR Pinty’s Series events.

Donald Theetge and 22 Racing first partnered in 2016 and for two years he participated in selected events posting two poles and six top five finishes.  In 2018 Theetge joined the series full time and went on to win his first NASCAR race which came at Wyant Group Raceway in Saskatoon. He finished the season with six top five finishes and was 7th in the National Championship standings.

“We are very happy to have Donald back in the #24 Mercedes Benz St. Nicolas/Circuit Acura car again this year,” said team owner Scott Steckly.  “Donald is a student of racing and is competitive every week. While he won his first NASCAR race last year, he has been very close to adding to that total on several occasions over the past three years.  We except to see him running up front all season long again in 2019.”

“I’m excited to be doing the series for a second year in a row with Scott and his team,” said Theetge. “We really do a great team and we have a lot of fun. I’m more familiar with the tracks now and I see myself on podiums again this year.”

The NASCAR Pinty’s Series is made up of 13 events from Alberta to Nova Scotia and one event outside of Canada at New Hampshire Motor Speedway. They are held on ovals, road courses and street courses.  For more schedule information please visit www.22racing.ca/schedule/

The first event of 2019 will be held at Canadian Tire Motorsport Park on Victoria Day weekend on Sunday May 19th.  For more event information on tickets and camping please visit canadiantiremotorsportpark.com

Donald Theetge is a 52-years-old automotive industry passionate, he owns 3 dealerships with his brother in Quebec City.  He has been a stock car driver for more than 30 years, from Boischatel Quebec, he has four championship wins in LMS series career. He has raced in Canada and the United States winning more than twenty ACT and Castrol series races, setting him apart from his opponents. He won his first NASCAR race at Wyant Group Raceway in Saskatoon.