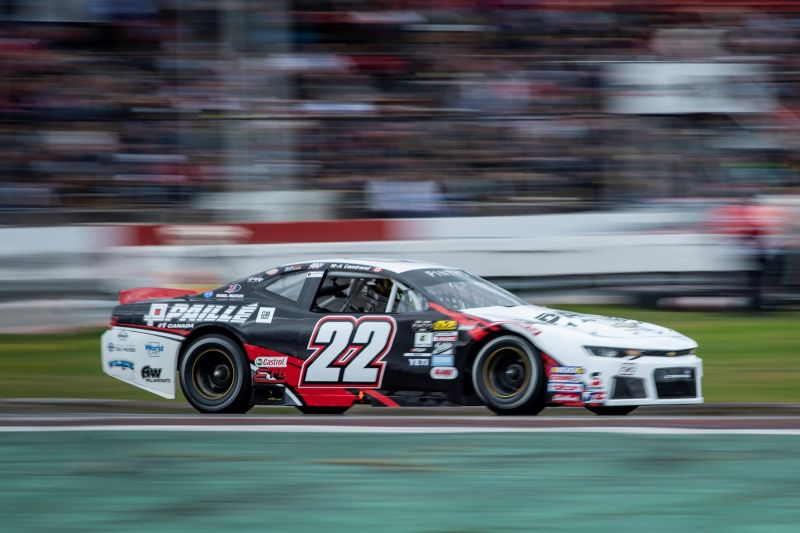 Saint-Eustache, QC, September 9, 2019 — Marc-Antoine Camirand finished 9th, on Sunday, as the NASCAR Pinty’s series was at Autodrome St-Eustache for the Lucas Oil 250. While this result is not what he was hoping for, the driver of the GM Paillé n°22 Chevrolet Camaro is confident that his team is going in the right way.

After a strong outing at Canadian Tire Motorsport Park, Camirand wanted another good race, for the last NASCAR Pinty’s event to be held at Autodrome St-Eustache.

During practice on Saturday, he has been able to score the 7th quickest time at the wheel of his GM Paillé n°22 Chevrolet Camaro. Qualifying was rained out, and the race was postponed to Sunday.

Starting sixth, Camirand was still confident to improve his position in the field. At the beginning of the race, he has been able to climb to the fourth spot and to fight among the leaders.

“At the mid-race break, we tried some new adjustments to improve the handling of the car. Unfortunately, it didn’t work the way we wanted. We came back to pits to try again some things,” he explained.

Camirand could be disappointed with his final result, but he is happy with the way he and his team fought during the race. “We were not afraid to make drastic changes. We tried something. This time it didn’t work the way we were hoping for, but at least we tried! We have been struggling with oval tracks since the beginning of the year, and we learned a lot during this race,” stated Camirand, who was also happy to see his last year’s crew chief, Randy Steckly, with the team for this event.

“I was happy to work again with Randy. Also, Scott (Steckly, 22 Racing team owner) had to replace Tagliani and was back on track. He realized that we still have work to do to improve the handling of our cars on ovals, but I believe that all that will have a positive effect on the long-term,” he concluded.

In these circumstances, Marc-Antoine Camirand is looking forward to the next NASCAR Pinty’s race, held on the New Hampshire Motor Speedway mile in Loudon, NH, on September 21st, for the Visit New Hampshire 100.