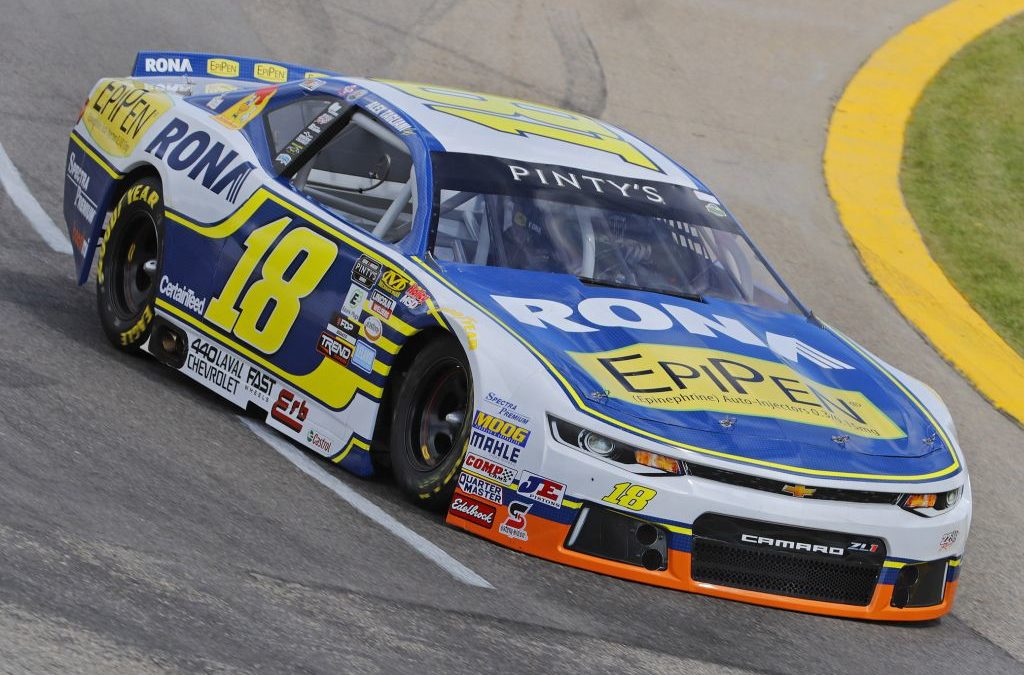 Montréal, August 19, 2018 – Alex Tagliani finished fifth on Sunday in Round 9 of 13 of the 2018 NASCAR Pinty’s Series held at Riverside International Speedway in Antigonish, Nova Scotia. Starting third on the grid, Tagliani drove his number 18 EpiPen/RONA/St Hubert Chevrolet Camaro to second place early in the race, but slid down to fifth after a while and battled for that position all race long.

On lap 233 of 300 of the Bumper to Bumper 300, the 22 Racing Team driver was down in eighth place but fought his way back to fifth place with 10 laps to go. The race around the challenging half kilometre speedway (third-mile) was scheduled to run on Saturday night under the lights, but a steady rain all day long forced the organizer to postpone the event until Sunday afternoon.

“At the start of the race, I was following the rhythm,” said Alex Tagliani after the race. “For the first of the two scheduled race breaks on lap 75, the team opted to stay on the track with our old tires when most of our opponents decided to change to new ones. As we all had only one set of new tires for the whole race, our strategy was to have new tires in the last stint. We were in third place at the restart.

“In the second part of the race up to lap 175 when the second break was scheduled, our tires had done nearly 225 laps, which made the car quite unstable in the turns. We lost a few positions during that stint. When we finally shod our car with new tires, I was in the wrong lane, the slow lane when the green flag was waved. I slid a couple of positions down to eighth place. Eventually, I moved up to fifth, which is not a bad finish. However, LP Dumoulin’s victory today extended his lead in first place to 20 points over me in the championship race, which is not good for me. We will have to work harder in the final four races in order to reduce the gap and take over the lead.”

Points leader Louis-Philippe Dumoulin scored his third win of the season ahead of Cole Powell and DJ Kennington. Andrew Ranger finished fourth ahead of Tagliani. For TAG, this was his sixth top 5 of the season in nine starts. Eighteen drivers started the race with 12 crossing the finish line. Six cars finished on the lead lap. The race was under full course caution four times for a total of 22 laps.

In the driver’s championship race, Tagliani is still third with 356 points, 20 points behind leader L.P. Dumoulin and one behind second place Cole Powell.

Up next – Big Weekend for Tagliani at CTMP

A big weekend awaits Alex Tagliani at Canadian Tire Motorsport Park road course in Ontario next Saturday and Sunday with a heavy schedule of competition. Tag is entered in two NASCAR Series races: On Sunday, August 26 at 11:05 a.m., he will drive his Chevrolet Camaro EpiPen/RONA/St Hubert in the Total Energy 200, round 10 of the NASCAR Pinty’s Series. After a very short lunch break and we hope a second victory celebration this year, Tagliani will enter his Young’s Motorsport RONA Contractors sponsored Chevrolet Silverado in round 17 of the NASCAR Camping World Truck Series scheduled to start at 2:30 p.m.