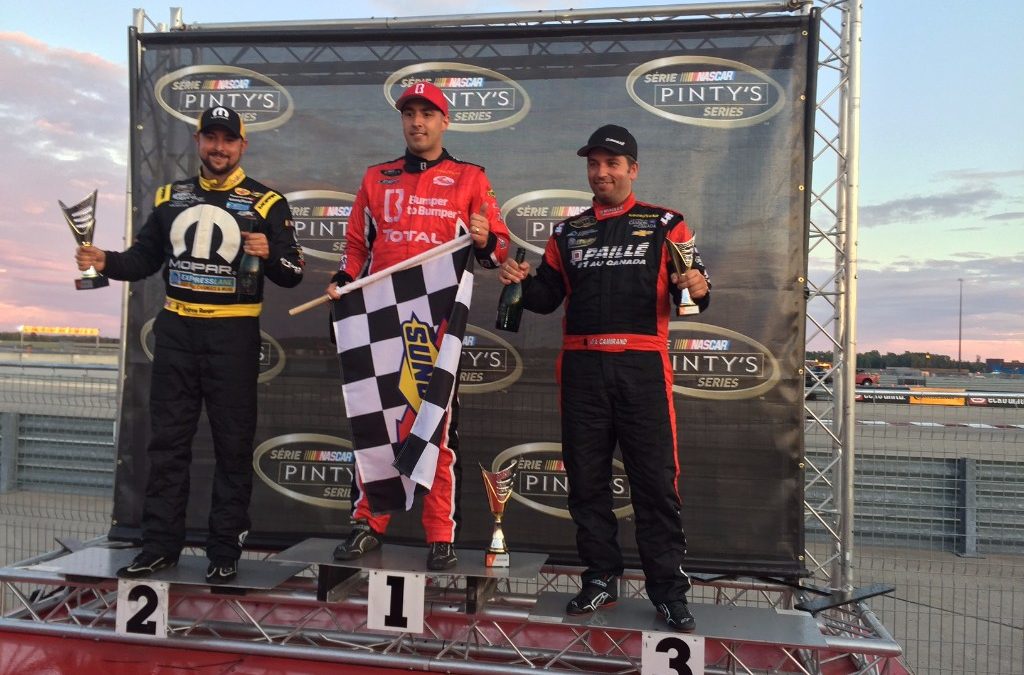 Milverton, ON – July 10, 2017 –  Alex Tagliani was excited to return to Circuit ICAR where he has enjoyed success in the past in his #18 EpiPen/Lowes Canada/St-Huberts Dodge and Marc-Antoine Camirand was looking forward to his debut in the #22 GM Paille Chevrolet on Saturday night. This was event #4 in the 13 race 2017 NASCAR Pinty’s Series season.

During the practice session Camirand found himself getting used to the new car and new team while posting times near the top of the field. After making changes to both of their cars Tagliani & Camirand posted identical practice times of 49.332 on the 1.1 km track tying them for 3rd quickest.

Next up would be qualifying which was taking place after several rain showers had passed over the track.  Tagliani chose to cruise around for a couple of laps before laying down his pole winning time of 49.304 seconds.  Camirand would post the 6th quickest time of 49.681 and would start the Ecko Unlimited 75 from the outside of row 3.

Tagliani set a strong pace for the first 61 laps of the 75-lap event extending his lead to over 3 seconds before the first caution came out.  Meanwhile Camirand was fighting for position and had moved up to 4th place when the caution flag waved.  On a wild restart, Tagliani got moved high into turn one and when the dust settled he was back in 4th and Camirand was in 2nd.  Using his smooth driving style Camirand would move around the #74 of Lacroix to take the lead on lap 65.  On lap 73 with two cars running out of fuel on the track, the caution flag again came out and with Tagliani having moved up into second the teammates would be restarting side by side looking for a 1-2 finish. Camirand drifted a little high in the hairpin at turn one and he and Tagliani would slide up allowing Lacroix to again move to the lead.  With only 2 laps remaining they would eventually settle for a 3rd for Camirand and a 5th for Tagliani.

“The car was perfect,” said a smiling Camirand after the race. “I think the first part of the race I just tried to save my tires and brakes.  About half way through the race it felt like my car was going quicker and I was able to pass Labbe, Lapcevich & Dumoulin under braking.  And then I got the lead after the restart and the car was great and I just continued to try and hit my marks.  That last restart with two to go I got a little bit high – I’m not sure why and lost two spots. Really disappointed about that for the team.  But first race and only just met my crew chief Randy Steckly this morning and we just clicked.  These guys gave me a fantastic car and I am very proud to represent GM Paille.  I can’t wait for Toronto next weekend.”

“The positive that as a group we have never been really fast around this place but the team brought a really quick car and so I was very happy and content,” said Tagliani.  “We were definitely the car to beat during the race and we had a great run but unfortunately we got pushed on the restart and we fought our way back to 2nd but another restart and we were pushed high again.  Taking the good out of this race we were very quick and as a team we did everything we could to bring a fast car and show pace so very proud of everyone for what we accomplished.  Very excited to go to Toronto and hopefully have a good run there again.”

The Ecko Unlimited 75 will be broadcast on TSN on Saturday July 15 at noon and on RDS on Sunday July 23 at 2 p.m.

The Toronto Honda Indy takes place this Friday and Saturday July 14/15 with practice and qualifying on FREE Friday and the Pinty’s Grand Prix of Toronto 35 lap main event on Saturday at 3:45 p.m.  Tagliani goes into this event as the previous race winner.