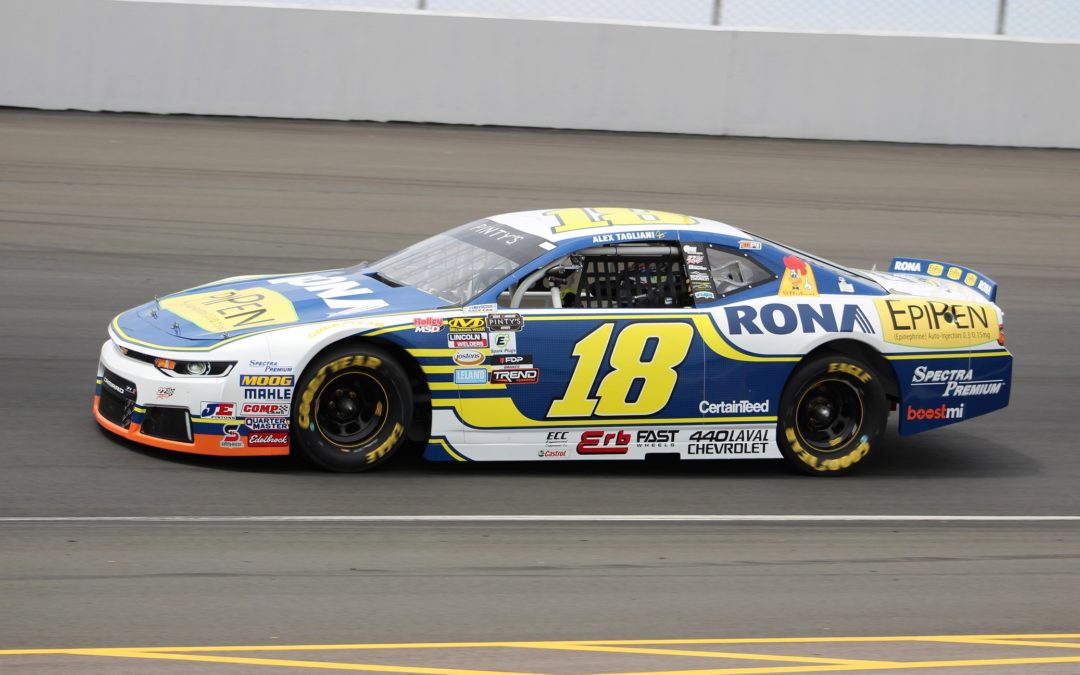 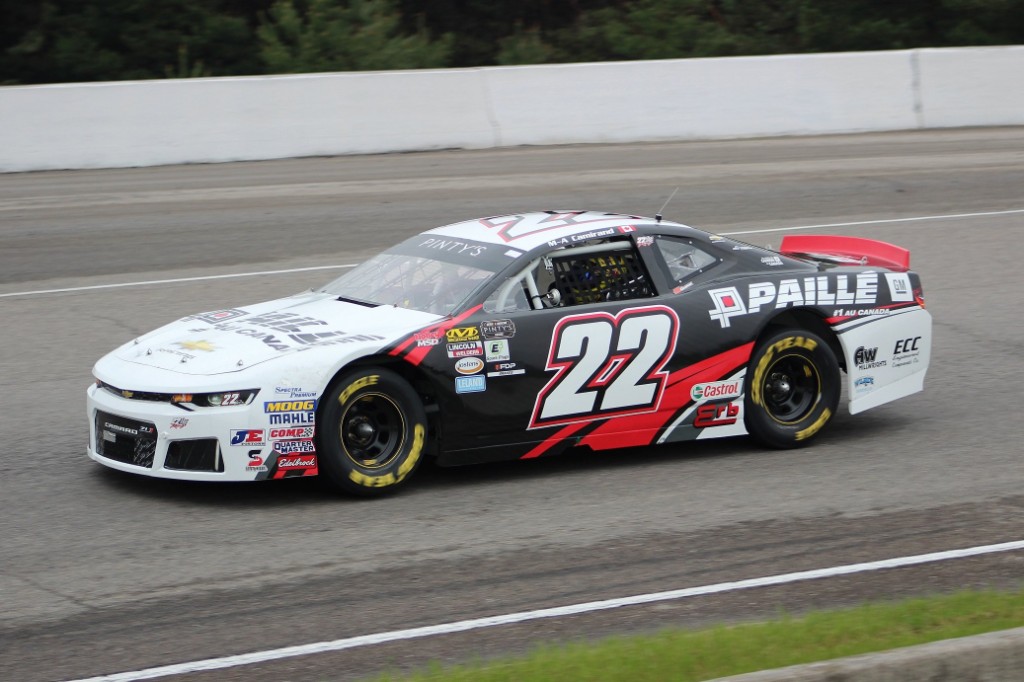 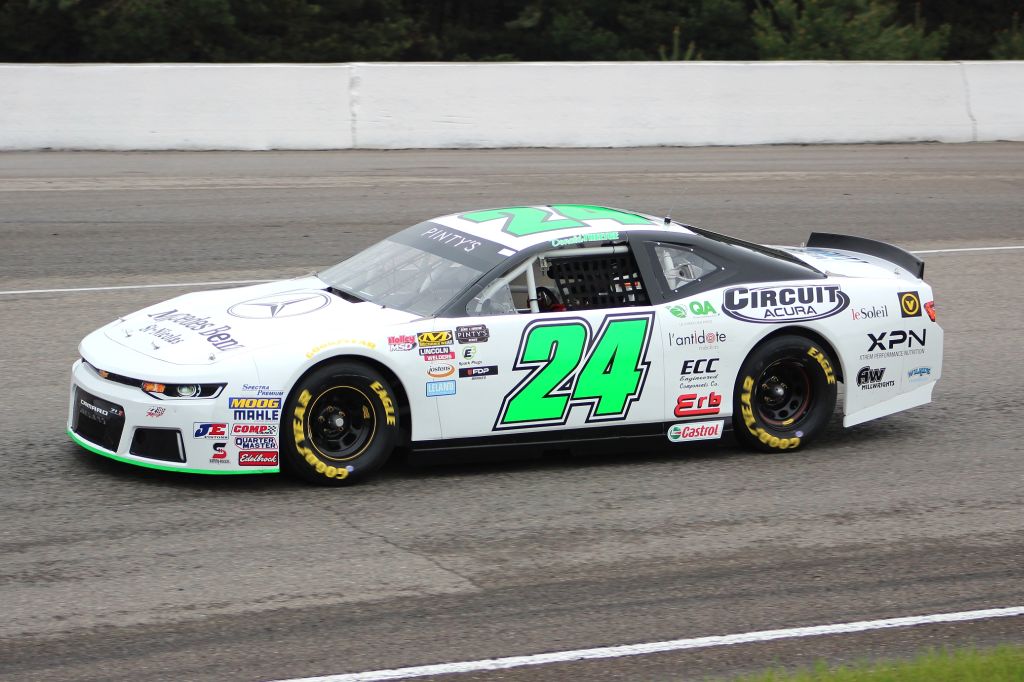 Milverton, ON, Wednesday Sept. 19, 2018:   The NASCAR Pinty’s Series is about to make their way out of Canada to compete for the first time in the 12-year history of the series with a visit to New Hampshire Motor Speedway in Loudon this weekend for the Visit New Hampshire 100.  This will be race 12 of 13 in the series schedule as the teams take part in the tracks Full Throttle race weekend with the NASCAR Whelan Modifieds and the NASCAR K &N series.

Alex Tagliani driver of the #18 EpiPen/Rona/St Huberts Chevrolet Camaro is in the thick of the championship hunt sitting only five points behind leader L.P. Dumoulin with two races remaining. He has posted five top fives in the last five races with two wins, so he hopes to keep that momentum going.

“I would be lying if I didn’t say I was a little nervous for the race this weekend but still very exciting,” said Tagliani. “It is the point in the championship – the final straightaway and I can’t be prouder of the team and what they have accomplished so far this year. I think the reason I am nervous is there would be nothing that would make me happier than to bring them a championship. A couple of weeks ago I saw the emotion when we won at CTMP after that track has bitten us so many times. I among other would like to see the championship back in the hands of 22 Racing and we would love to put Chevrolet on top as well. The partners who have been with us – EpiPen have been excited and behind us all the way.  My passion for renovation brought us Rona as a sponsor and they have been amazing, Chevrolet 440 Laval for all their support as we drive around the country, Spectra Premium amazing radiators and they keep our engines cool. Certain Teed, thank you & Fast Wheels have been a long-time partner so I say thanks for all their products for contests & giveaways. MPI steering wheels, Jerry Hall design for the great look of our cars and ECC Engineering. Erb Transport who have been partner with the team for a long time. Those beautiful International trucks pulling our trailers across the country get a lot of attention.  Boomers Custom Airbrushing who provided us with the amazing Humboldt Broncos helmet. St Hubert have been a tremendous sponsor and LPB who make the Tag on the Go cookies that are so popular and don’t last long at the track as everyone loves them, they are peanut free to support my severe food allergy. Food Allergy Canada, we have been supporting them through my foundation for a few years now and.  Driven and Linda Jones, she is there for us and makes us look good. She is always cheering us on and behind us for PR and helps with the success the team has had.  It is the time of the year to think of everyone who supports us and the big organization we have and say thank you. I have been to NHMS before but in Indy Car and NASCAR will be a different animal all together. It is a race that could play a big part in our championship battle and that is also why I am a little nervous.”

Marc-Antoine Camirand driver of the GM Paille Chevrolet Camaro is coming off his first NASCAR Pinty’s Series win two weeks ago at Autodrome St. Eustache where he and his teammates ran up front all night long just missing out on a 1-2-3 finish.  Camirand known for his road course racing skills put on a clinic on how to win on a tough short track, leading the most laps and holding off charges from teammate Tagliani and others.

“After a strong result with my first victory at St. Eustache, all of my 22 Racing crew are very pumped up to race at New Hampshire Motor Speedway.  It is a new track for a lot of us and will be a challenge for me and the team but I’m very positive to do well there. Everyone knows now that we can win on oval tracks too and we look forward to racing for another win.”

Donald Theetge pilot of the #24 Mercedes-Benz St Nicolas/Circuit Acura Camaro has some experience at New Hampshire Motor Speedway in other racing series.  Coming off a top 5 finish at Autodrome St Eustache, Theetge is looking for that second win of the season that has just been outside his grasp a few times this year.

“I’m sure we are going to have a good weekend at Loudon.  I do know the track from past races in ACT and the NASCAR Xfinity Series and I know 22 Racing will give me another good car like always, so we hope to be challenging for the win in the 100-lap race.

New Hampshire Motor Speedway is a 1.058 flat oval track with 1 degree of banking on the straightaways and 2/7 degrees of banking in the corners.  It also has on site a 1.26-mile, 12 turn road course and a 0.25-mile Mini Oval.