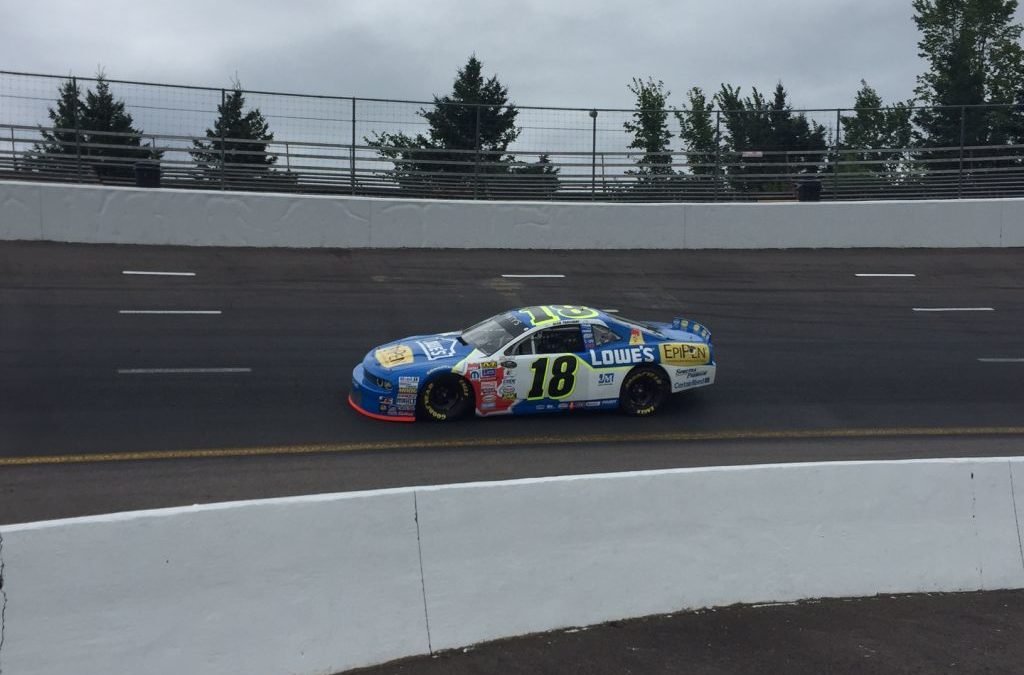 Wednesday August 15, 2018, Milverton, ON:  It’s race number nine on the thirteen race NASCAR Pinty’s Series 2018 schedule and it will take place this Saturday at Riverside International Speedway just outside of Antigonish Nova Scotia.

Alex Tagliani driver of the #18 EpiPen/Rona/St-Hubert Chevrolet Camaro ZL1, fresh off his win at the Grand Prix de Trois Rivieres last Sunday hopes to keep the momentum going and to continue to add to his podium finishes.  In the first eight events of 2018, Tagliani has posted five podium finishes but at Riverside this weekend he will have his work cut out for him as he has only recorded two top tens in his two visits to this track.

“Looking forward to Riverside as it is a fantastic track to race on”, said Tagliani.  “The Chisholm family has done a great job with the track and facility and are very passionate about what they do there.  Over the years they have contributed to the IWK hospital in Halifax where I have done a visit before.  It is important to us as a series in Canada to go there and support this family and facility. As a team, a back to back race where the team is coming off winning the pole and the race it is always good to get right back on the track.  Then another race the week following where I feel that the track owes us one so a very busy three weeks.  The new Camaro ZL1 has been in the winner’s circle and collected a lot of podiums as well and we look forward to continuing that for the remainder of the season starting with this weekend at Riverside.

Marc-Antoine Camirand driver of the #22 GM Paille Chevrolet Camaro ZL1, will return to a track he really likes this weekend at Riverside.  In 2015 when he last competed full time in the NASCR Pinty’s series he finished second to his now team owner Scott Steckly and they were the only two drivers on the lead lap when the checkered flag waved at lap 300.  Coming off his pole win and fifth place finish at the Grand Prix de Trois Rivieres and no finish this year outside of the top six he hopes to keep the momentum going.

“It is exciting to go back to Riverside as I am really looking forward to this race,” said Camirand.  “It is a really nice track and when I was last there in ’15 I finished a strong second place behind the #22 car of Scott’s.   I am hoping the 22 car will be back on top this weekend.”

Donald Theetge driver of the #24 Mercedes-Benz/Circuit Acura Chevrolet Camaro is looking to get back on the oval track this weekend where he is always a contender to win.  After a great showing at the Grand Prix de Trois Rivieres, finishing 7th he looks to come up with a strong showing here to get back in the championship points hunt.

“For us this weekend is going to be the most important race of the year,” said Theetge.  “If we want to get back in the point championship battle we will have to win and lead laps to make maximum points.  My team looks forward to the challenge.”

The Bumper to Bumper 300 takes place at Riverside International Speedway this Saturday August 18th, with gates opening at 12:30 p.m.  and the green flag at 8 p.m. Atlantic Time.  For more event information and tickets please visit www.riversidespeedway.ca

The NASCAR Pinty’s Series has held events at this .333 high banked oval since it’s inception in 2007. This will be the 12th straight year the teams have made the trip east.