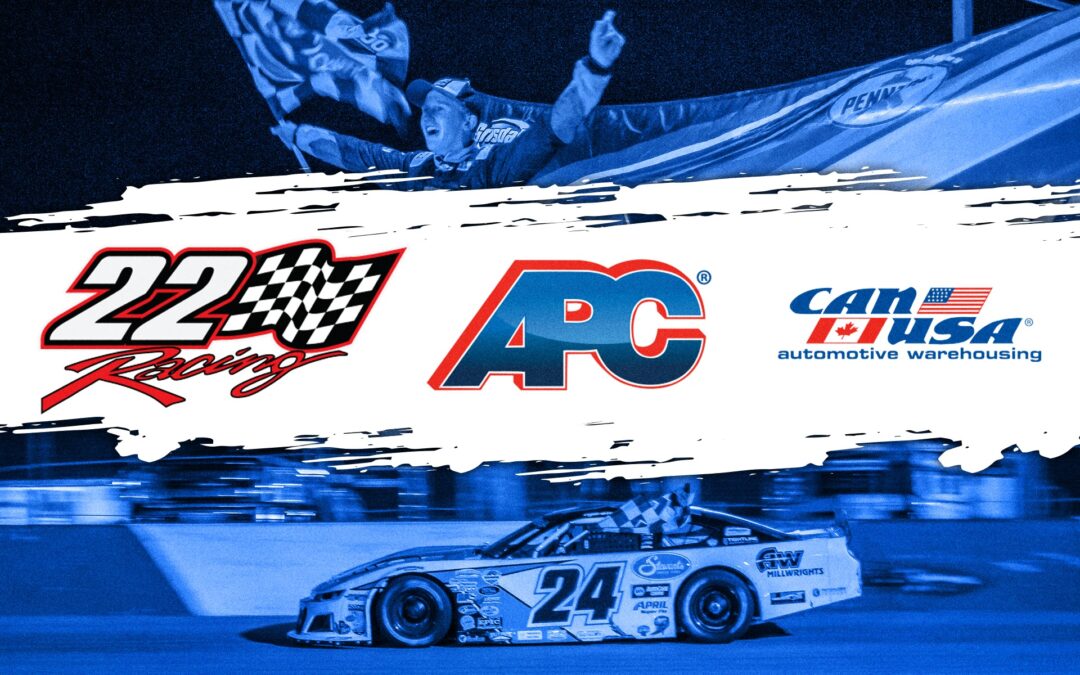 Milverton, ON, Friday January 21, 2022:   It is with great pleasure that 22 Racing announce today that a new partnership has been formed between 22 Racing, Kyle Steckly and APC Auto Parts/Canusa.

Steckly will participate in all nine race events in the 2022 APC Pro Late Model Series while contending for the Rookie of the Year honours.  In 2021, he entered two APC Series events, winning one and finishing seventh in the other.   In addition, he will compete in the Friday night Pro Late Model Series at Delaware Speedway, all while flying APC Auto Parts Centres/Canusa colours.

In additional news, Steckly will run the iconic #22, which has been used by a number of highly talented previous APC Auto Parts drivers including Jamie Ramsay, Jamie Cox and Pete Shepherd III.  It is also the same number his father Scott, Canadian Motorsport Hall of Fame inductee and owner of 22 Racing, won four NASCAR Pinty’s Series Championships running.

“I’m really excited to partner with APC Auto Parts Centres/Canusa for 2022 and beyond,” said Kyle Steckly.  “I am grateful for the opportunity to represent APC and to have this great company supporting me in my rookie year in the highly competitive series.  Sporting the #22 is also an honor as a lot of great drivers have raced this number both for APC and at 22 Racing.  I know I have big shoes to fill but I look forward to the challenge.  It should be an exciting year of racing while representing  APC.”

“APC Auto Parts Centres/Canusa is excited to be partnering with 22 Racing and owner Scott Steckly in sponsoring Kyle Steckly,” said Corinne Mallough, Marketing Manager Casusa/APC.  “We are looking forward to this new relationship with 22 Racing and the Steckly family.”

Additional partners for Kyle’s #22 entry, including his supporters from previous seasons and new ones will be announced in the coming weeks.  As well photos of the new design for the #22 APC Auto Parts Centres/Canusa Chevrolet will be released as soon as they are available.

About Kyle Steckly
Kyle is a grade 11 student at Stratford District High School.  In his spare time in the off-season, he enjoys travelling around southwestern Ontario playing hockey.
At the age of 16 in 2021, Kyle entered 12 events with his #24 Pro Late Model. He not only won Rookie of the Year in his first year in the Pro Late Model division at Flamboro Speedway, but he won the overall Championship title. He also entered two APC travelling series invitational Pro Late Model events, surprising many of the other 30 competitors by winning one of them.  Overall, he had 6 Wins, 1 in Grisdale Triple Crown series, 1 APC Pro Invitational Series and 4 in Flamboro Speedway Regular Season races.  To stay up to date with Kyle, follow him on his Facebook Fan Page @KyleSteckly or on Instagram @kyle_steckly or on Twitter @KyleSteckly