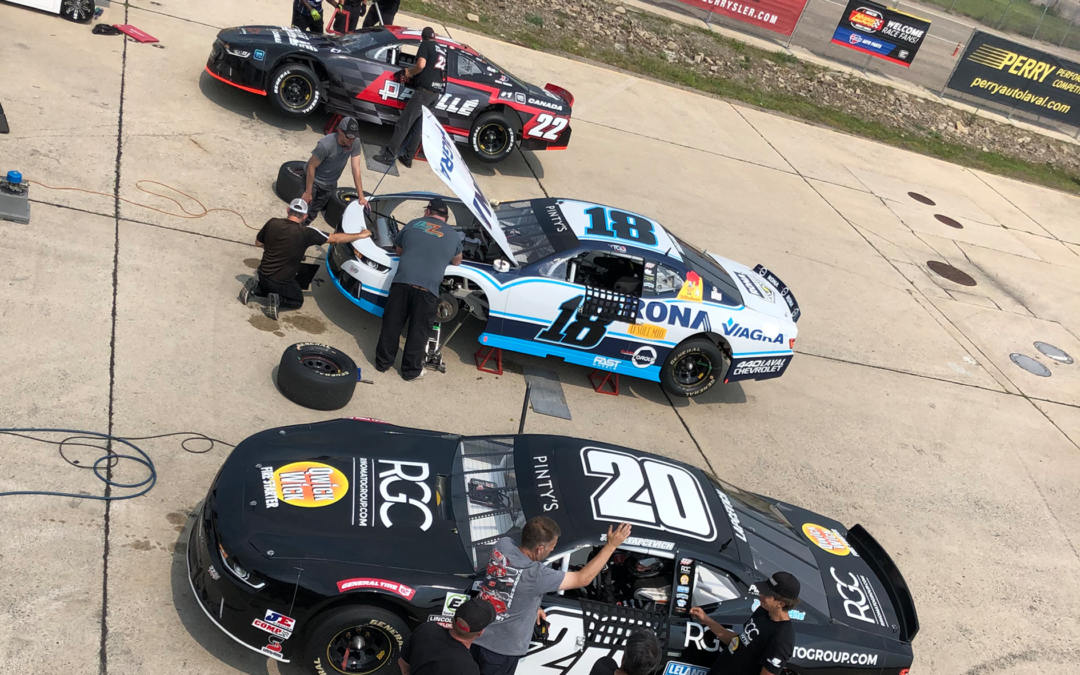 Milverton, ON, CANADA – Thursday July 29, 2021    –  The NASCAR Pinty’s Series takes to the track for the first event of 2021 this weekend at Sunset Speedway.  The highly anticipated season gets underway with twin 125’s; the Frontline Workers 125 & General Tire 125 which will run on Sunday, August 1, 2021 on the 1/3 mile paved oval located in Innisfil Ontario.

The pandemic-delayed start to the season has allowed for an initial return to a sense of normalcy as drivers and crews will finally be joined by fans in the stands at Sunset Speedway.

22 Racing is pleased to field three teams this season including Alex Tagliani who was the defending race winner at Sunset Speedway heading into 2020 but didn’t end up racing in last year’s doubleheader due to a prior commitment. In 2015 and 2016 Tagliani was the sole winner at Sunset taking both checkered flags. After a busy off-season preparing for the opening of the Tag E-Karting & Amusement center the veteran will be back behind the wheel of the No. 18 RONA / VIAGRA / St. Hubert Camaro to challenge for the win at Sunset.

After sitting out the pandemic-shorted 2020 season Marc-Antoine Camirand is excited for the new season to get underway at Sunset Speedway piloting the No. 22 GM Paillé Chevrolet Camaro. Camirand is best known as a highly skilled road course racer but has proven he is a threat to win at any track.  Camirand’s never-quit attitude resulted in 7th place in the final 2019 NASCAR Pinty’s Series drivers’ standings.
2021 will be his fourth full-time NASCAR Pinty’s season, a third with the support of GM Paillé, a testament to the NASCAR Pinty’s series, the sport and loyal race fans.

The newest member of the 22 Racing family, 17-year-old Treyten Lapcevich will start his rookie campaign at a track he has proven to excel at. After almost winning at Sunset last year in his series debut subbing for now teammate Alex Tagliani, fans can expect him to be in the hunt to claim a podium finish in this year’s season opener behind the wheel of his No. 20 RGC / Qwick Wick Chevrolet Camaro.

Races will also be streamed live on TrackPass on NBC Sports Gold for fans in the United States. Replays of full events will stream on TrackPass immediately after each race.