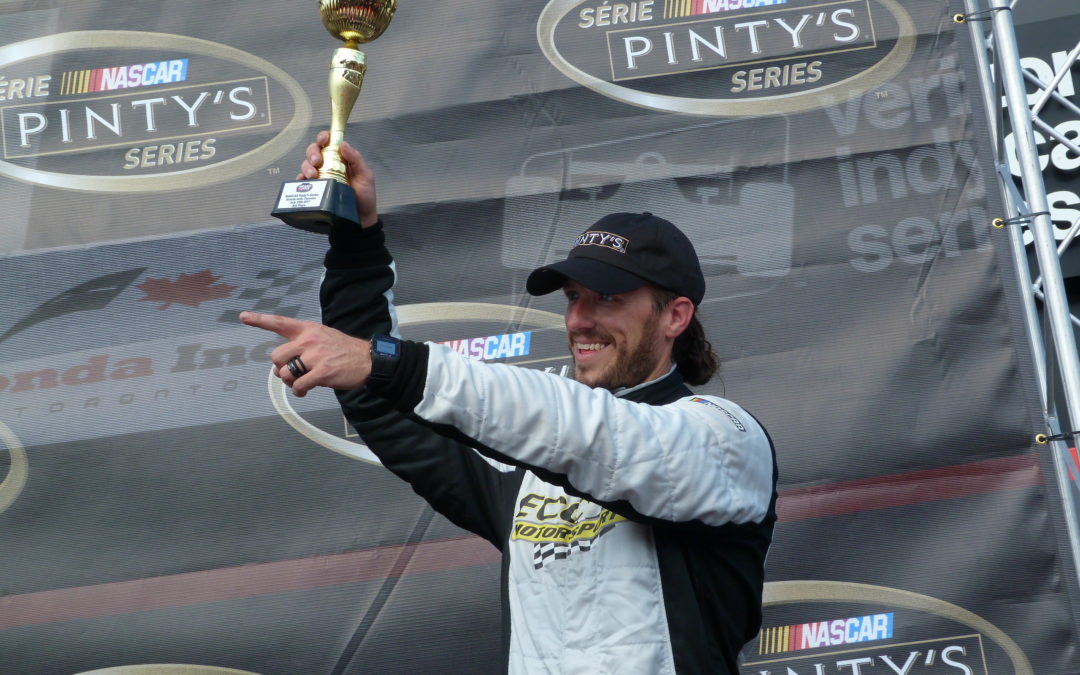 July 16, 2017:  The biggest event on the 2017 NASCAR Pinty’s Series schedule, the Pinty’s Grand Prix of Toronto is now in the books and it was a considered a successful one by 22 Racing.

Friday started out with qualifying and the 22 Racing teams didn’t disappoint.  Alex Tagliani in the #18 EpiPen/Lowes Canada/St-Huberts Dodge topped the charts with Marc Antoine Camirand in the #22 GM Paille Chevrolet following in 3rd and Adam Andretti in the #44 Engineering Components/Anchor Bolt & Screw Dodge posting the 4thquickest time.

The teams then went to work preparing all three cars for qualifying later in the afternoon.  NASCAR deemed there to be three qualifying groups and all three team cars were in the final and quickest group set by practice times earlier in the day.  When the dust settled the three teams were again all in the top 5 with Tagliani leading the way in 2nd, Andretti 4th and Camirand 5th.

After having contact with the wall in the final stages of qualifying, Andretti’s team and the rest of the 22 Racing crews went to work to fix the #44 entry.  It took all hands-on deck but they were able to make the necessary repairs for Saturdays Pinty’s Grand Prix.

Due to a late arrival for the drivers meeting Andretti was penalized and moved to the rear of the starting field for the 35-lap event but mot to be deterred Andretti took the challenge to heart.

At the drop of the green Tagliani was immediately on the bumper of Ranger and unfortunately early contact sent Tagliani to the pits for a drive through penalty for aggressive driving.  Not to be deterred he returned to the track in 5th position.  By lap seven Camirand had moved his #22 Chevy into second position and #44 Andretti was picking off competitors and moving up through the field. Shortly thereafter Andretti was forced to the pits with a flat tire under green flag conditions.  By the half way mark Camirand was still strongly in 2nd with a good lead over Tagliani in 3rd and Andretti had worked his way forward for the second time and was being scored in 8th.  With around 10 to go Tagliani slowed on the track and a track bar failure was determined to be the cause. He was able to stay on track and do slow laps but his hopes for a good finish were done.  Shortly thereafter Camirand while trying to find a way to get around Lacroix for the lead brushed the wall and then headed for the pits and his day was done.  In the meantime, Andretti was slowing picking off his competitors and when the green flag flew for the final restart he was in fourth.  Andretti made quick work of passing Labbe for 3rd but in his own words later he had used up the car pretty good coming from the back twice.  Final finishes #44 Andretti in third, #18 Tagliani in 14th and #22 Camirand in 16th.

“Wow” said Andretti after the race. “Unfortunately it was my mistake that put us to the tail and I really hate that for 22 Racing after they thrashed so hard to get the car perfect after our mishap in qualifying. We started at the back of the field and we had fought hard to get about half way through the pack and had a right rear tire go flat under green.  We caught a great break on getting a caution right away afterwards but firstly the pit stop was lightning fast – I wasn’t even ready to go.  I was fully expecting to go a lap down but we got back out and the caution flew soon after getting us caught up to the back of the field again. We just had to put our heads down and put all our back luck behind us and then the good luck started to come.  I can’t say enough about the NASCAR Pinty’s Series and the racing and its competitors and the 22 Racing team and all their supporters and sponsors that make it possible.  It was a very special day for Engineered Components who support me and Anchor Bolt & Screw and we are looking forward to doing some more of this NASCAR Pinty’s Series stuff and working with 22 Racing more in the future.  This was a great way to start our relationship.”

“As a team owner what more can you really ask for.” stated Scott Steckly after the race weekend.  “We had all three of them in the top five for practice and qualifying. We had three drivers and cars that were all capable of winning or being on the podium at least who all ran in the top three during the day.  I’m very pleased with our weekend and the potential for future wins and podiums for this great group of drivers and crew members.”

Next on the calendar for the 22 Racing Team will be the annual western swing with the kickoff event at Wyant Group Raceway in Saskatoon on Wednesday July 26th where the feature events will be two 100 lap races. Then on to Edmonton International Raceway on Saturday July 29th for the Luxxor 300.  Donald Theetge will be back behind the wheel of the #22 Dodge while Tagliani will look to get back in the win column this year as he defends his 2016 win here.