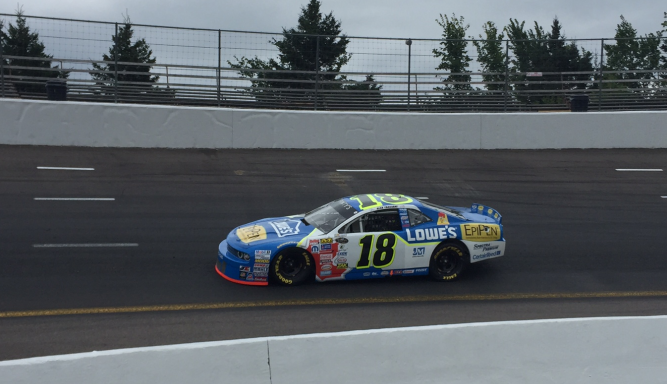 Antigonish, NS, August 20, 2017:   The 22 Racing Team were back on track this weekend at Riverside International Speedway for the Bumper to Bumper 300 and while the day wasn’t perfect both cars finished in the top ten. This was race number 10 in the thirteen race NASCAR Pinty’s Series.

Under cloudy skies the team took to the track for an hour and forty minute practice session.  When it was complete Donald Theetge in the #22 Circuit Acura/Le Soliet/L’Antidote Media Dodge was scored in 6thposition.  The #18 EpiPen/Lowes Canada/St-Huberts Dodge of Alex Tagliani was show tenth quickest.  Both teams went to work on the race cars making changes in hopes of making better qualifying runs.

It wasn’t long after practice that the anticipated rain showers started and it was determined that qualifying would be cancelled and the cars would start the Bumper to Bumper 300 based on their practice positions.  It was then a waiting game for the re-scheduled 7:30 p.m. start time but the rains continued to fall and the race was rescheduled until Sunday at 1 p.m.

During the first half of the event, the #22 of Theetge would run just outside of the top 5 and while running similar speeds to the leaders was not able to challenge. The #18 of Tagliani would find himself in the same situation while running just inside the top 10.  During the mid way point competition caution session both teams would make adjustments on their cars trying to make them better for their drivers. Over the next 150 laps Theetge would find himself involved in a minor on track incident and would end up down 2 laps to the leaders while Tagliani continued to work his way up to the top 5.  When the checkered flag waved the #18 EpiPen/Lowes Dodge was in sixth and while the #22 of Theetge was able to make back one of his laps he was still scored down one lap in 10th position.

The next race for 22 Racing will be the Total 200 from Canadian Tire Motorsport Park which will take place on Sept. 2nd & 3rd in conjunction with the NASCAR Camping World Truck Series. For more information on tickets and schedule please visit canadiantiremotorsportpark.com