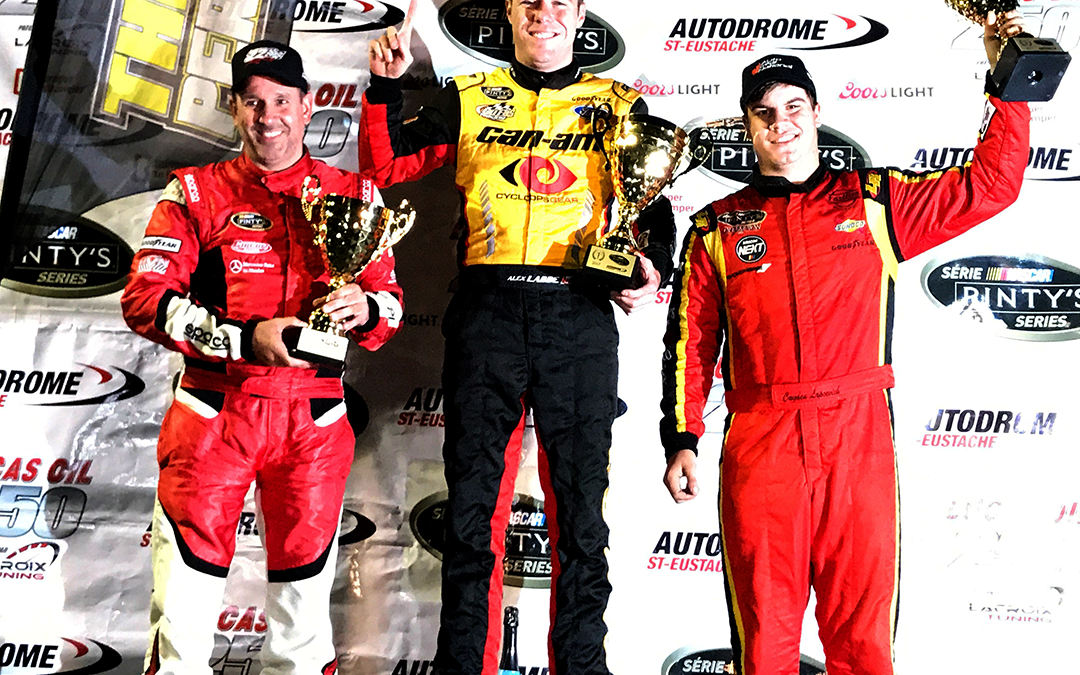 St-Eustache, QC, Sunday Sept. 10, 2017:   The twelfth round of the 2017 NASCAR Pinty’s Series took place last evening at Autodrome St. Eustache just outside of Montreal.  Donald Theetge brought the Circuit Acura/ Le Soliet/L’Antidote Dodge across the line in 2nd while Alex Tagliani in the #18 EpiPen/Lowes Dodge managed a tenth place finish.

During the practice session, early in the day the team found out Tagliani was suffering from a back problem. He managed to get in the car and while in considerable pain he was relatively happy with the set up of the car.  Theetge was able to find some speed in his #22 entry and was 3rd quickest.  They followed this up with qualifying later in the afternoon with Theetge 3rd and Tagliani 9th fastest.

At the drop of the green flag for the Lucas Oil 250 Theetge settled into the top three quickly while Tagliani continued to maintain a top ten position.  The first caution of the race took place at lap 49 and Crew Chief Tyler Case brought Tagliani to pit road for fuel.  Crew Chief Randy Steckly elected to leave his driver Theetge on the track a move that gave him the lead spot. There was another caution immediately following then the remaining 174 laps were run under green. The teams fully expected additional caution periods so they could bolt on some new tires for their drivers, but the race went the green for the remaining distance. When the checkered flag waved Alex Labbe had lapped the entire field except for second place finisher Donald Theetge who posted his 2nd podium finish of the year.  Tagliani struggled during the event and posted a 10th place finish.

“We had a good day today and we set up the car for the race knowing it would get colder and that paid off for us today,” said Theetge. “We changed a lot of things before the feature and that was good as well. I think we lost a lot of time behind the #74 but that was the plan, being patient and without caution I was afraid I would run out of gas. But Randy said to go ahead and try to pass Lacroix but then with 50 laps to go he asked me to save fuel.  The team did a great job and I am happy with second place.  I think we will have a shot at the win in two weeks at Jukasa.”