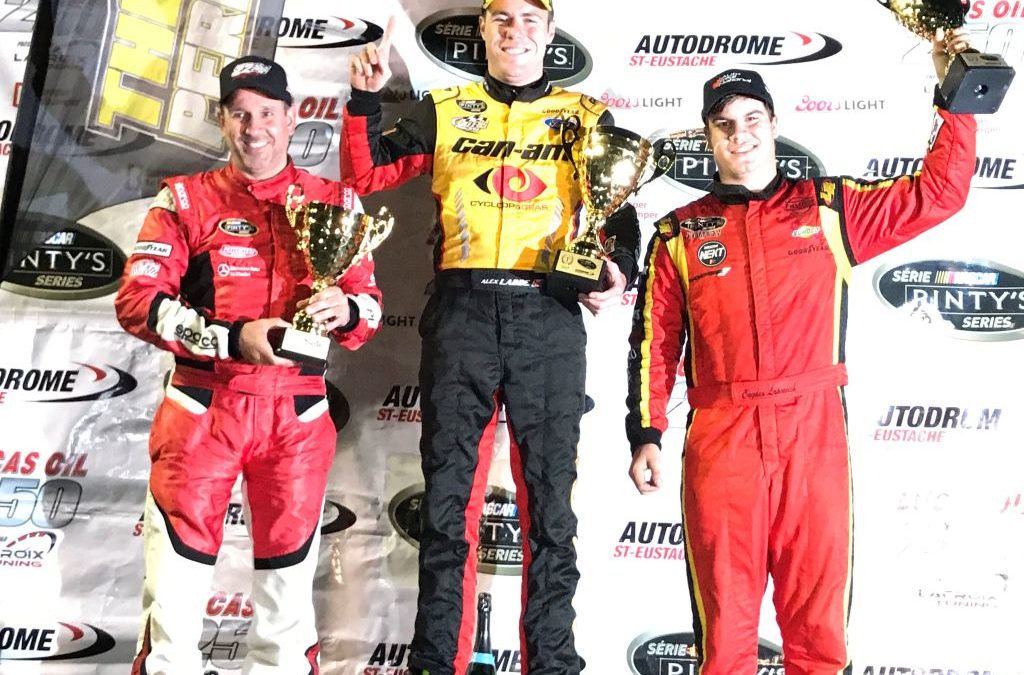 NASCAR Pinty’s Series heads to Autodrome St. Eustache for Round 11

Milverton, ON, Wednesday September 5, 2018:   The NASCAR Pinty’s Series will head to Quebec this weekend for event number eleven of the thirteen race schedule at Autodrome St. Eustache. This will be the final trip to Quebec this season as the last two events are in Loudon, New Hampshire and Caledonia, ON.

Alex Tagliani driver of the #18 EpiPen/Rona/St. Hubert Chevrolet Camaro ZL1 will make his sixth appearance at this .4-mile paved oval that has hosted seven previous NASCAR Pinty’s Series events.  In his five previous starts Tagliani has posted one top-five finish and currently sits 2nd in the championship points battle.  “The St. Eustache race for us is really important,” said Tagliani.  “We are in a fight for the championship and a few too many points behind for my liking with three to go but I still believe that it can be a really amazing fight.  I am very proud of what this team has accomplished and putting CTMP to bed after so many tries shows a lot of character in the team.  They were very focused and nervous because it has been our nemesis track and finally we were able to get the win. That race could be the turning point for us in our season and we feel we are going into the final three with momentum on our side.  This track has been very good for 22 Racing in the past and I think if we all put our efforts together we will get the best result.  We are not the first-place team right now but maybe as the 2nd place runner we can put pressure on the top spot. I know everyone on the #18 team and in the shop are working hard to get us to the championship.”

Marc-Antoine Camirand pilots the #22 GM Paille Chevrolet Camaro ZL1 and he will be making only his second start here in the series.  His first appearance was in 2015 he finished 3rd after starting back in 15th.  Camirand currently holds down 6th in the championship standings. “After a very tough finish at Canadian Tire Motorsport Park while we were running up front, we are really focused on having a good race at St. Eustache,” said Camirand.  “We are aiming to finish out the season really strong on the last three ovals and get the best finish in the points that we can.”

Donald Theetge is quite familiar with this flat, tight oval track as he has raced here in many different types of race cars over the years.  In one previous NASCAR Pinty’s Series start in his #24 Mercedes-Benz St Nicolas/Circuit Acura Chevrolet he finished an impressive 2nd in 2017, a feat he hopes to duplicate or better in 2018. Theetge is currently listed as 8th in the NASCAR standings but with three oval track races to finish up the season he hopes to move up a few positions.  “I will definitely be aiming for the win here on Saturday night,” said Theetge.  “I have won on this track many times, so my team and I will be ready and focused on a good finish again this year.”