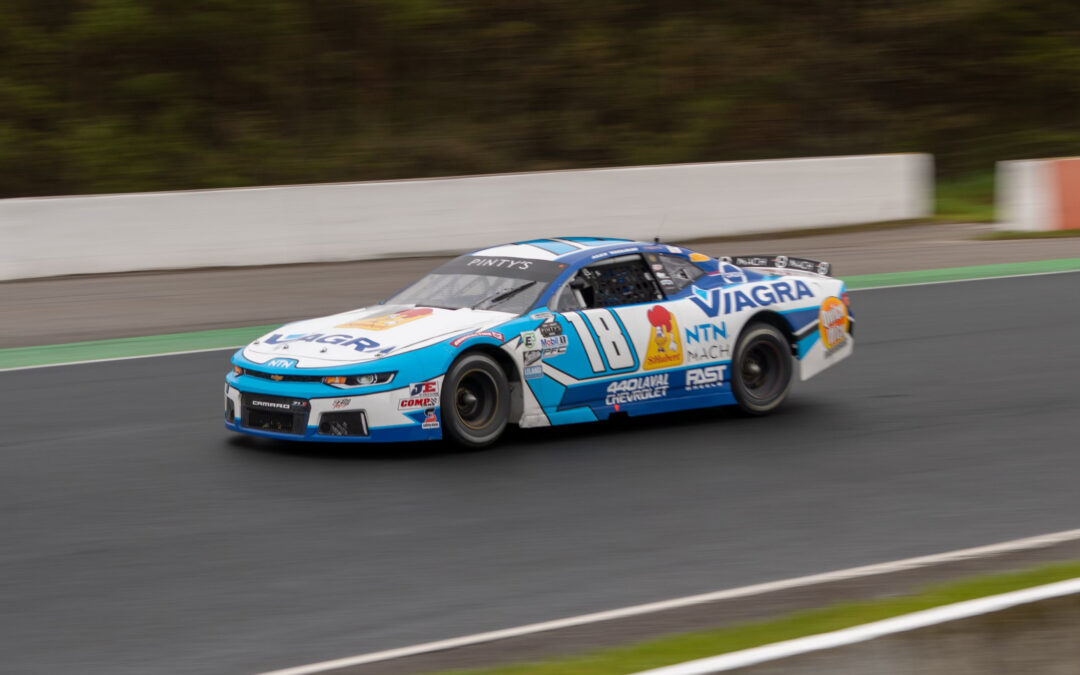 Bowmanville, ON – Tuesday, May 24, 2022 – In a rain-filled weekend the 22 Racing drivers continued to stack up their points at the first road course race of the season. The eBay Motors 200 at the infamous Canadian Tire Motorsport Park saw Alex Tagliani finish 2nd and Treyten Lapcevich finish 6th.

During practice on Saturday Tagliani established a good pace in his No. 18 Viagra / St Hubert Chevrolet Camaro with the 6th fastest time. It may have been only Lapcevich’s second time running at CTMP but he proved that he was a top contender by holding the fastest practice time until the very end when L.P. Dumoulin bumped him down to 2nd.

During practice Lapcevich tried a new strategy that sent him into the wall in turn 3. The 22 Racing team got to work quickly attempting to repair the No. 20 RGC / Qwick Wick / FBM Chevrolet Camaro.

Only an hour after practice some severe weather rolled into the area. It seemingly came out of nowhere, forcing everyone at the track to take cover. It only lasted a short amount of time but caused serious damage at the track: trees were ripped out of the ground, picnic tables were blown away, camp trailers were flipped over, and the power went out. Due to the weather and the time needed to repair the track, qualifying was cancelled. The drivers would be starting the race in order based on their practice times.

The 22 Racing team arrived back at the track early Sunday morning to continue making repairs to Lapcevich’s car. It began to rain again and the teams were forced to start the race under wet conditions with their rain tires on. At 1:30 the command to start the engines was given and the eBay Motors 200 was finally underway.

The race featured a long green flag run. Lapcevich tried to find his footing in his first race in the rain. Tagliani was working hard to get his car up to the front. Both Lapcevich and Tagliani came in for fuel and new tires under active pit stop conditions.

With two cautions and a brief red flag within the last 3 laps anything could happen. In the final lap Kevin Lacroix made a move on the 1st place driver Gary Klutt, this opened up the 2nd place spot for Alex Tagliani. Tagliani finished 2nd for the second year in a row at CTMP. Treyten Lapcevich finished 6th. This put Tagliani 3rd in the championship points standings and Lapcevich 2nd, only 2 points behind leader Kevin Lacroix.

Next The NASCAR Pinty’s Series and 22 Racing Team will be heading to Autodrome Chaudière on Saturday, June 11, 2022.