22 Racing Teams All Finish in Top Ten at CTMP 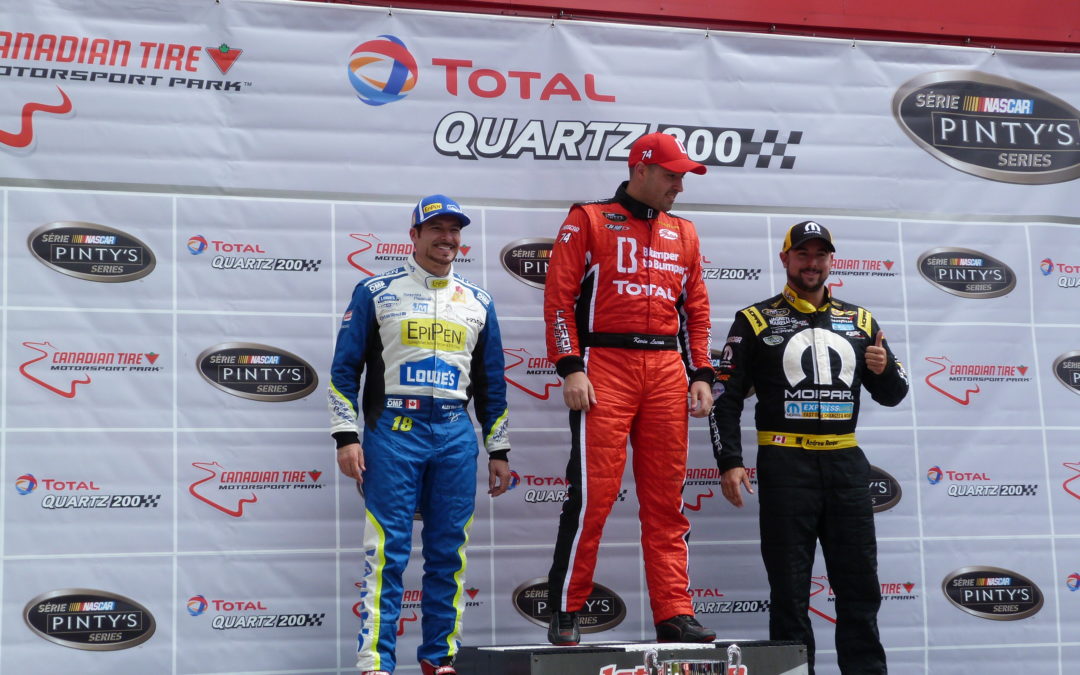 Monday Sept. 4, 2017:  Round 11 of the 2017 NASCAR Pinty’s Series took place on Sunday at Canadian Tire Motorsport Park (CTMP) with all three teams recording top ten finishes.  Tagliani in the #18 EpiPen/Lowes Dodge notched another podium with his 2ndplace finish, while Marc-Antoine Camirand in the #22 GM Paille Chevrolet was 7th and Adam Andretti in the #44 Engineered Components Co/Anchor Bolt & Screw Dodge was 10th.

Saturday’s practice session had Tagliani, who was doing double duty on the weekend with entries in both the Pinty’s series & the Camping World Truck series, in 2nd while Camirand was 8th and Andretti was 11th quickest.

The teams went to work to try and some adjustments to the cars for qualifying.  Camirand reported that his car was in his words twitchy and Andretti said he just wasn’t comfortable with the feel of the car yet.  Qualifying was done in three stages and when all complete Tagliani would be 3rd quickest behind Lacroix and Simone.  Camirand would be 8th and Andretti dropped back to 14th.

Sunday morning dawned with rain showers in the area. Clearing skies prevailed though prior to the start of the Total Quartz 200, but NASCAR deemed it a wet track and all the teams made way to their pit stalls to install grooved rain tires. The 51-lap event started with the teams making slow progress around the wet track. By lap thirteen the 22 Racing teams had all made it to pit road for fuel and were being scored as Tagliani in 2nd, Camirand in 5thand Andretti in 8th.  Soon after the drivers advised their crews the track was dry enough to go back to slicks and they all made their way to pit road for tires.  The Total Quartz 200 was the first race since ICAR in 2015 to go green the entire way with no caution periods.  When the checkered flag waved Tagliani was scored with another podium with his 2ndplace finish.  Camirand was scored the first car down one lap in 7th and Andretti also down one lap finished 10th.

After podium ceremonies Tagliani had to immediately report to the Truck series pit to get ready for the Silverado 250.

“Exciting race on the wet track, it was so slippery but I did pass a few guys,” said Camirand after the race.  “After it started to dry up a bit we went to the pits for race tires and I got caught speeding at the end of pit road and had to serve a penalty.  It is too bad as I think we had a car to finish in top 5 for sure maybe even a podium.  I was really happy with the GM Paille/22 Racing car and they did a great job in my last race for 2017 and I’m really looking forward to 2018.”

“It was a rough day you know, not the performance we were looking for,” commented Andretti.  “The conditions were tricky at the start with the wet track but I think that worked in our favour.  As the track dried out it was starting to work against us. The gremlins we had in the dry throughout the weekend came back and continued to get worse. That held us back a bit and it brought the competitors we were able to pass easily on the wet back by us again. We fought hard for a good 10th place finish and I want to thank 22 Racing for everything and Engineered Components and Anchor Bolt & Screw who make this happen.  Another great weekend in the Pinty’s series and another good time racing with the competitors in the series.”

The next event for 22 Racing will be at Autodrome St Eustache for the Lucas Oil 250 presented by Bumper to Bumper and Coors Light on Saturday Sept. 9th.  For more information visit their website at  autodrome.ca

Follow the 22 Racing Team on social media for behind the scenes updates on; Twitter@22RacingTeam & @ScottSteckly22, Facebook Fan Page 22racingteam and Instagram22racingteam