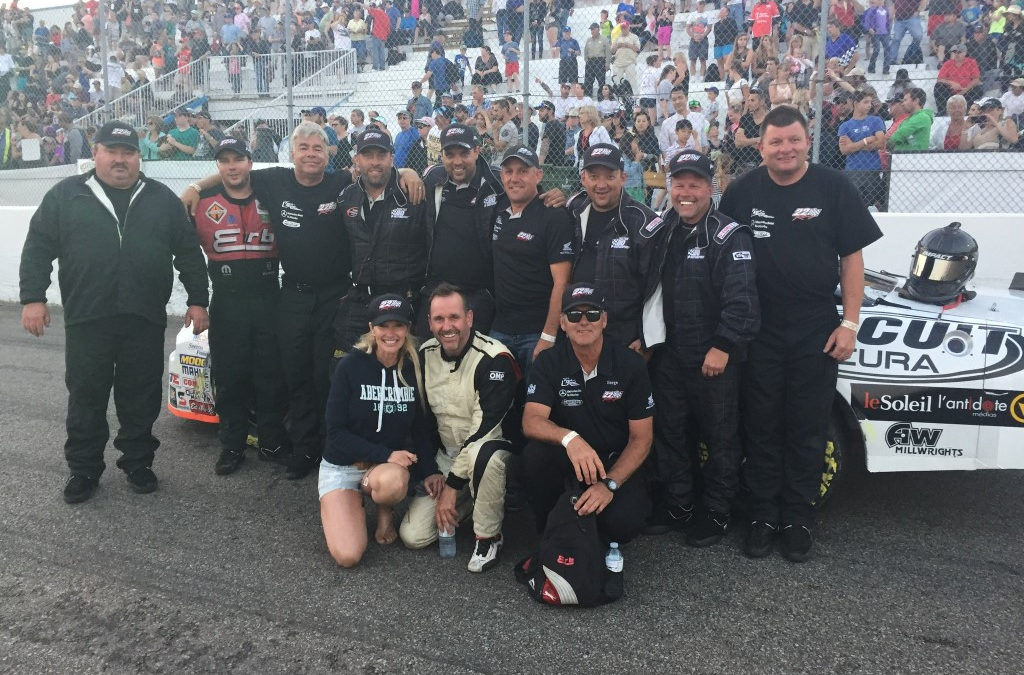 July 31. 2017:  The final leg of the three race Western Canada swing for the NASCAR Pinty’s Series teams took place on Saturday night at Edmonton International Raceway.  Alex Tagliani would enter the race as the defending race winner for the Luxxor 300 while Donald Theetge would make his inaugural start at this ¼ mile bullring.

After the hard crash at Saskatoon on Wednesday night, the #18 Tagliani EpiPen/Lowes Canada/St-Huberts crew worked furiously on the off days to get the car ready for the 300 lap event.  During practice, they had some minor issues that caused Tagliani to be slower than expected and the 15th quickest time was the best they could do.

Donald Theetge in the #22 Circuit Acura/Le Soliet/L’Antidote Media Dodge likes this type of track and he didn’t disappoint. After running the entire practice session in the top five he finished up the session in 2nd position.

After making the necessary changes to the #18 Tagliani machine he went out to qualify with the result being the 3rd quickest time.  Theetge in the #22 would follow that up with the 4th fastest result lining them up side by side in row two for the start of the 300 lap event.

Starting on the outside on this track is very challenging and you can find yourself shuffled to the rear of the field quite easily but Tagliani & Theetge both managed to get down to the bottom quickly.  They ran in the top six for most of the first 150 laps when NASCAR threw the mandatory caution for pit stops.  When they relined up on track for the final 145 laps, Theetge was scored in 3rd and Tagliani in 8th.  On the resulting restart, Tagliani was accessed a drive through penalty to which there has been no full explanation as to why but he was able to maintain the lead lap albeit at the tail end. He would then start his march back to the front pack. Theetge would continue battling with Labbe, Kennington and Lacroix eventually taking the lead on lap 193.  He  continued to share the lead with Labbe & Lacroix until the caution flew again on lap 278 when NASCAR deemed that Labbe was the leader, a ruling which the 22 team vehemently challenged but to no avail.  The final laps were very exciting for the fans as Theetge challenged for 1st and 2nd and Tagliani continued to pick off his competitors gradually moving up through the field.  The final scoring would give the #22 of Donald Theetge 2nd place and the #18 of Tagliani a 4th place result.

While a 2nd and 4th are great finishes, neither driver was happy with the NASCAR decisions that were made during the event.  However, they will both move on to their next events knowing that they have cars to run up front and challenge for the wins.  Tagliani will compete next at Grand Prix de Trois Rivieres in two weeks, while Theetge will be behind the wheel of the #22 next for Riverside Speedway in Antigonish, NS on Aug. 19th

The Luxxor 300 from Edmonton International Raceway will be televised on Sat. Aug. 12 at 1 p.m. ET.