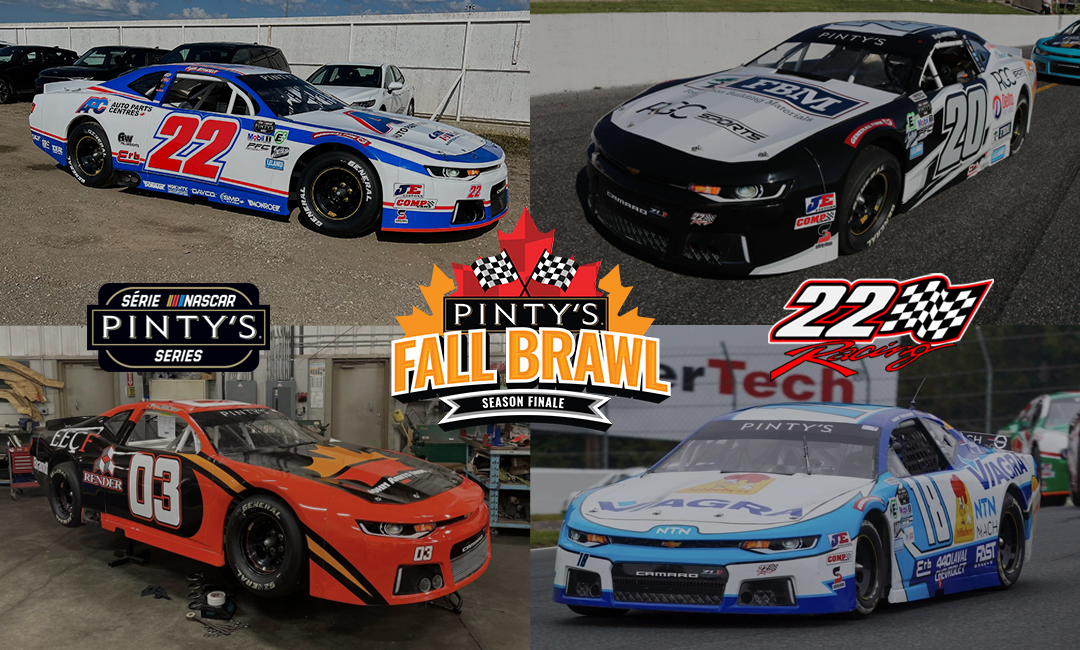 Milverton, ON – Friday, September 23, 2022 – The NASCAR Pinty’s Series 2022 season is coming to a close this Sunday, September 25th with the series making its final stop at Delaware Speedway. The Pinty’s Fall Brawl will take place in Delaware, Ontario, and with 27 cars on the entry list it’s sure to be filled with hard racing action for all 250 laps around the ½-mile oval. Treyten Lapcevich and Alex Tagliani will be joined by Kyle Steckly returning after making his debut in Saskatoon, and Ray Morneau making his NASCAR Pinty’s Series debut in his No. 03 John Aarts Group Chevrolet Camaro.

In 2021 the NASCAR Pinty’s Series visited Delaware Speedway at the end of the year for a triple-header which saw a series of unfortunate events for both Treyten Lapcevich and Alex Tagliani. Treyten Lapcevich secured the pole for all three races and although he seemingly won the first of the three races, a last lap bump-and-run forced him to finish 2nd. In the second race Lapcevich finished 5th and in the final race he was wrecked and finished in 15th. Being familiar with oval-track racing Lapcevich is ready to come back to Delaware this year with his No. 20 FBM / RGC Sports / Qwick Wick Chevrolet Camaro and take home the win he was robbed of last year.

Alex Tagliani also ran into some bad luck at Delaware in 2021, a wreck created many mechanical issues for the team forcing them to finish no better than 14th in all three races. Despite last year’s struggles, Tagliani and his No. 18 Viagra / St Hubert Chevrolet Camaro are coming to Delaware on a mission, hunting for another win to go with his victory from earlier in the year at Edmonton International Raceway.

Kyle Steckly will be returning to the NASCAR Pinty’s Series after making his debut in the series in Saskatoon. Kyle has been very busy finishing 2nd in the Delaware Weekly Series and going into the APC United Late Model Series season finale the Saturday evening prior to Sunday’s race, 2nd in points. Steckly’s amount of experience and expertise running at Delaware Speedway is sure to come into play with his No. 22 APC Auto Parts Centres Chevrolet Camaro during The Pinty’s Fall Brawl.

Ray Morneau will be making his NASCAR Pinty’s Series debut in his No. 03 John Aarts Group Chevrolet Camaro out of 22 Racing. His name may be new to the NASCAR Pinty’s Series but it is certainly no stranger to Delaware Speedway: just last week Ray won the championship in the weekly Delaware Pro Late Model Series. With 4 wins and 10 top-fives at Delaware Speedway in 2022 alone he clearly is well-versed at this track and this is sure to contribute to some strong results for Morneau in his Pinty’s Series debut.

“I’m really excited to make my debut this Sunday in our John Aarts Group, Render Construction, East Elgin Concrete Forming, GFL Chevrolet Camaro with 22 Racing. I can’t wait to see the challenges that come with racing a Pinty’s car and with a new field of drivers,” Ray said.

Tune in to TSN.ca or the TSN app to watch The Pinty’s Fall Brawl streamed LIVE. The race will also be broadcasted on TSN on Sunday, October 2nd at 12:00 p.m. and RDS2 in Quebec on Saturday, October 8th at 1:30 p.m..

This season the NASCAR Pinty’s Series raced on oval tracks and road courses in Ontario, Quebec, Newfoundland, Alberta, and Saskatchewan. For more information and updates, please visit www.22racing.ca and NASCAR.ca.