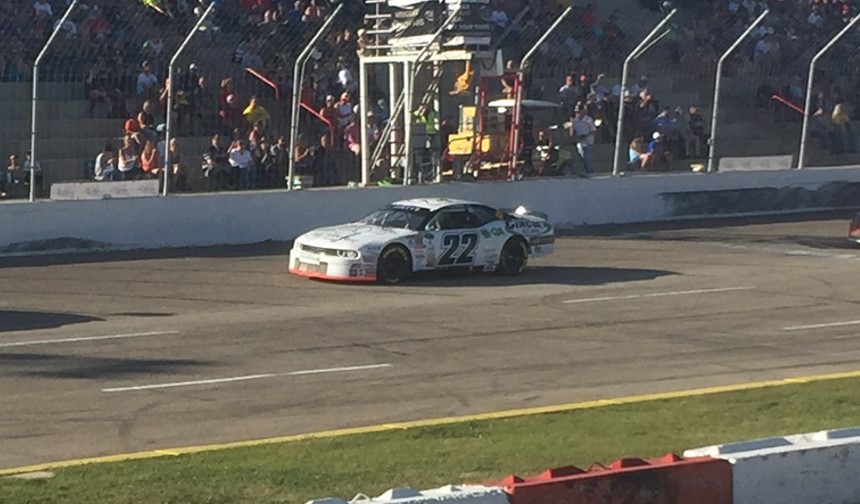 July 26, 2017:  For the first time in NASCAR Pinty’s Series 10-year history, a double header event was on the schedule.  The Velocity Prairie Thunder race at Saskatoon’s Wyant Group Raceway would be two 100 lap races paying full race points for each.

It was a busy day for the team’s starting with an hour-long practice.  Donald Theetge in the #22 Circuit Acura/Le Soliet/L’Antidote Media Dodge posted the 6th quickest time as he learned another new track. Tagliani struggled with the handling on his #18 EpiPen/Lowes Canada/St-Huberts/Spectra Premium Dodge and ended up 14th. His team went to work on it during the break in action to get it more to his liking for qualifying.

Next up was qualifying for the Velocity Prairie Thunder Twin 100`s and again Theetge went to work and notched the 4th quickest time while Tagliani`s crew made some adjustments to get the car better for him.  He was able to move up in the order and posted the 8th fastest time.

Race number one was a hotly contested event.  Theetge starting from 4th battled his way to 3rd and in the late stages was all over the back bumper of Kennington but was unable to make the pass for second.  A late caution resulted in a green, white, checker finish and Theetge was unable to hold 3rd and settled for a 4th place finish.

The race was marred by several caution periods and on lap 64, a car spun on the front stretch and slid back up onto the track leaving Tagliani no where to go.  The chain reaction incident caused extensive damage to his car. The #18 EpiPen/Lowes team went to work to make repairs but he was done for the first event.

Starting lineup for the second 100 lapper would be determined by the order of each drivers fastest lap in the first one.  This gave the #22 of Theetge the 6th position and the #18 of Tagliani the 8th starting position. Donald again battled in the top three or four for most of the 100 laps but a potential overheating problem sent him to the pits during a caution.  The team quickly diagnosed a faulty temperature gauge and he headed back to the track without losing a lap.  Theetge then restarted from the back of the field making his way up to 6th by the drop of the checkered flag.

Tagliani’s car looked more like an open wheel entry with no fenders and hood but the car appeared to be handling fine.  He was working his way up the field when taken out of contention by another competitor.  Tagliani rejoined the field outside of the top ten.  A valiant battle to get back up through the field saw him settle for a 9th place finish.

The final leg of the Western swing will take place on Saturday July 29that Edmonton International Raceway.  For tickets, schedule and event information please visit edmontonraceway.com