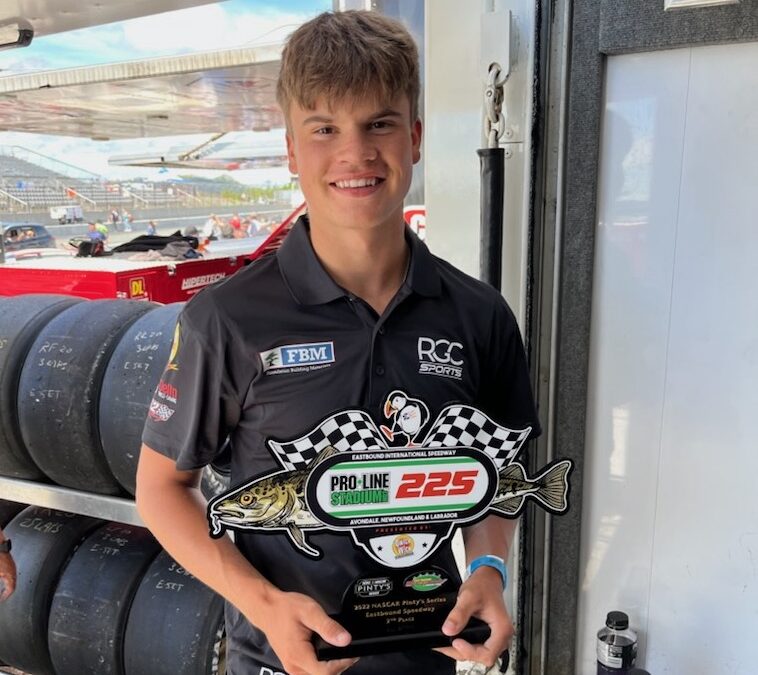 22 Racing’s dedicated truck drivers arrived in Newfoundland with the haulers on Thursday after their long journey East. The rest of the 22 Racing team arrived Friday and were eager to get to the track for the first time. The autograph session on Friday was a great start to the weekend.

On Saturday morning rain rolled in and delayed the practice session. When the rain stopped practice and qualifying were put together. Treyten Lapcevich established a great pace in his No. 20 RGC / Qwick Wick / FBM Chevrolet Camaro qualifying 2nd. Alex Tagliani qualified 13th. After practice it began raining again and the race was postponed to Sunday morning.

The 22 Racing team arrived back at the track early Sunday morning ready to go racing. At 11 a.m. NST (9:30 a.m. EST) the command to start the engines was given and the PRO•LINE 225 was finally underway.

The race featured quite a few cautions and red flags as some of the NASCAR Pinty’s Series drivers struggled to figure out a strategy for this new track. Lapcevich ran 2nd for most of the race as he tried to get around Marc-Antoine Camirand in 1st. Meanwhile, Tagliani was having some mechanical issues with his No. 18 Viagra / St Hubert Chevrolet Camaro.

There was a planned pit stop at the halfway mark allowing the drivers to fill up on fuel and get new tires. This also allowed the crew to make some repairs to the mechanical issues Tagliani was facing.

For the second half of the race Lapcevich continued to do everything he could to get around Camirand. “Almost got around the 96 on the top side he just kind of ran me into the wall about three restarts in a row, it made it really really hard to pass him there,” Lapcevich said. At the same time Alex Tagliani was starting to find his rhythm and was trying to work his way back from the laps down caused by the mechanical issues. “When we fixed everything up at the break the car was very competitive, we were running dead even with the leaders lap time so it was unfortunate that we couldn’t really show what the car had,” Tagliani said. Lapcevich ended up with a solid 2nd place finish and Tagliani finished the race in 15th without a chance to show his real speed.

Next the NASCAR Pinty’s Series and 22 Racing Team will be heading to the Streets of Toronto at Exhibition Place on Friday, July 15th.