A Top 5 Finish and Mechanical Problems For 22 Racing 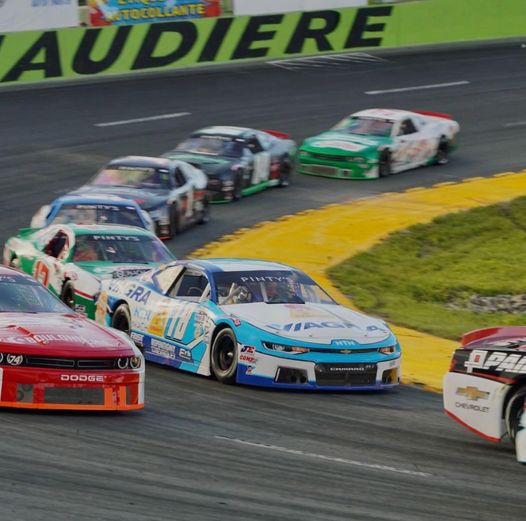 Vallée-Jonction, QC – Monday, June 13, 2022 – The long-awaited return of the NASCAR Pinty’s Series to Autodrome Chaudière with the largest car lineup since 2019 made for an exciting and entertaining race! The QwickWick 250 presented by St. Hubert saw Alex Tagliani finish 5th and Treyten Lapcevich finish 22nd after his evening ended early due to engine issues.

During practice Alex Tagliani set a good pace in his No. 18 Viagra / St. Hubert Chevrolet Camaro with the 9th fastest time. It may have been Treyten Lapcevich’s first time at Autodrome Chaudière but his oval-track experience came in handy, helping him get the fastest time in practice.

Before the driver’s autograph session could begin some rain rolled into the area and the 22 Racing Team was forced to cover the cars and wait out the rain.

Just after 6 p.m. the command to start the engines was given and the QwickWick 250 presented by St. Hubert was finally underway.

The race featured many cautions as Tagliani and Lapcevich worked their way up through the field. On lap 101 Lapcevich’s car began smoking and he was forced to bring it into the pits. The 22 Racing Team attempted to fix the problem, but quickly realized that unfortunately the day was over for Lapcevich and his No. 20 car due to engine troubles.

There was a planned pit stop at lap 126 to allow teams to fill up on fuel and get 4 new tires.

After the halfway mark, four more cautions and a red flag pushed the race into overtime. Tagliani held onto his position and was able to finish 5th as a caution flag and a checkered flag ended the race early.

Next The NASCAR Pinty’s Series and the 22 Racing Team will be heading to Eastbound International Speedway in Newfoundland on Saturday, June 25 for the Pro Line 225 presented by QwickWick.