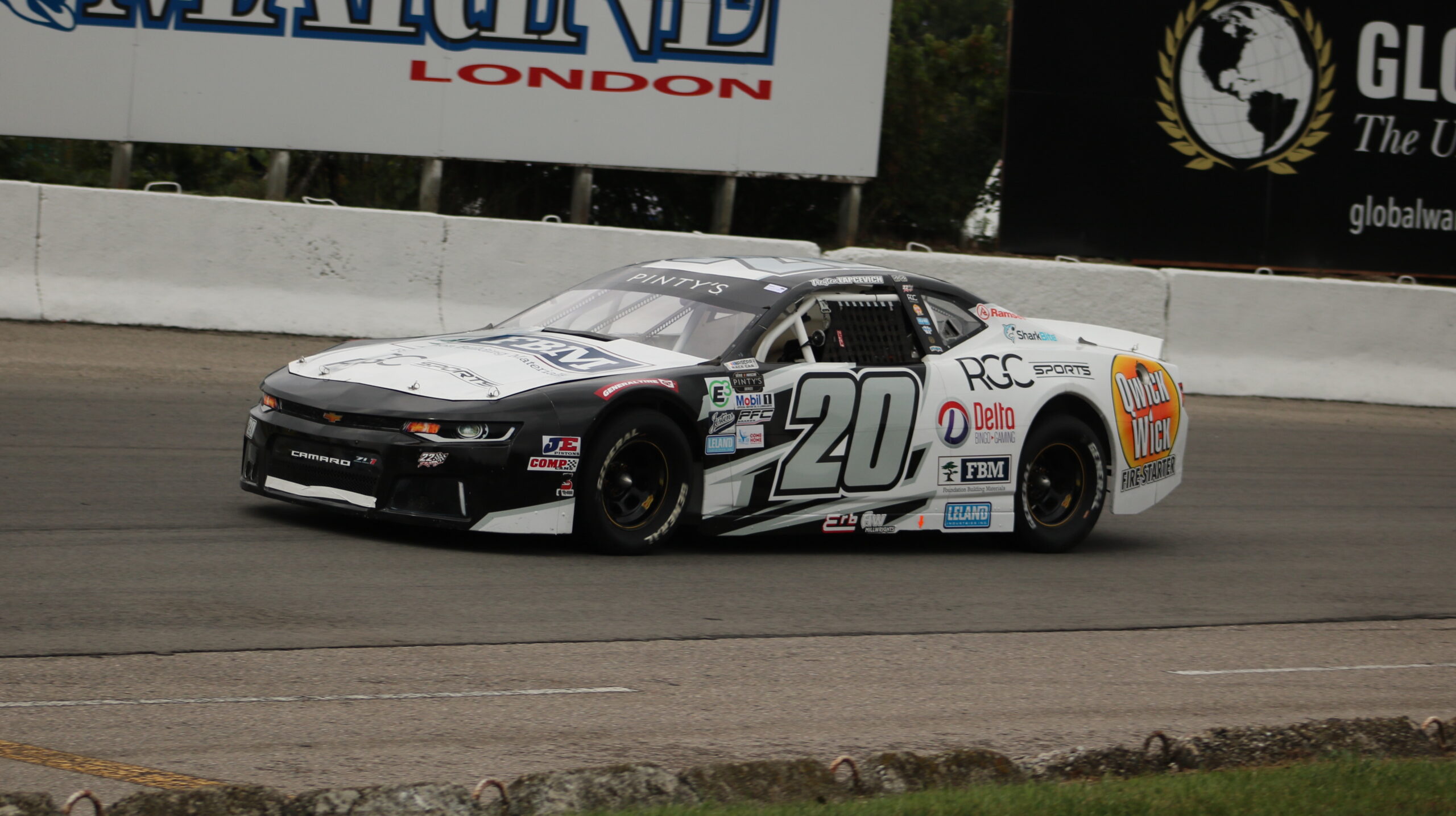 Milverton, ON – Monday, September 26, 2022 – On Sunday evening the NASCAR Pinty’s Series 2022 Season came to a close with the final race at Delaware Speedway. Treyten Lapcevich finished 4th and Alex Tagliani finished 20th after being involved in a wreck. Newcomers Kyle Steckly and Ray Morneau joining the 22 Racing stable for this event both experiencing mechanical difficulties, Steckly finishing 16th and Morneau finishing 17th.

Raceday kicked off with practice, which saw Treyten Lapcevich take the fastest time, Alex Tagliani take 4th fastest, Kyle Steckly take 10th fastest, and Ray Morneau take 13th fastest. During qualifying the 22 Racing drivers established an impressive pace, with all 4 drivers qualifying in the top ten! Lapcevich qualified 4th, Steckly qualified 6th, Tagliani qualified 9th, and Morneau qualified 10th. At 4:30 p.m. the race was about to start when rain decided to roll in and push us into a rain delay. After the rain stopped and the track dried, the command to start the engines was given and the 250-lap Pinty’s Fall Brawl was underway.

Near the beginning of the race Ray Morneau and his No. 03 John Aarts Group Chevrolet Camaro quickly made their way up to 6th position, but on lap 8 a power steering line broke and forced Ray into the pits pushing him laps down. Once the car was repaired Morneau worked on fighting his way back. “We got a couple of our laps back and then just couldn’t get anything else from there, so just riding in the back trying to get through traffic, soon as you do you get a caution and you’re sent back to the back, so it was a little bit of a frustrating night but the car is in one piece and that’s the main thing. Looking forward to hopefully getting another opportunity to do this,” Ray Morneau said.

Throughout the race Alex Tagliani held his line and worked on gaining positions. Tagliani and his No. 18 Viagra / St Hubert Chevrolet Camaro were catching the front runners and keeping pace with the top five cars but got caught up in the massive wreck that happened in the second half. “I went wide to avoid the chaos, it started when I got hit by the 96 and got me into the wall and after that the 27 went over us,” “it damaged the car pretty bad so it’s unfortunate, not really the way that we wanted to finish the season for the team but sometimes you are in the wrong place at the wrong time,” Alex Tagliani said.

Kyle Steckly and his No. 22 APC Auto Parts Centres Chevrolet Camaro worked on finding their groove in the first half of the race and the car seemed to be handling better in the second half. After avoiding the big wreck things were looking good for Steckly, but unfortunately something broke in the right front, ripping the wheel out of his hands and not turning, ending his night. “We had quite a bit of speed and I’m still learning these cars so just thankful for the opportunity and definitely going to grow from it and hopefully we can improve next time out,” Kyle Steckly said.

Treyten Lapcevich was able to stay near the front of the field despite facing brake problems during the first half of the race. At the halfway pit stop the team was able to make some adjustments to the car, but the hard racing that was to come made the second half no easy feat for Lapcevich. “At halfway it was kind of gloves off already, there were guys all over the place, we got put three-wide and lost some track position. We got hit in the tire pretty hard once and that just knocked the toe out and set me up for a rough 125 laps to end it. All in all I think a top-five to end the season for our FBM / RGC Sports / Qwick Wick number 20 is really good,” Treyten Lapcevich said.

With the 2022 season officially over Treyten Lapcevich finished 4th and Alex Tagliani finished 5th in the Championship points standings.

This season the NASCAR Pinty’s Series raced on oval tracks and road courses in Ontario, Quebec, Newfoundland, Alberta, and Saskatchewan. For more information and updates, please visit www.22racing.ca and NASCAR.ca.