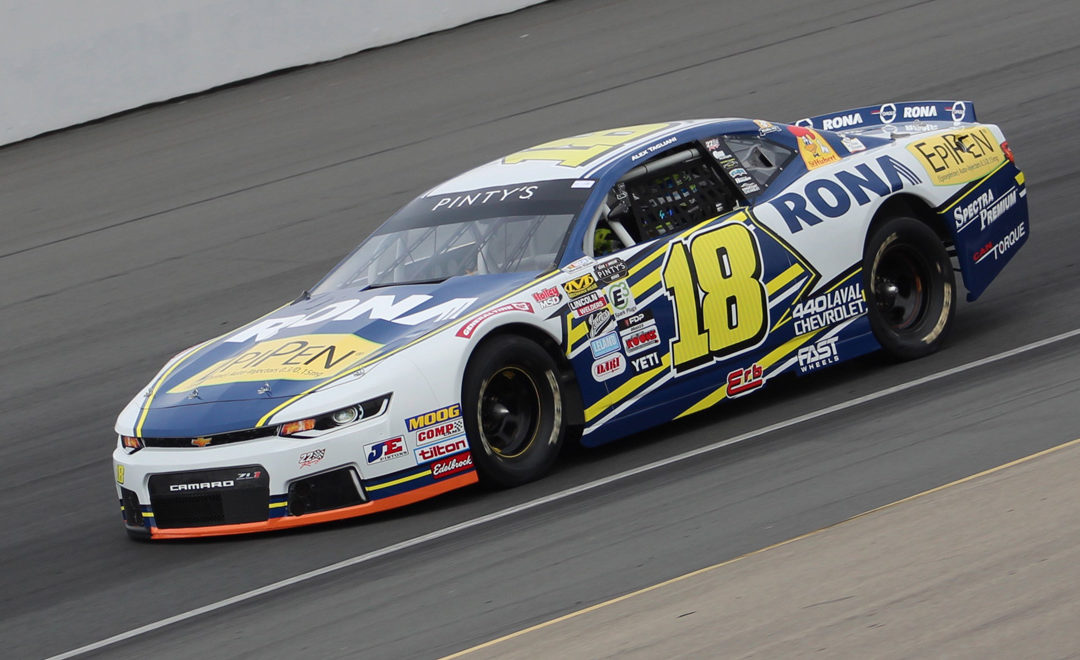 Montreal, June 2, 2019 – Alex Tagliani finished fifth in Sunday’s Round 2 of the 2019 NASCAR Pinty’s Series held at the 0.625-mile Jukasa Motor Speedway oval track located in Hagersville, near Hamilton, Ontario. The APC 200, the first oval track race of the season, scheduled to run Saturday night but postponed to Sunday due to rain, was won by Andrew Ranger of Roxton Pond, Quebec, ahead of Kevin Lacroix and Peter Shepherd III. LP Dumoulin and Tagliani rounded up the top five. Tag crossed the finish line only nine tenths of a second behind the winner.

Tag qualified fifth for the APC 200 on Saturday and ran his Team 22 Racing #18 Chevrolet EpiPen-RONA/St Hubert as high as fourth on lap 80 of 200 but was unable to fight for the lead at the end of the race.

“This top-five finish is a positive result after such an eventful race,” commented Tagliani following the APC 200. “Unfortunately, we did not have the proper setting on the car for this track. Compared to last year where we were looking for a setting that would help us turn the corners because we were understeering, this time the number 18 EpiPen/RONA/St Hubert/Spectra Premium was way oversteering with the rear end always wanting to pull out.

“Even under these conditions, we managed a top five finish, which leads us to believe that if we overcome these minor problems, we should be able to fight for many wins in the races ahead on the schedule. Following our hard luck finish at Canadian Motorsport Park in round one, points garnered today with this fifth-place finish at Jukasa are very important at this stage of the season. Members of Team 22 Racing were awesome during our pit stops. We even managed to gain a position during our last stop. Since I wanted to save our tires because of the car set up, I did not charge as much I would have at the end of the race. Overall, it was a very good team effort. This is a long season and we will adjust.”

Eighteen cars started the APC 200 with 14 cars running at the finish, 11 on the lead lap. The race was under full course caution seven times for a total of 48 laps. There were five lead changes among five drivers.

Round 3 of the 2019 NASCAR Pinty’s Series will be held June 29 at 8 p.m. at Autodrome Chaudière located in Valley Junction, south of Québec City.

In the Drivers Championship, Tagliani has moved up from 10th to fourth place, 18 points behind leader Andrew Ranger. In five NASCAR Pinty’s start at Jukasa, Tagliani has collected, two top-five and four top-ten finishes. In 73 NASCAR Pinty’s starts, Tag has recorded nine poles, won 8 times, finished 31 times in the Top-5 and 49 times in the Top-10.