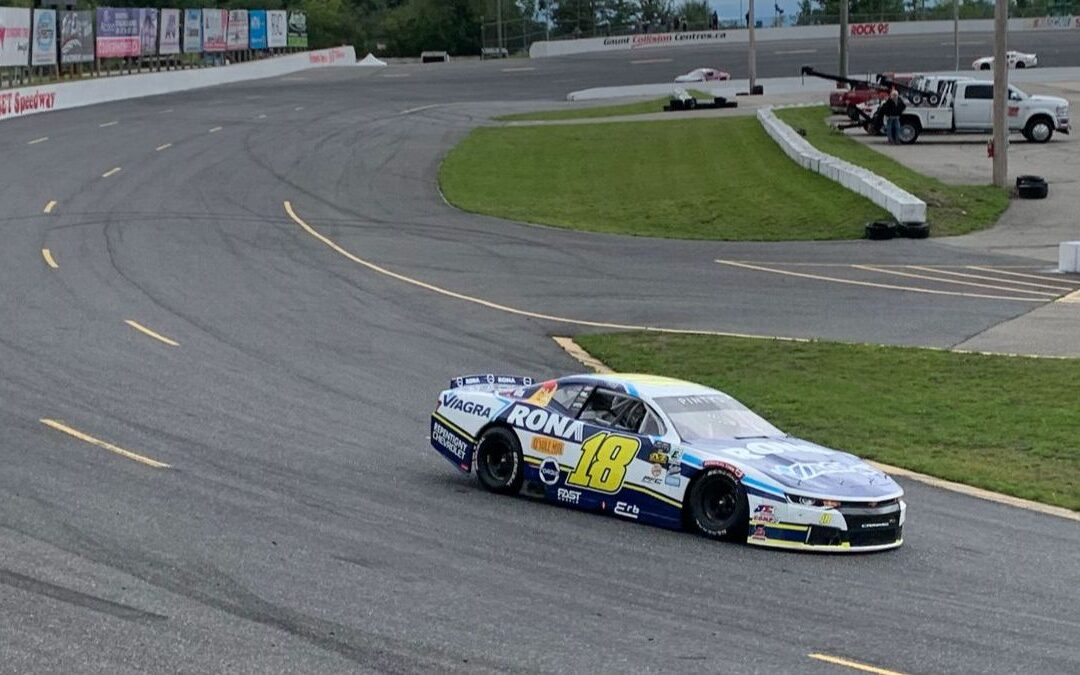 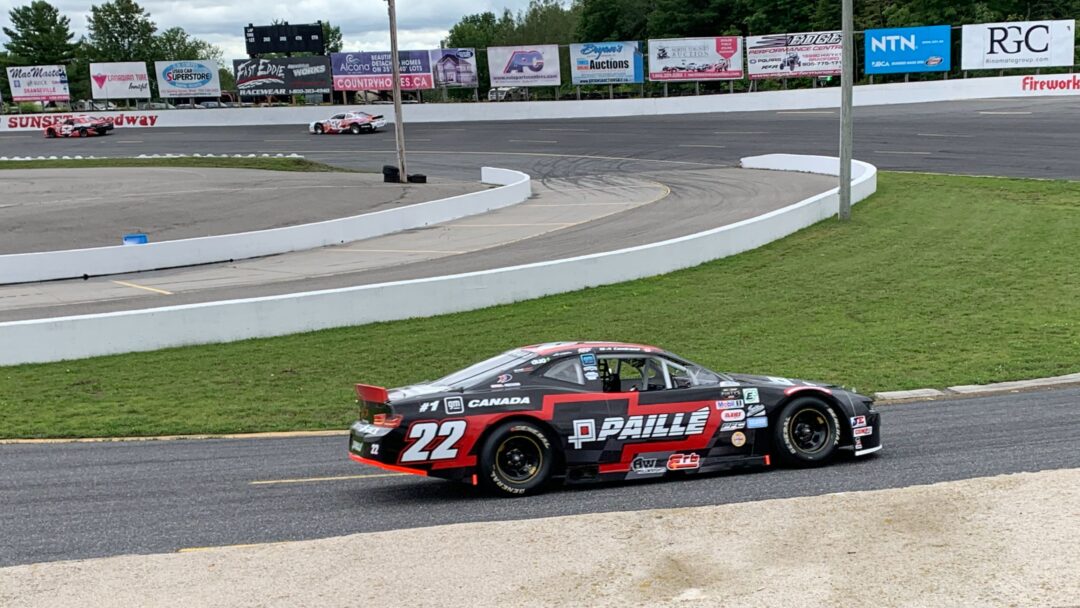 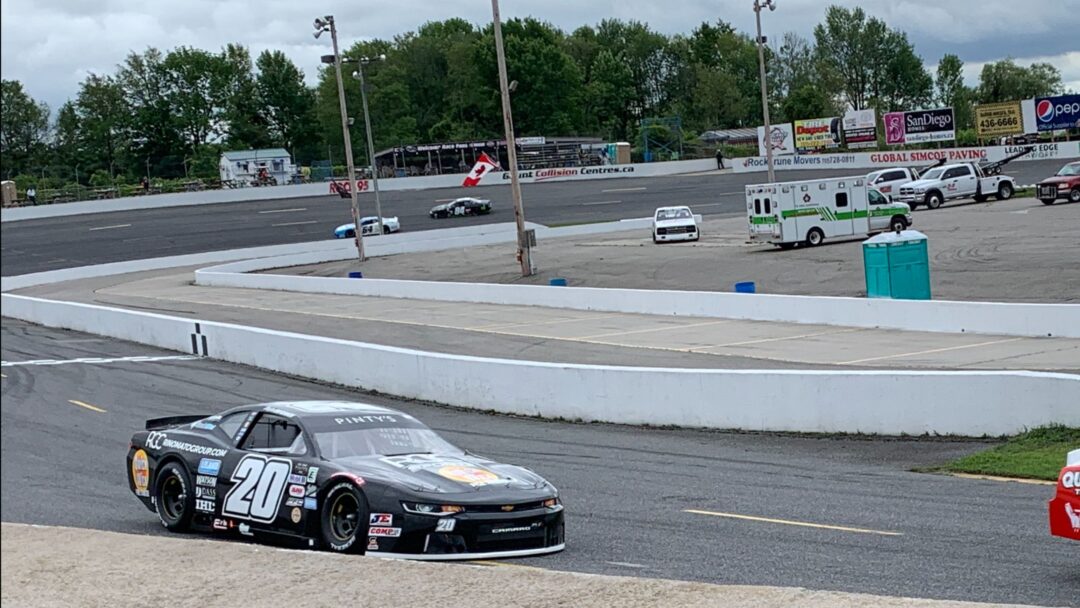 The loyal fans in the stands at Sunset Speedway and new live stream viewers in Canada and south of the border were treated to two action packed races as a reward for persevering hours of rain delays.

Qualifying for the Frontline Workers 125 took place under overcast skies saw rookie Treyten Lapcevich in the No 20 RGC Sports/Qwick Wick Chevrolet earn second fastest of the session. Alex Tagliani, behind the wheel of the No 18 RONA/Viagra/St. Hubert Chevrolet posted 8th fastest and right behind him Marc-Antoine Camirand in the No 22 GM Paillé Chevrolet in 9th.

After the long-awaited start to the season the command to start the engines was given and the Frontline Workers 125 was finally underway with the youngest member of the 22 Racing NASCAR Pinty’s Series team roster Lapcevich taking the lead on the third lap.

With only 7 laps in, the race was red flagged for rain. Many fans and sponsors didn’t let the on-again, off-again precipitation dampen their spirits, using the time to reconnect after a year and a half of being away from the track.

After a nearly four-hour delay the drivers were called back to their cars and shortly after the engines were re-fired to get the race underway again. After running over 30 laps under caution to help dry the track, Lapcevich regained the lead and Tagliani battled for fourth with the sun beginning to set in the distance.

On lap 84 under yellow Lapcevich was leading with Tagliani in 6th and Camirand in 8th.
On the restart the 20 machine of Lapcevich got turned battling for the lead from the outside. Tagliani continued his charge to the front with Camirand fighting to stay in the hunt after some major body damage to the rear of the 22 car that occurred on lap 80.

Tagliani brought home the No 18 RONA/Viagra/St. Hubert Chevrolet in third with Camirand holding on for 7th and early leader Lapcevich rebounding to cross the line in 9th.

Tagliani couldn’t celebrate his first podium finish of the season as teams were allotted only thirty-minutes to make adjustments and repairs before the second race of the doubleheader, the General Tire 125.

At just after 10 p.m. local time fans, special guests and live stream viewers buckled in for the General Tire 125, that was sure to be another barnburner of a race. Starting from the third row both Tagliani and Lapcevich took the green flag, with Camirand tucked in close behind, began their charge to the front.

The second race of the evening began to unfold as if it was the final race for the Championship title. By lap 50, Lapcevich was up to third and Tagliani to 5th. By lap 65 Camirand had worked his way up to fifth with Tagliani in third and Lapcevich in second with his sights on the leader.

With twenty-five laps to go Lapcevich began to experiment with line choice to close the gap on the leader. Tagliani continued his unrelenting battle with the No 17 car for third and Camirand continued to demonstrate great speed and showed no signs of letting up.

Hungry to take the win at Lapcevich’s home-track he only had a few laps left to claim his first career win and attempted a pass. The 17-year-old rookie and the leader ended up touching and Lapcevich went around. On the last restart he put his head down making numerous passes to bring home the No 20 RGC Sports/Qwick Wick Chevrolet in fourth place at the line.

“I’ll admit its frustrating. I feel we had the fastest car here tonight. We ended up getting a little loose, and the 80 was loose as well at the end of the second race.” said Lapcevich. “Thanks to my crew for all their hard work and giving me a rocket ship.”

Hoping to better his third-place result in race No 1, Tagliani fought hard and did his utmost to navigate limited passing opportunities after sliding back in the field and brought home the No 18 RONA/Viagra/St. Hubert Chevrolet in 9th place.

Grabbing a snack in the hauler after a very long day Tagliani commented; “That is racing my friend…” and went on to acknowledge that significant progress had been made in some areas of the No 18 car and more work still needs to be made in other areas before returning to the ovals.

Battling for a top five early in the race, Camirand found himself stuck on the outside line during restarts. The pilot of the No 22 GM Paillé Chevrolet demonstrated a good pace throughout the race.
The caution flag flew with only a few laps to go triggering NASCAR overtime. On the very last turn of the last lap of the General Tire 125 Camirand was hit from behind making him lose control of his GM Paillé Camaro. He persevered to take the checkered flag in 12th place.

Much like his No 22 GM Paillé Camaro, Camirand was visibly battle-worn and frustrated but remained positive.

“We demonstrated we’re competitive even though we didn’t get the top-five result we were capable of. The team and I are even more motivated to take home a good result for GM Paillé and the team from the Grand Prix de Trois-Rivières in two weeks.”

After rain delays, variable track conditions and intense battles the 22 Racing oval program has taken an important step forward thanks to the dedicated crew at the shop and at the track.

With two intense races in the books each lap and finish matter in the 2021 NASCAR Pinty’s Series point standings; Lapcevich currently holds third with 77, Tagliani in fourth with 76 and Camirand in tenth with 69 points. Lapcevich also leads the 2021 Jostens Rookie point standings.

The next challenge facing the team and its roster of highly skilled drivers will be taking on the legendary streets of Trois-Rivières for the Grand Prix de Trois-Rivieres August 15, 2021.