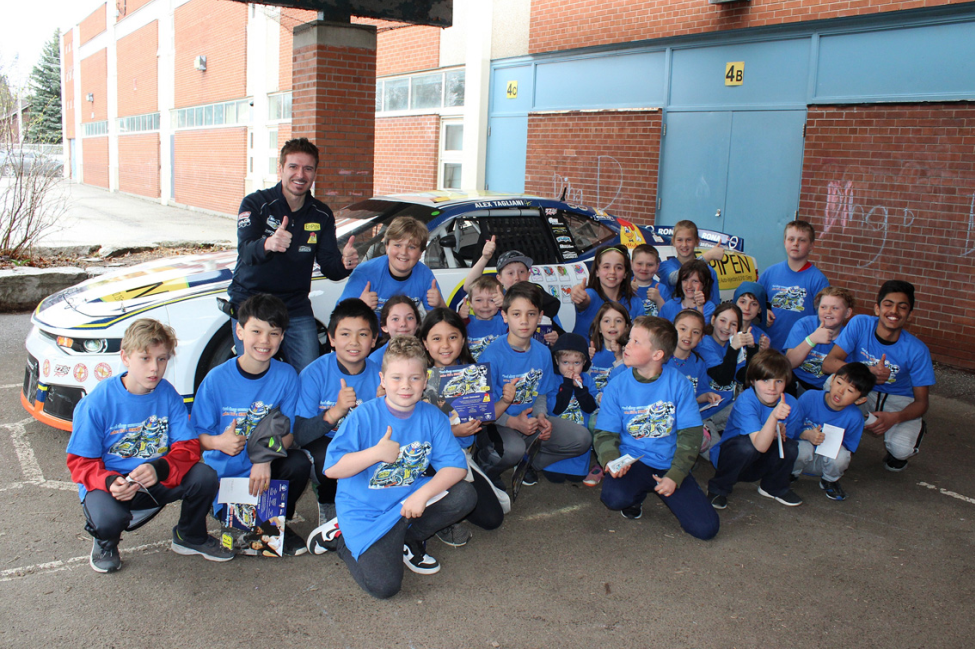 Montreal, May 16, 2019 – Because it has been a long winter, and since spring is late coming to warm everyone up, Alex Tagliani is eager to get back on the road again to put the heat on his NASCAR Pinty’s Series competitors this weekend in the 2019 season opener at Canadian Tire Motorsport Park (CTMP). In last August’s race at CTMP, Tagliani finally found redemption on the 3.957-km famed Ontario road course that had long denied him, when he won ahead of Kevin Lacroix. Having lifted the jinx, Tag hopes to once again see the chequered flag first on Sunday, May 19. Clarington 200 race time: 1:30 pm.

Earlier this month, Alex Tagliani kicked-off Food Allergy Awareness Month with youth from Toronto’s Kimberley/Beaches Alternative School who helped him modify the livery of his new “Picasso style” #18 Chevrolet EpiPen-RONA/St Hubert race car with decals, which will be unveiled to the public this weekend at CTMP. Racing for the cause in the season opener, Tag has invited 20 youngsters who suffer from food allergies trackside to watch the car they designed perform on the road course.

“In last year’s season opener at Canadian Tire Motorsport Park, I was leading the race with three laps to go when the car suffered a mechanical breakdown,” said Tagliani, “and in the August round, we won the NASCAR Pinty’s race. So, I have a great feeling about this year’s opening race. It’s very important to start the new season on a strong note so that we don’t end up chasing the point’s leader all season long like we did last year following a disappointing finish in the first race of the season.

“It’s a new season, and the series has come out with an important change with the introduction of a new tire manufacturer that is offering us an improved compound base tire that will enable us to run more than two seconds faster on tracks like CTMP. This new racing rubber should increase the level of performance and give fans a better show. However, all teams will have to change their race strategies because these new softer tires could wear out more quickly that the old ones. The last laps of the races should be more exciting and will be full of shockers.

“Something also new for Team 22 Racing #18 Chevrolet EpiPen/RONA/St Hubert is that we will now be using a new Spectra Premium radiator that will give us better performance. We are ready to fight for the championship with all our might and I am eager to start the season,” concluded the 2015 Canadian Motorsport Hall of Fame inductee.

Last year’s series runner-up, who tested the new General Tires compounds on April 25 and 30 at CTMP, was pleased with the new rubbers, but thinks that all drivers will need to modify their driving style in order to save their car’s tires so there will still be some performance left in them at the end of each race.

For the first time, TSN and TSN Direct subscribers will be able to watch six NASCAR Pinty’s Series races live on tsn.ca and the TSN App. The live streams kick off with the season opening Clarington 200 at Canadian Tire Motorsport Park (CTMP) (May 19, 1:30 p.m,). Races in Toronto, GP3R, CTMP (August), New Hampshire and the season finale at Jukasa also will be streamed live.

In eight NASCAR Pinty’s start at CTMP, Tagliani has a pole, one win, three top-five and four top-ten finishes. He hopes to improve on his record by adding a couple of firsts: a pole and a win.

Alex Tagliani, inducted in 2015 as a member of the Canadian Motorsport Hall of Fame, is also known by his racing name TAG. He developed a passion for racing at the age of 10 when he was introduced to karting on a visit to see his paternal grandfather in Northern Italy. The Canadian driver has shown his fans that he can drive anything ‐ from Indy Car to NASCAR to a prototype. Since the beginning of his career in open wheel racing, NASCAR, and IMSA, Alex has accumulated 23 wins and over 120 top‐10 finishes. A fierce competitor, Alex has many passions including training and nutrition and always takes precautions when managing his life‐threatening allergies to peanuts and tree nuts, including carrying his EpiPen® (epinephrine) Auto-Injector.

Image of Alex Tagliani’s Team 22 Racing car with some of the youth who redesigned his car “Picasso style”.