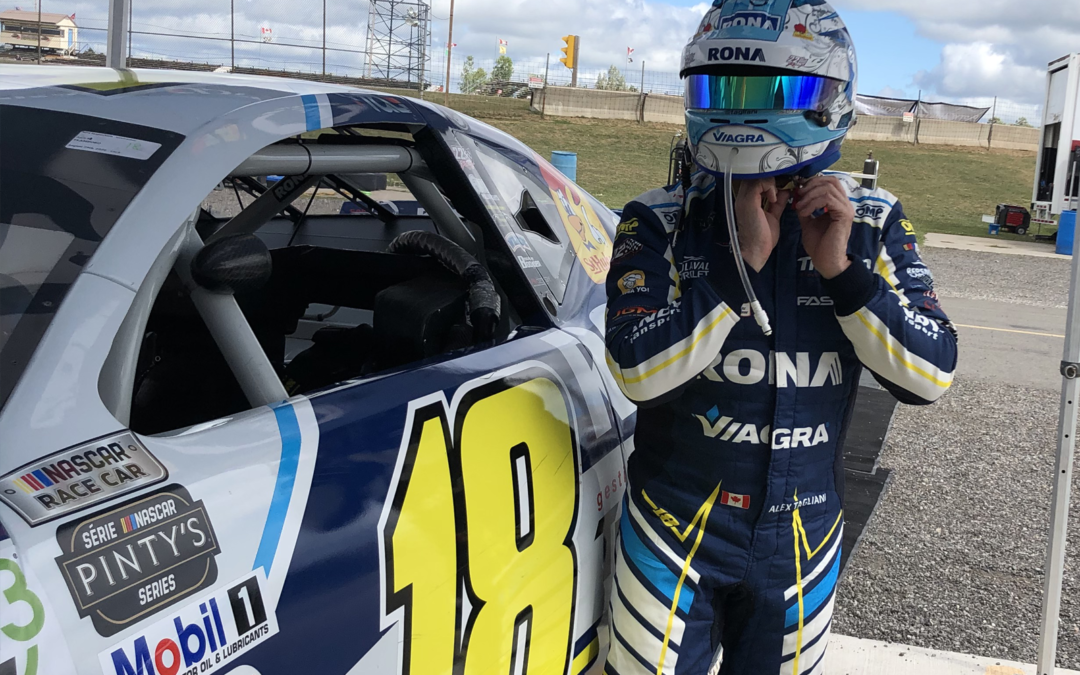 Montreal, August 30, 2020 – Alex Tagliani competed on a new track in his first 2020 NASCAR Pinty’s Series race held Saturday, August 29 at Flamboro Speedway’s one-third mile oval track located near Millgrove, Ontario. Away from the series 2020 opening race two weeks ago at Sunset Speedway, the Quebec driver quickly went to work when he finished fourth in the Pinty’s 125, the first of two races on Saturday’s double header. In the test session earlier that afternoon, he was top Quebec finisher with a fourth place.

“For both races at Flamboro Speedway, luck was not on our side when they drew numbers for starting positions for both races when I picked up 10th place for the Pinty’s 125 and ninth position on the grid for the PartyCasino 125,” said Tagliani. “Those were not great spots because it is a one lane track where it is hard to pass. Just think that the two winners led all 125 laps in each of their race.”

“We had a pretty good car in our Pinty’s 125 race because I was able to climb the latter up to fourth place without a scratch on the car. The Chevrolet Camaro number 18 RONA / VIAGRA / CanTorque ran very well in the long stretches under the green flags, but when the race reached lap 75, I noticed that some cars ahead of me where loosing rhythm and that I had an advantage over them. I took it. But later when I got close to the top three, I saw they had cars similar to mine and it would have been pretty risky near the end of the race to try any silly moves. We finished in fourth place on my return to the Pinty’s Series and that’s fine.”

In the second event late on Saturday afternoon, Tagliani finished sixth in PartyCasino 125 after making several changes to his car between the two races.

“We decided to make some changes to the car for the second race of the day, but we stretched it a bit. Even then, I think it was a necessary move because we are still in search mode to find the best set-ups for the car, Making moves and being wrong tells us about the good and bad adjustments we need to make in the future. During one of the small battles in the race, I hit the wall coming out of Corner 2 and it affected the steering gear, which slowed down my progress. So I had to settle for sixth place in the PartyCasino 125.”

“I am still satisfied with both results. We are much better than last year in car set-ups at the end of our first two races. We are still looking for that one-tenth of a second missing on the Chevrolet to make it more competitive.”

“Unlike Flamboro, the next two races at Jukasa in two weeks time will be held on a track that 22 Racing Team knows well and we will be able to better compare changes we will make to the car,” concluded Tagliani.

The winners of the two rounds at Flamboro Speedway were Jason Hathaway in the opening Pinty’s 125 and Kevin Lacroix in round 2. Winners led the whole 125-lap race from the green to Victory Circle during each of their win.