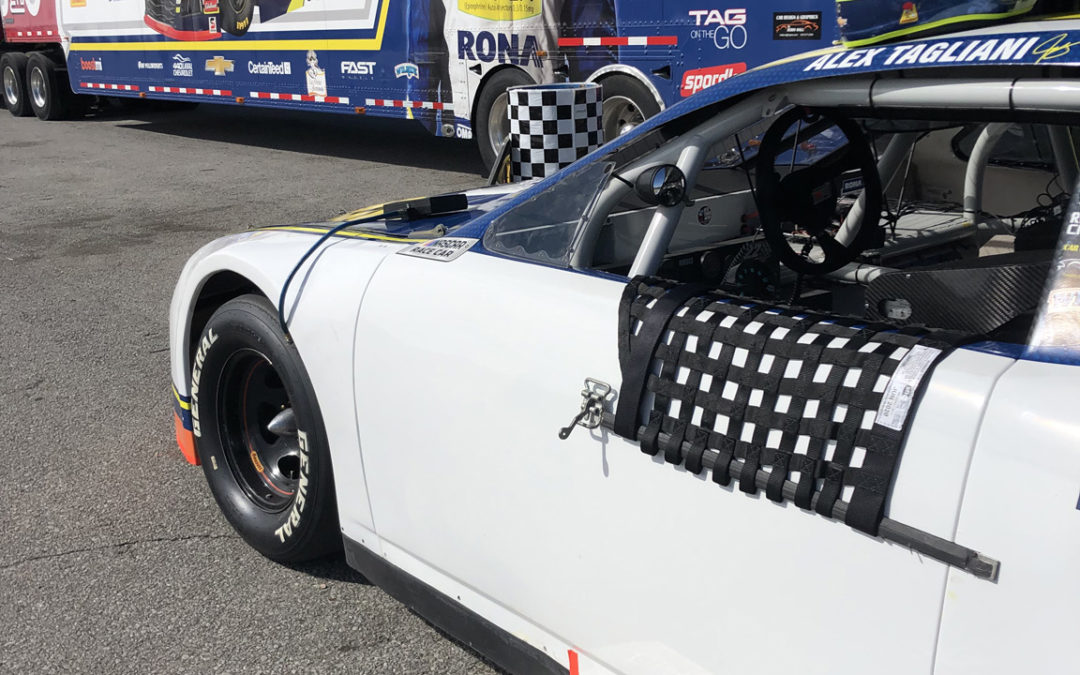 Montreal, April 29, 2019 – Racecar driver Alex Tagliani was pleased with what he experienced while driving his team 22 Racing #18 Chevrolet EpiPen/RONA/St Hubert shod with the new General Tire racing tires during a test session on April 25, at Canadian Tire Motorsport Park (CTMP) located north of Bowmanville, Ontario. Beginning with the first race of the season, the NASCAR Pinty’s Series will use specially-built racing tires for the first time in its Canadian history.

“I think it’s a great idea that the NASCAR Pinty’s Series officials went ahead with the introduction of a new racing tire for the 2019 season,” said Alex Tagliani following the test session organized by newcomer General Tire. “Because competition in our series is quite intense, I think we were ready to move from regular rubbers to more competitive and better performing racing tires that will let us put on a better show for our NASCAR Pinty’s fans. That’s what came to mind after a few laps on the new rubber. The car was faster, and that led me to think that most, if not all Pinty’s Series track records will be broken this coming season.”

“I also think that a softer compound tire built for racing will most likely wear out faster, which in turn will make for more interesting races, more passing and most likely more exciting race finishes. Saving tires during a race will become a concern to both teams and drivers if they want to score maximum points. For these reasons, I think we’re on the eve of an exciting season with the General Tire new racing rubbers,” concluded last year’s point’s championship runner-up.

Alex will be back on track at Canadian Tire Motorsport Park on Tuesday, April 30, between 4:15 pm and 6:15 pm, for a NASCAR Pinty’s Series Test and Tune Day. Media who wish to attend and speak with Alex in the paddock area are asked to RSVP admission to the track with Jerry Priddle at 416-312-9491 or at jerrypriddle@accelm.com. Media unable to attend the event but wishing to speak with Alex on the phone between noon and 3:30 pm, can contact him directly or call Max d’Orsonnens at 514-246-8909 to set up an interview.

Media interview possibilities with Alex Tagliani on May 1

On another subject, Food Allergy Canada Ambassador Alex Tagliani will visit Kimberley/Beaches Alternative School in Toronto on the morning of May 1st to help kick-off Food Allergy Awareness Month and promote allergy awareness. Together with students, Alex will be designing his 2019 NASCAR season opener #18 Chevrolet EpiPen/RONA/St Hubert racecar, which will be onsite at the school. Alex will unveil the car to race fans at the first NASCAR Pinty’s Series race on May 19th at Canadian Tire Motorsport Park in Bowmanville, Ont., where students will be invited to attend to see the race trackside. On May 1st, Alex will again be available for phone interview. Please contact Christopher Holcroft at 416-996-0767.