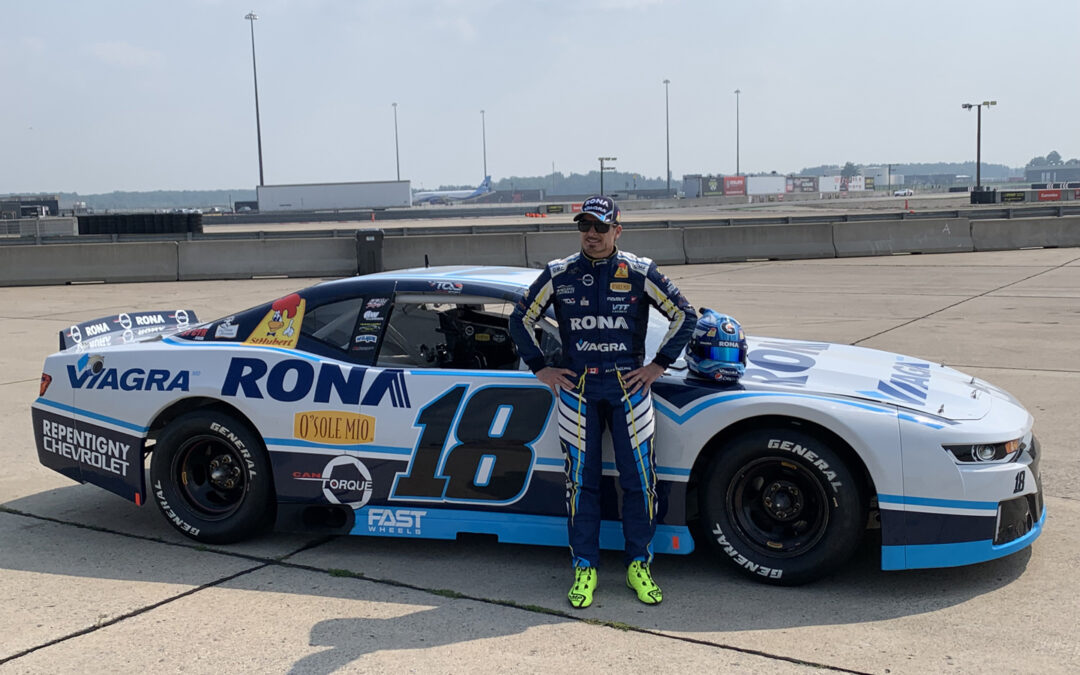 Montréal, July 30, 2021 – Racecar driver Alex Tagliani will start his 2021 NASCAR Pinty’s Series season this Sunday on the 1/3 mile paved oval (0.333-mile) at Sunset Speedway located in Innisfil, Ontario. This track has been magical for the driver of the #18 Chevrolet Camaro RONA – Viagra – St-Hubert who is the defending NASCAR Pinty’s Series race winner. In 2015 in his race at Innisfil, he scored his second win in this series, but his first since returning full time in NASCAR Canada competition in 2014. To top this win, he lapped he whole field before crossing the finish line. A feat in this series…

The following year, he repeated with a second consecutive win on the same track. The first leg of the 2021 season at Innisfil, the Frontline Worker 125, a 41.66 miles race, will start Sunday at 4:50 p.m. and the second round, the General Tire 125, around 6:20 p.m. Practice will start Sunday at 12:30 and finish at 1:15 p.m. and the two-lap qualifying session for the first race will be held between 2:30 p.m. and 3:00 p.m. Starting position for the second 125 race will be determined by each car’s best lap time during the first Twin 125 lap race. No planned race pit stops are scheduled during the races.

NASCAR.ca will have live coverage of each event, including live timing and scoring, on Race Center.

“This is exiting for me to start the 2021 NASCAR Pinty’s championship season at Sunset Speedway, because it brings back great memories,” mentioned Tagliani. “My last two races on the oval track at Sunset, TAG Motorsport/Team 22 Racing dominated and won both events. As a matter of fact, in my first race there in 2015, my Chevrolet #18 lapped the entire field and I became the first driver in the NASCAR Pinty’s Series history to cross the finish line with a lap lead. In my second race at Sunset the following year, the pack was quite aggressive and more competitive, but I still manage to win the 300-lap race.”

“However, race seasons come and go and they tend to change a lot. Over the past few years, the series has made several changes but the most significant one in my mind was the arrival of a new tire manufacturer, which changed how my car reacts on oval tracks. Team 22 Racing worked hard all winter to improve my Chevrolet Camaro RONA – Viagra – St-Hubert. On the eve of this new season we still cross our fingers but it is a good thing to go back on a track that has brought me great successes in the past,” concluded Tagliani.

The NASCAR Pinty’s Series returns with a racing season for 2021 with 11 races on its schedule and Alex Tagliani is ready to go. This Sunday, he will be at the wheel of his Chevrolet Camaro RONA – VIAGRA – St-Hubert for the opening two rounds at Sunset Speedway in Innisfil, Ontario were he won in 2015 and in 2016.  Fifteen days later on Sunday August 15, it’s the annual Grand Prix de Trois-Rivières, always filled with door-to-door and bumper-to-bumper restart thrillers. This is the first of the busy part of the schedule for Alex with the Pinty’s Series in Quebec. On Saturday, August 28, round 4 of 11 of the 2021 schedule will be held on the new oval track at Circuit ICAR in Mirabel and the next day, Autodrome Chaudière in Junction Vallée located south of Québec City will host the second twin race of 2021.

Then, the season will end in September with five races in Ontario. A double header awaits Tag and Team 22 Racing at Canadian Tire Motorsport Park road course in Bowmanville on Saturday, September 4 and on Sunday the 5th. This double header will be followed by another one a week later with a twin 125 at Flamboro Speedway in Millgrove, Ontario. Fifteen days later, it’s the season finale at Delaware Speedway with the Pinty’s Fall Brawl.