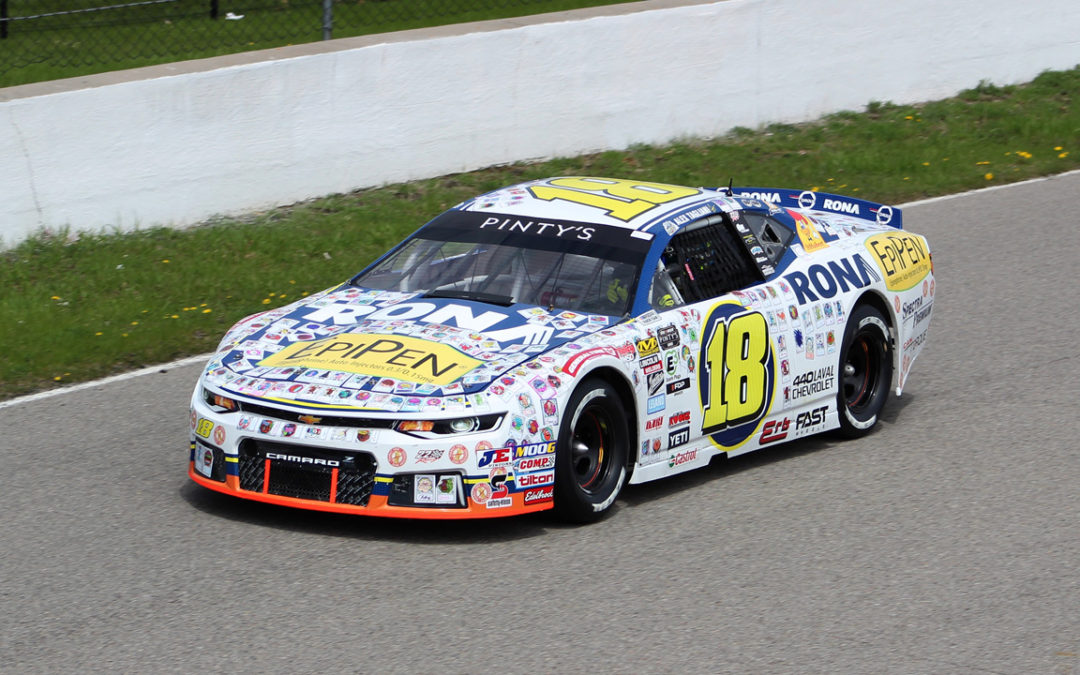 Montreal, May 20, 2019 – Alex Tagliani did not have the kind of day he was hoping for in the opening round of the 2019 NASCAR Pinty’s Series held at Canadian Tire Motorsport Park (CTMP). Disappointing, was the word that came to mind when he crossed the finish line in 11th place, 10 seconds back of race winner Kevin Lacroix. The Montreal native had a day full of ups and downs in Sunday’s Clarington 200, running among the leaders at the start of the race after qualifying third on Saturday.

A race contact in the last corner of lap 3 on the 3.957-km famed Ontario road course sent Tag into the pits with a right rear shredded tire and causing him to rejoin the field in 23rd and last place. But, he fought back to lead the race on lap 17 of 51 when the leaders pitted to change their General Tire rubbers. The Team 22 Racing #18 Chevrolet EpiPen-RONA/St Hubert led for the next eight laps but since Tag was off sequence with the leaders, he now had to choose the moment to pit. He did at the start of lap 36, but just as the track was going green.

“This is not the kind of situation we were looking for to start the 2019 championship hunt,” said Tagliani, “but in the end, it could have been much worse with everything that went wrong today. In the opening laps, I was involved in a racing incident that shredded my right rear tire that tore parts of the body of my Chevrolet Camaro on my way to the pits. We made a few stops to repair the damage and I finally rejoined the field in last place, but still on the leader’s lap.

“Since the team had filled the car with fuel during my early stops, we decided to stay on track when the leaders pitted. Following that decision, I found myself leading the race for eight laps. The car was still competitive, holding on to third place. While the race was under full course caution, I hesitated too long before pitting for fuel and tires. At the last moment, I decided to pull into the pits, but I crossed the commitment line which resulted in a penalty that sent me back to the rear of the field once again. I managed to move up to finish 11th overall.

“A day full of situations that I need to avoid in the future if I want to win. Let’s hope we have a better day at Jukasa,” concluded Tagliani.

Twenty-three cars started the Clarington 200 with 20 cars running at the finish, all on the lead lap. The race was under full course caution five times for a total of 23 laps. There were six lead changes among five drivers; Tagliani led eight laps.

The APC 200, round 2 of the 2019 NASCAR Pinty’s Series will be held June 1 at 8 p.m. at Jukasa Motor Speedway oval track located in Hagersville, near Hamilton, Ontario.

Disclaimer:  This media release is intended strictly for sports information purposes only and does not in any way compel or imply any commercial offer.  Should you no longer wish to receive these releases, please open the attached “Unsubscribe Me . doc” document and click the Unsubscribe Me link