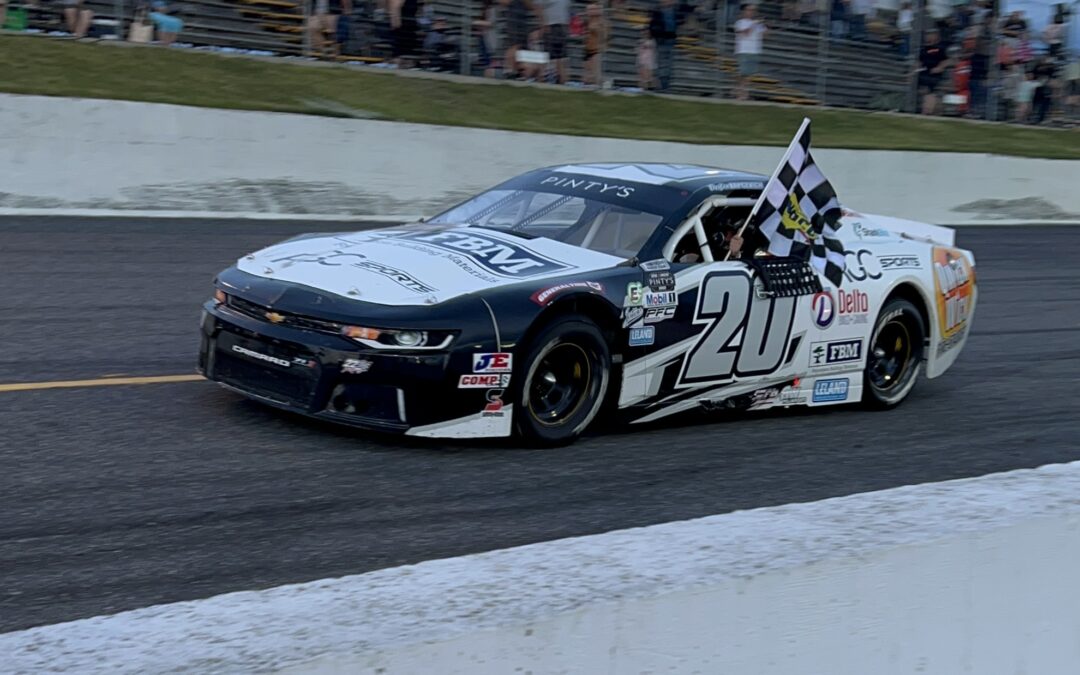 Innisfil, ON – Sunday, May 15, 2022 – It was an action-packed season opener for 22 Racing at Sunset Speedway with Treyten Lapcevich taking the win and Alex Tagliani finishing 7th. The highly anticipated NASCAR Pinty’s series season got underway yesterday with the NTN Ultimate Bearing Experience 250.

Both Alex Tagliani and Treyten Lapcevich established a good pace during the practice session with Lapcevich posting the fastest time in his No. 20 RGC / Qwick Wick / FBM Chevrolet Camaro at 14.853. Tagliani was 6th fastest at 14.962.

Although Tagliani had noticed something was amiss with his No. 18 Viagra / St Hubert Chevrolet Camaro Chevrolet during qualifying. He put his faith in his team to diagnose and resolve the issue, but this forced him to start the race at the back of the pack.

After the return of a long-awaited driver autograph session, the command to start the engines was given and the NTN Ultimate Bearing Experience 250 was finally underway.

Tagliani was working hard to get his car back up to the front, by the halfway point in the race he was already back in 8th position. Lapcevich had been battling at the front with some popular names in the NASCAR Pinty’s Series, and was in 3rd with 125 laps left.

There was a planned pit stop at 128 laps to allow teams to fill up on fuel and get four new tires.

After two cautions near the end of the race, Treyten still sat in 3rd behind Marc-Antoine Camirand and Raphael Lessard. With only 2 laps to go, Camirand and Lessard were battling for 1st and Treyten Lapcevich was able to sneak past both of them and take 1st place. Lessard was following very close, but in the end it was Lapcevich that took the win. Alex Tagliani had fought hard and pushed his way up from the back with a 7th place finish.

Lapcevich and his entire team were thrilled with the driver’s first win in the NASCAR Pinty’s series and are hoping for many more.

Next the team will be heading to the legendary Canadian Tire Motorsport Park on May 22, 2022.