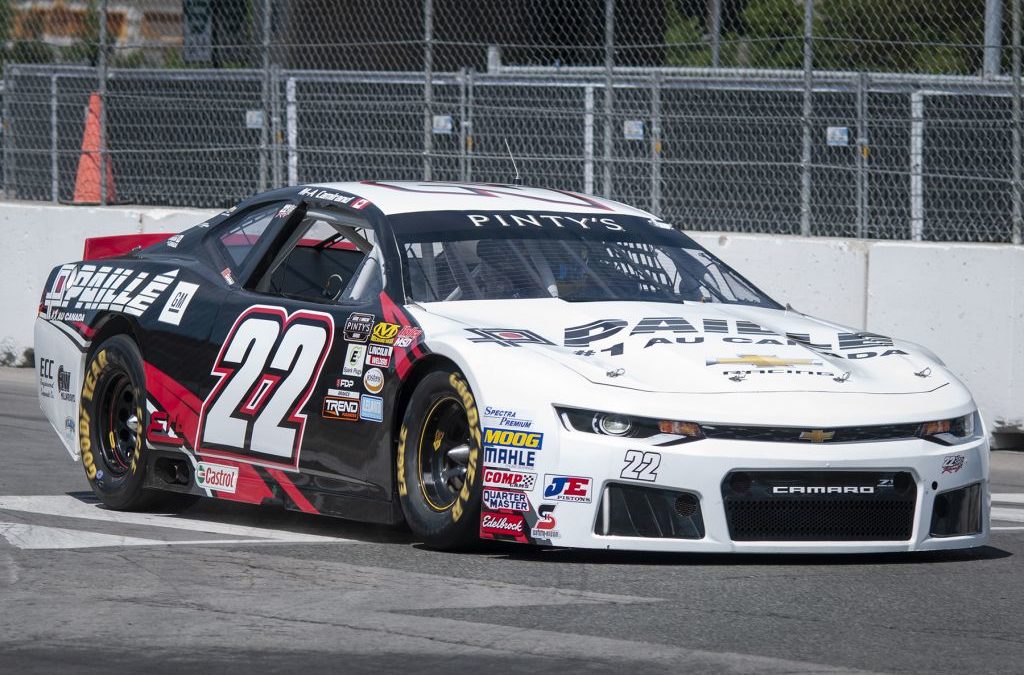 Toronto, ON, July 15, 2018 – Marc-Antoine Camirand couldn’t secure the podium finish he was hoping for, on Saturday, as the NASCAR Pinty’s series was on track as part of the Toronto Indy weekend. The driver of the GM Paillé no22 car scored a 6th-place finish that might be very profitable for the race to the championship.

Camirand has been fast all weekend and he was confident he could achieve a great result on the streets of Toronto. Third in practice and second after qualifying, the driver from Saint-Léonard-d’Aston was aiming at the top step of the podium, a year after he came close to victory lane.

His endeavour would become more difficult to achieve after an incident at the start. Although Camirand took the green flag from the outside of the front row, he was squeezed against the wall by another competitor.

“My left front wheel hit the wall and the direction of the car was damaged. From that point, the car was understeering badly. I dropped to the 6th spot, and I tried to gain these positions back, without success,” told the driver of the GM Paillé No. 22 Chevrolet Camaro.

While he has been tailing his competitor for most of the race, Camirand was unable to climb back to the top five. “I know that this street course can be treacherous, and I have been patient. The opportunity to pass finally never came up,” he stated.

After an eventful end of race that was forced to NASCAR overtime, the driver of the GM Paillé No. 22 Chevrolet Camaro secured a 6th-place finish. “Overall, this result is still good for the championship. We are heading West in a good position in the standings,” said Marc-Antoine Camirand, who sits 3rd in the drivers’ championship, only 9 points from the top 2 on the leaderboard.

Marc-Antoine Camirand and the GM Paillé No. 22 car will be back in action as the NASCAR Pinty’s series heads West for twin races at the Wyant Group Raceway, in Saskatoon, SK., on Wednesday, July 25.