Camirand in the top-10 in Antigonish 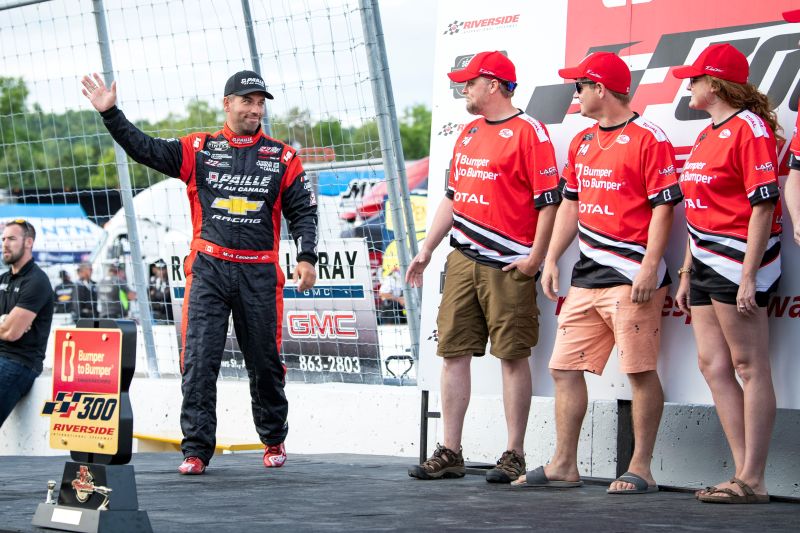 Trois-Rivières, August 19, 2019 — Marc-Antoine Camirand earned a top-10 finish, as he was at the wheel of his GM Paillé n°22 Chevrolet Camaro in the NASCAR Pinty’s series at Riverside International Speedway, in Antigonish, NS.

Camirand could not get as much track time as he would have liked to during practice session, on Saturday morning. As his car suffered from brake problems, he has been able to complete about only 10 laps in the whole session.

“We didn’t have time to figure out the right settings for qualifying. 22 Racing team set up my car like they did with my teammate Donald Theetge’s car, but we don’t have the same driving style. As mechanical problems prevented me from having enough track time, we had to start from somewhere, and Donald got quick practice times, but it wasn’t good for me in the race,” stated the driver from Saint-Léonard-d’Aston.

Hard luck did pursue Camirand during the race, as he suffered a flat tire just before the mid-race break. “Because of the flat tire, I couldn’t avoid and I spun the driver in front of me. I had to go back to the pits, and I lost two laps,” he explained.

At this point, Camirand and 22 Racing team tried various settings on the GM Paillé n°22 Chevrolet Camaro. “We were fast for a few laps, but then the car started to be too loose again. We really have to figure out a way to be fast on the long run for the end of the season on oval tracks,” he said.

Camirand earns a 10th-place finish, but this top-10 is not what he was hoping for. “We are returning on a course which has left AND right turns, next week, at the Canadian Tire Motorsport Park. I’m looking forward to it, and again, I’m hoping for this season of misfortune to end,” he concluded.

Marc-Antoine Camirand and the GM Paillé n°22 Chevrolet Camaro will be in action in Bowmanville, ON, next weekend as the NASCAR Pinty’s series resumes at the Canadian Tire Motorsport Park, as part of the Silverado 250 weekend in the NASCAR Gander Outdoors Trucks Series.