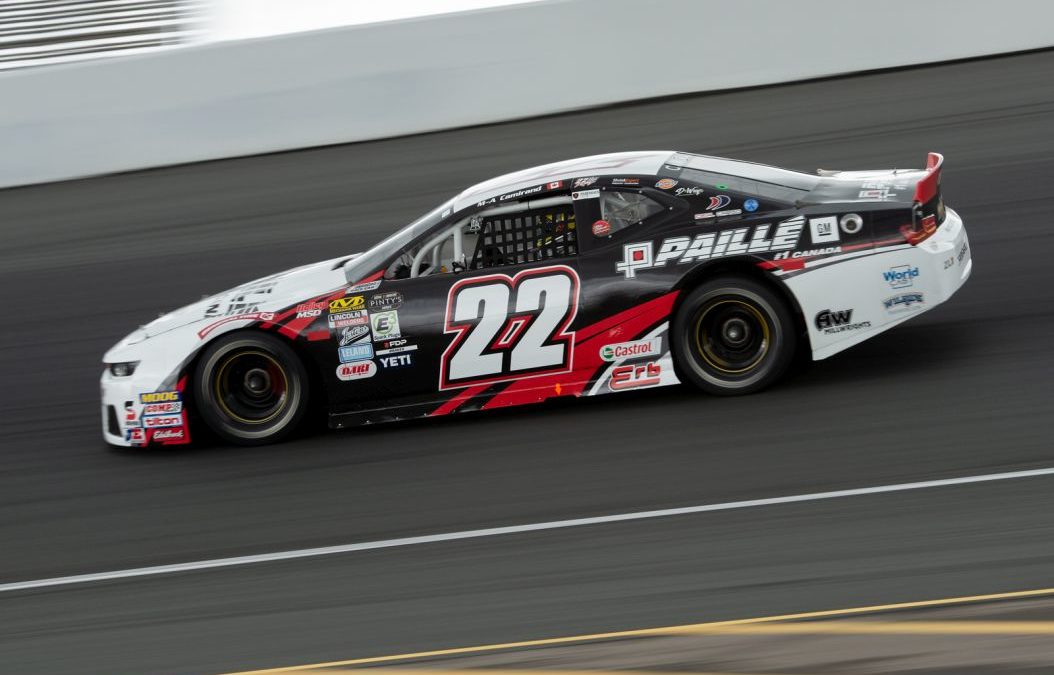 Hagersville, ON, September 29, 2019 — Marc-Antoine Camirand concluded his 2019 season with an 11th-place finish, Saturday night, at the Pinty’s Fall Brawl at Jukasa Motor Speedway. Camirand struggled with his GM Paillé n°22 Chevrolet Camaro, that was difficult to handle throughout the 200-lap race.

The driver from St-Léonard-d’Aston wanted to end his season strong at the fast 5/8-mile oval, located near Hamilton, ON. During practice session, his GM Paillé n°22 Chevrolet Camaro was fast and Camirand was able to post the 6th quickest time, less than a tenth of a second from first place.

“It was very close during practice. My car was a little tight and I couldn’t take the best line in turn one, but I was confident that we could improve it during the day”, stated Camirand.

After qualifying was rained out, the field was set according to practice times. Starting outside the third row, he was hoping to make his way to the top-five quickly.

While he fought hard in a tight pack to stay in the top-10 during the first half of the race, he was struggling with understeering problems. As his GM Paillé n°22 Camaro was in 10th place at the mid-race break, 22 Racing team made some adjustments to try to improve the car’s handling.

“When I went back on track, understeering had gotten worse. It was very difficult to keep the right line. Moreover, I have been unlucky during restarts, as I got stuck behind a car that I was not able to pass”, explained Camirand.

At the end of the race, he fought hard to climb back to the top-ten, but finally scored a 11th place finish at the wheel of the GM Paillé n°22 Chevrolet Camaro.

“I worked very hard and never gave up. I would have liked to give a top-ten to my team and my sponsor GM Paillé, but I did everything I could. This has been a difficult season, but I am confident we will come back strong next year”, he concluded.

Marc-Antoine Camirand takes the 7th place in the final drivers’ standings of the NASCAR Pinty’s series.