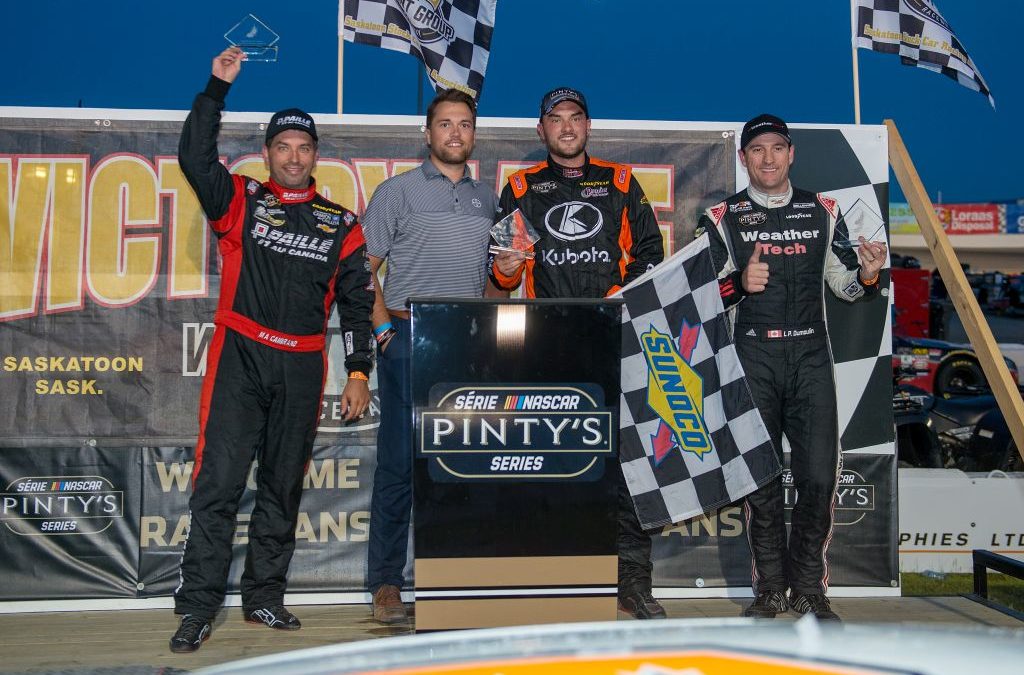 Saskatoon, SK, July 27, 2018 – Marc-Antoine Camirand posted two strong results, as he was on track at the Wyant Group Raceway in Saskatoon, as the NASCAR Pinty’s series was in action for twin 125-lap races. The driver of the GM Paillé n°22 Chevrolet Camaro made his way to the top five in the first race, closing a 4th place finish, and carried on his success to the second run, scoring a podium finish.

Camirand and 22 Racing team worked hard all day to find some speed to the GM Paillé N°22 Chevrolet Camaro. In 10th place on the starting grid for the first race, the driver from Saint-Léonard-d’Aston fought hard to make his way through the field. After thigh battles, he ended the race just one step away from a podium finish.

“The car got faster and faster over the day. I wasn’t quite satisfied after practice and qualifying, but my team did an impressive job to find some speed. I had just had a good race, and I was confident for the second run,” said Camirand.

The driver of the GM Paillé n°22 Camaro started in 5th place, after the second race’s starting gird was determined by the first twin-125’s fastest lap. “I haven’t been able to keep my place in the top five at the beginning, but my car got extremely fast at the end. During the last 20 laps, I closed up the gap with the leaders and I was all over their rearview mirrors. We finally secured a podium finish, and it’s looking good for the next race. I am very happy that we have shown that we can be very fast on oval tracks too, and I feel that my first win in the NASCAR Pinty’s series will come soon,” concluded Camirand.

Marc-Antoine Camirand and the GM Paillé n°22 Chevrolet Camaro will be back on track as soon as Saturday, when the Western Swing of the NASCAR Pinty’s series continues at Edmonton International Raceway, in Wetaskiwin, AB.