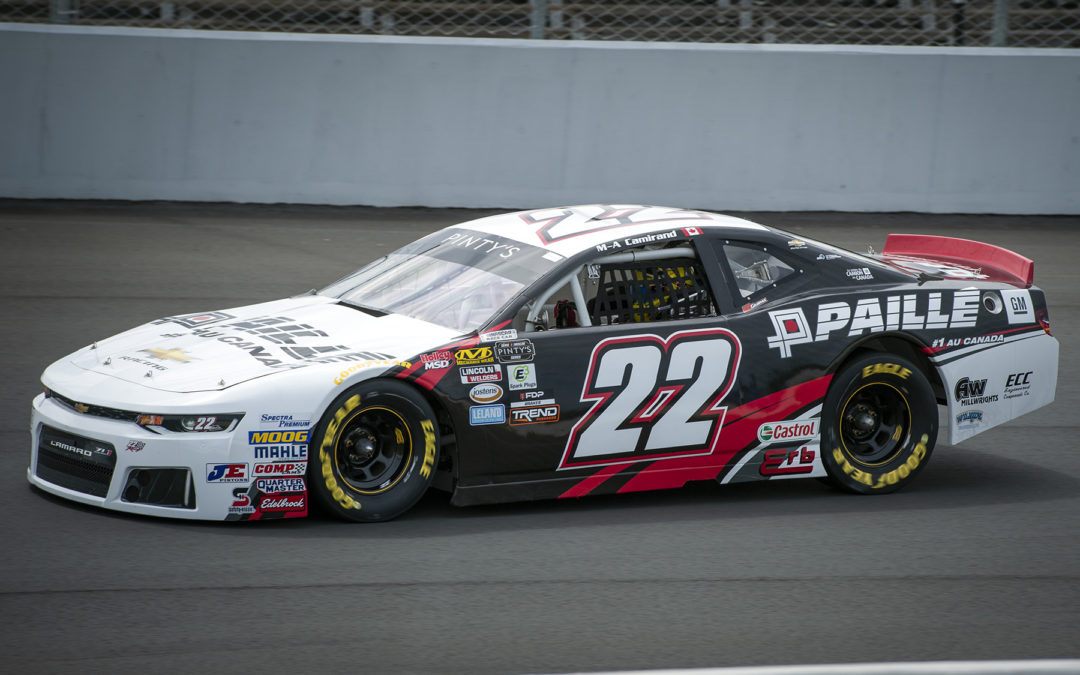 Hagersville, ON, June 17, 2018 — Marc-Antoine Camirand secured a fourth-place finish as he was back on track at Jukasa Motor Speedway for the first race on ovals this season in the NASCAR Pinty’s series. The driver of the GM Paillé n°22 Chevrolet Camaro pulled in a great result for his first oval race since 2015.

Camirand did not take long to be comfortable on the 5/8-mile oval, as he qualified in fifth place. “To race on a long oval track like Jukasa was new for me, and Scott (Steckly, 22 Racing team owner), gave me a word of advice to help me being fast right at the beginning. I scored my best qualifying result on an oval and I showed that I could be very fast during the race,” he told.

During the first laps, Camirand kept a good pace, but he had to concede a few spots after the car started to understeer. “Before the first stop, the handling got worse and I felt a vibration: I was afraid that a tire was damaged. I decided to take new tires during this first stop, but I had to start near the back of the field, because many other racers decided to stay on track for this non-mandatory stop,” added Camirand.

Although, his proved to be a good strategy, as the driver of the GM Paillé no22 Camaro quickly moved up to the front, as he was as fast as the leaders. He had come back the fourth spot before the second pit stop. When the race resumed, he preserved a top-five finish as the car stated to understeer again.

“I was fast, but I would have needed to be a little aggressive to take the third spot, and I had another racer behind me all over my mirrors. We decided to secure championships points instead of taking unnecessary risks”, Camirand stated.

Camirand finally took the fourth spot after an overtime finish. “I learned a lot today (Saturday) and I think that this looks good for other oval races. I showed that I could be quick, and I look forward to the next race,” he concluded.

Marc-Antoine Camirand and the GM Paillé no22 Chevrolet Camaro will be back on track on June 30th, as the NASCAR Pinty’s series takes on the short high-banked oval of Autodrome Chaudière, in Vallée-Jonction, QC.