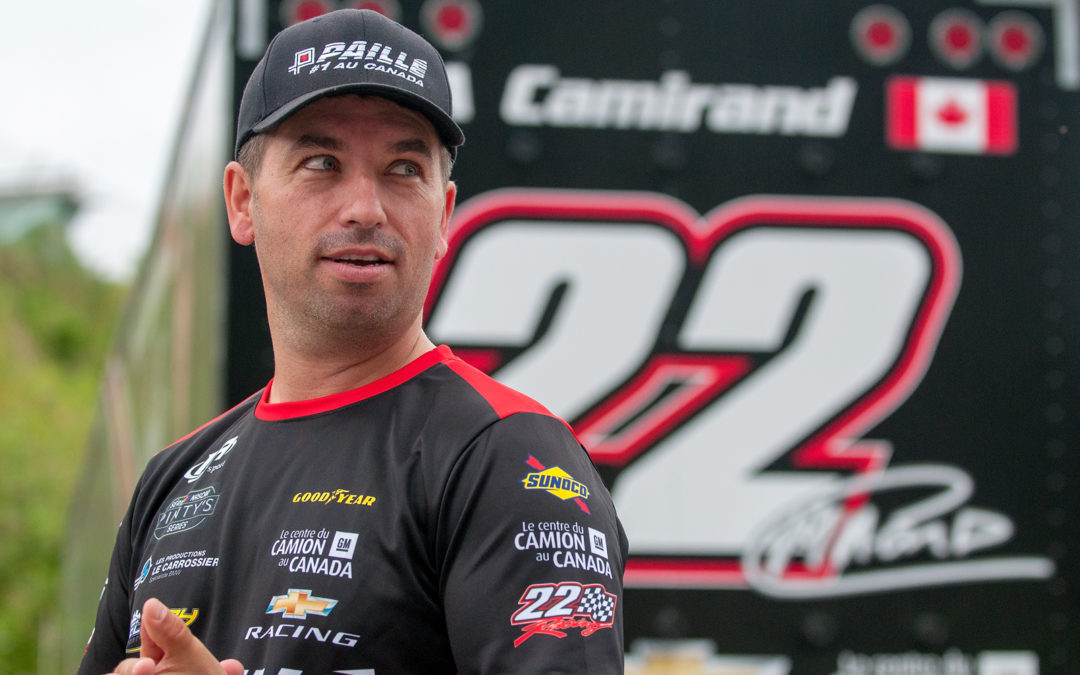 Vallée-Jonction, QC, July 1, 2018 – Marc-Antoine Camirand scored a sixth-place finish for the third race of the 2018 NASCAR Pinty’s series, on Saturday night at Autodrome Chaudiere in Vallée-Jonction, QC. The driver of the GM Paillé no22 Chevrolet Camaro was hoping for a strong finish, but his hopes were cut short when the race was rained out with 80 laps to go.

“It feels like I’m not quite satisfied… The first half of the race had been difficult, but I had a good pace after the mandatory pit stop. It seems like we could have had a strong finish with the GM Paillé no22 Chevrolet Camaro. Unfortunately, the race was rained out after 220 laps, when the best was yet to come,” said Camirand.

The 39-year-old driver from Saint-Léonard-d’Aston had been fast all day. He set up the pace in practice, as he was the fastest on the track. For qualifying, Camirand knew that the car wouldn’t be the best for two qualifying laps, but still managed to capture the sixth spot on the starting grid. “Before qualifying, 22 Racing team prepared a car that we knew would be good for the race, but we were aware that it was not optimal for qualifying,” he explained.

During the first half of the race, the driver of the GM Paillé no22 Chevrolet Camaro had to deal with oversteering, while he tried to keep his place to be in great position for the second half. After 22 Racing team made some adjustments during the mandatory pit stop, Camirand was confident he could gain some spots and hope for a podium finish.

“I had just had a good restart, I was running in sixth place and the car was getting better. Just before the race was stopped because of the rain, I knew I could chase the leaders. I would have taken these 80 laps… It’s a little disappointing, but this sixth-place finish is still good for championship points,” told Camirand, after the rain shortened the Bumper-to-Bumper 300.

Marc-Antoine Camirand and the GM Paillé no22 Chevrolet Camaro will be back on track on July 14th, as the NASCAR Pinty’s series resumes in the streets of Toronto for the Pinty’s Grand Prix of Toronto, during the Honda Indy weekend.