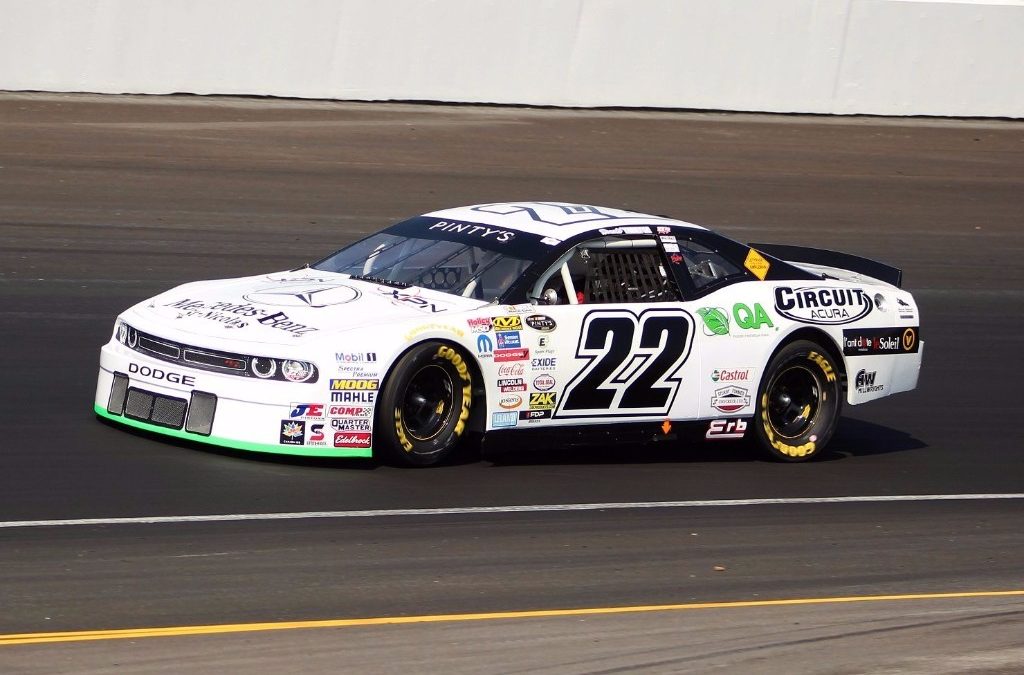 When practice was complete, Donald Theetge in the #22 Mercedes-Benz St Nicholas/Circuit Acura Dodge and the #18 EpiPen/Lowes/St Hubert’s Dodge of Alex Tagliani both reported that the cars were very drivable and they only wanted minor changes.

Next up was qualifying and when the twenty cars in attendance had completed their timed sessions, Theetge was scored 3rd quickest with Tagliani being posted in 5th.

The Pinty’s Fall Brawl 200 lap event would start under the new lighting system at the speedway and the drivers and crews were incredibly impressed.  It was like running the race during the daytime.

Theetge was immediately on the hunt for 2nd place and then by lap 19 he had taken over the lead from pole sitter Kennington.  Tagliani would also be on the move forward and on lap 35 moved into second place behind his teammate.  A caution on lap 42 had both drivers heading to pit road for enough Sunoco fuel to get them to the finish. By lap 62 Theetge was back in the lead where he stayed until the next caution.  During that break Theetge came to pit road twice – first for right side tires then back again for left side.  Tagliani would pit but only for right side rubber under this caution. Several laps later the caution flew again and Tagliani would pit for his left side tires and an adjustment giving him much fresher tires than most of the other competitors. They felt their strategy was strong and the #18 quickly began to pick off the cars in front of him until lap 138 when contact with another competitor resulted in some front-end damage to the car. It was a handful for the remaining 62 laps but Tagliani battled hard for a 6thplace finish.  Meanwhile Theetge was continuing to lead the race until the final turn of the final lap when the #76 of Lapcevich used a bump and run move to push Theetge out of the way resulting in a 2nd place finish for the disappointed #22 driver.

“I don’t like that kind of racing,” said Theetge after the race.  “I have raced and won in ACT and other series and we were never allowed to make that move. You had to pass on the inside or the outside – not push another competitor out of the way.  But I can’t thank Scott (Steckly) and his 22 Racing team enough.  We had a fantastic car and we led the most laps today and every race this year we have been competitive.  If he will do it I would really like to race for them again next year.”

“I had a good car right from the start of the race – even running 2nd to my teammate Theetge at the start,” said Tagliani.  During the second caution, I made a pit stop for tires giving us fresher rubber than most other drivers.  But while moving up through the field, I had contact with another car and bent the front suspension.  A sixth-place finish while battling handling problems is quite an achievement.  Tonight, the credit again goes to the team.  They gave me a very competitive car again tonight.”

Tagliani would finish the season in 6th in the drivers standings and tied for 7thwith his 22 Racing teammates for 7th in the owner standings.