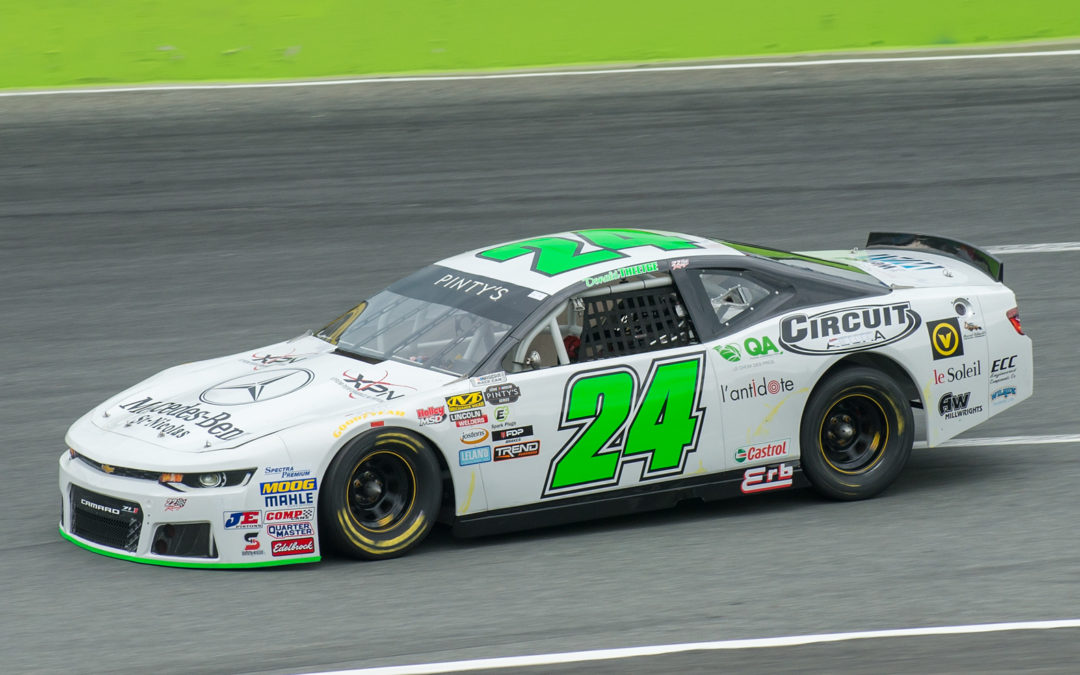 Sunday July 1, 2018:  Donald Theetge arrived at Autodrome Chaudiere with one thing on his mind and that was to win or at least be on the podium. The Bumper to Bumper 300 was the third event on the NASCAR Pinty’s Series schedule and one Theetge looked forward to.

Theetge driver of the #24 Mercedes-Benz St Nicolas/Circuit Acura Camaro was quick right from the start of practice and posted a time that was second quickest.  He followed that up with the fourth best time in qualifying lining him up in the second row on the outside.

After a light rain shower and great work by the track services people to get the track dry, the green flag flew for the 300 lap event.  Theetge initially dropped back a couple of positions trying to get to the low groove.  Once he got in line he began to move back toward the front.  At the mid way point of the race, the caution waved for the planned competition caution and Theetge and the rest of the competitors brought their cars to the attention of their pit crews.  With tires, fuel and an adjustment, Theetge went back to work.  Unfortunately for the large crowd on hand rain started to fall at lap 221 and the race had to be terminated. But with two late race cautions they got to see some great door to door action. Theetge was able to take over the third position and notch his first podium of the season.

“My car really started to work good after the break and I wish we could have raced all 300 laps,” said Theetge.  “But 22 Racing gave me a competitive car again today and it was great to run up front and get on the podium. I can’t thank my crew enough for all their hard work again today.”

The Bumper to Bumper 300 from Autodrome Chaudiere will air on Sunday July 8th at 1 p.m. on TSN2.

Next on the schedule for Donald Theetge and the Mercedes-Benz St Nicolas/Circuit Acura team will be the Pinty’s Grand Prix of Toronto at Exhibition Place.  This will be his first appearance on the streets of Toronto.