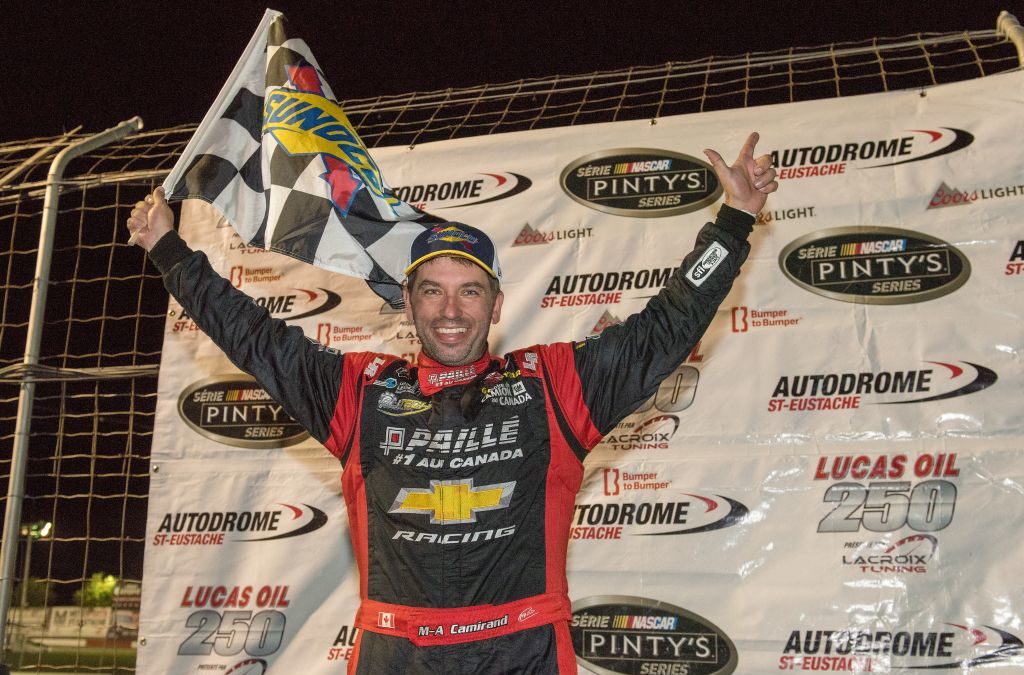 St-Eustache, QC, September 9, 2018 – Marc-Antoine Camirand scored his first career win in the NASCAR Pinty’s series, on Saturday night, as the driver from Saint-Léonard-d’Aston claimed the victory in the Lucas Oil 250 at Autodrome St-Eustache.

Camirand drove his GM Paillé n°22 Chevrolet Camaro to the front of the field and took the lead on lap 239 to capture the checkered flag after an eventful race.

“I had been waiting for this for a very long time. It feels so great to finally cement that win. Moreover, to get that first win on an oval track, when people say that I’m a road-course ace, it gives something even more special to that first victory,” said Camirand.

The 39-year-old driver was expecting to fight hard for this 250-lap race, on a tight 0.4-mile flat oval. He did just that. “As we expected, it wasn’t an easy race, but I think that I managed to stay out of trouble. I had a good qualifying run, I started the race in second place, and I stayed in the front pack. I think that all my friends and fans there saw a very good show,” Camirand stated.

Camirand’s GM Paillé n°22 Chevrolet Camaro was very fast. The driver led 97 laps during the first half of the Lucas Oil 250, and then took the lead just before a late-race crash that forced a NASCAR overtime.

“I have been lucky to start from the inside lane for the last restarts. When the last yellow came out, I had just taken the lead. I was confident that I could keep the first place after the NASCAR overtime, as I knew that I had a very good car,” he explained.

“I couldn’t be more grateful towards my sponsor GM Paillé and 22 Racing team, who made it all possible. I am proud to work with them, and I’ll work very hard to give them other great successes for the last races this season,” Camirand concluded.

Marc-Antoine Camirand and the GM Paillé n°22 Chevrolet Camaro will be back in action on the New Hampshire Motor Speedway mile on September 22nd, for the NASCAR Pinty’s series’ first race in the US, in Loudon, NH.