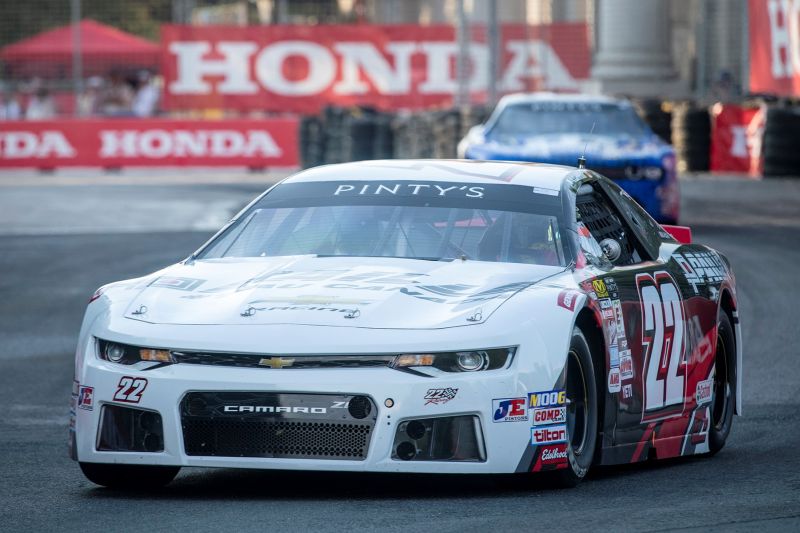 Toronto, ON, July 14, 2019—Marc-Antoine Camirand was hoping to come back strong to the streets of Toronto, on Saturday, during the Pinty’s Grand Prix of Toronto. Camirand turned out to be a serious contender for the victory until late in the race, but with two laps to go, he crashed his n°22 GM Paillé Chevrolet Camaro in the tire wall.

After he scored the second-quickest time in practice, Camirand qualified second and knew he could achieve a first podium finish in 2019, after a difficult start in the 2019 NASCAR Pinty’s season.

“We have been so fast all weekend. I know I can be quick here and I like racing here. It felt like I could achieve great results this weekend,” stated the driver of the n°22 GM Paillé Chevrolet Camaro.

Early in the race, he has been able to follow a fast pace and kept is second place, despite fierce competitors and intense restarts. “The first restart has been challenging. I dropped a few positions, but I focused to climb back to second place. My n°22 GM Paillé Chevrolet Camaro was so quick that I gained three spots back before the second yellow flag. We were very fast, but it didn’t turn out like I was expecting it,” explained the driver from St-Leonard-d’Aston, QC.

At the second-to-last restart in the 35-lap race, he has been able to have a good start and exit turn one in front of his 22 Racing teammate Alex Tagliani. He was heading to a first victory this season, his second in his NASCAR Pinty’s career. Unfortunately, after he built a small gap ahead of his teammate, he came too fast in turn 8 and hit the tire barrier, forcing a last full course yellow and a NASCAR Overtime.

“We were so close to victory, but I made a mistake. I braked too late and it cost us a probable checkered flag. I feel so sorry for my team, my sponsors and my supporters, but now it’s time to look forward and bounce back during our trip West,” he concluded.

Marc-Antoine Camirand and the n°22 GM Paillé Chevrolet Camaro will be back on track as the NASCAR Pinty’s series heads to its annual Western Swing and resumes on July 24th for the Velocity Prairie Thunder Twin 125s at Wyant Group Raceway, in Saskatoon, SK.