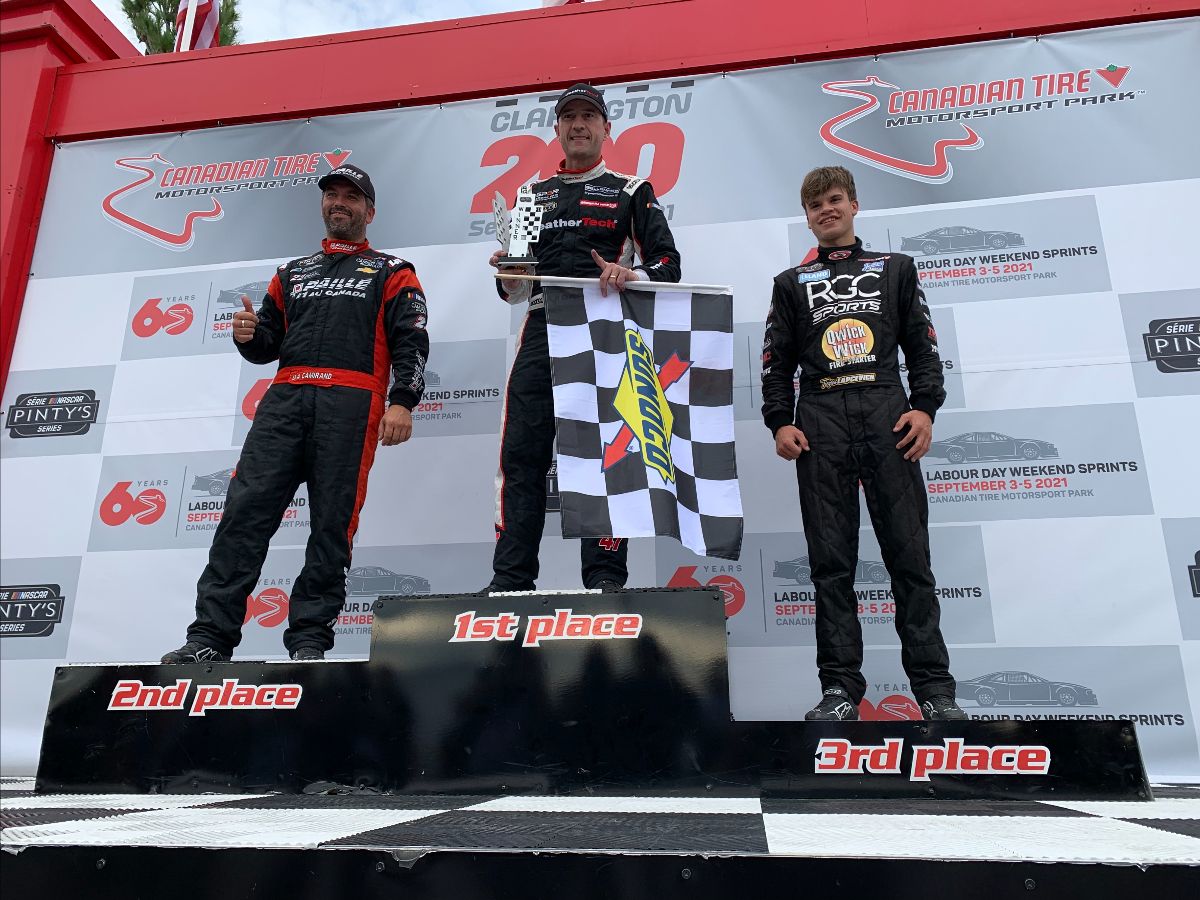 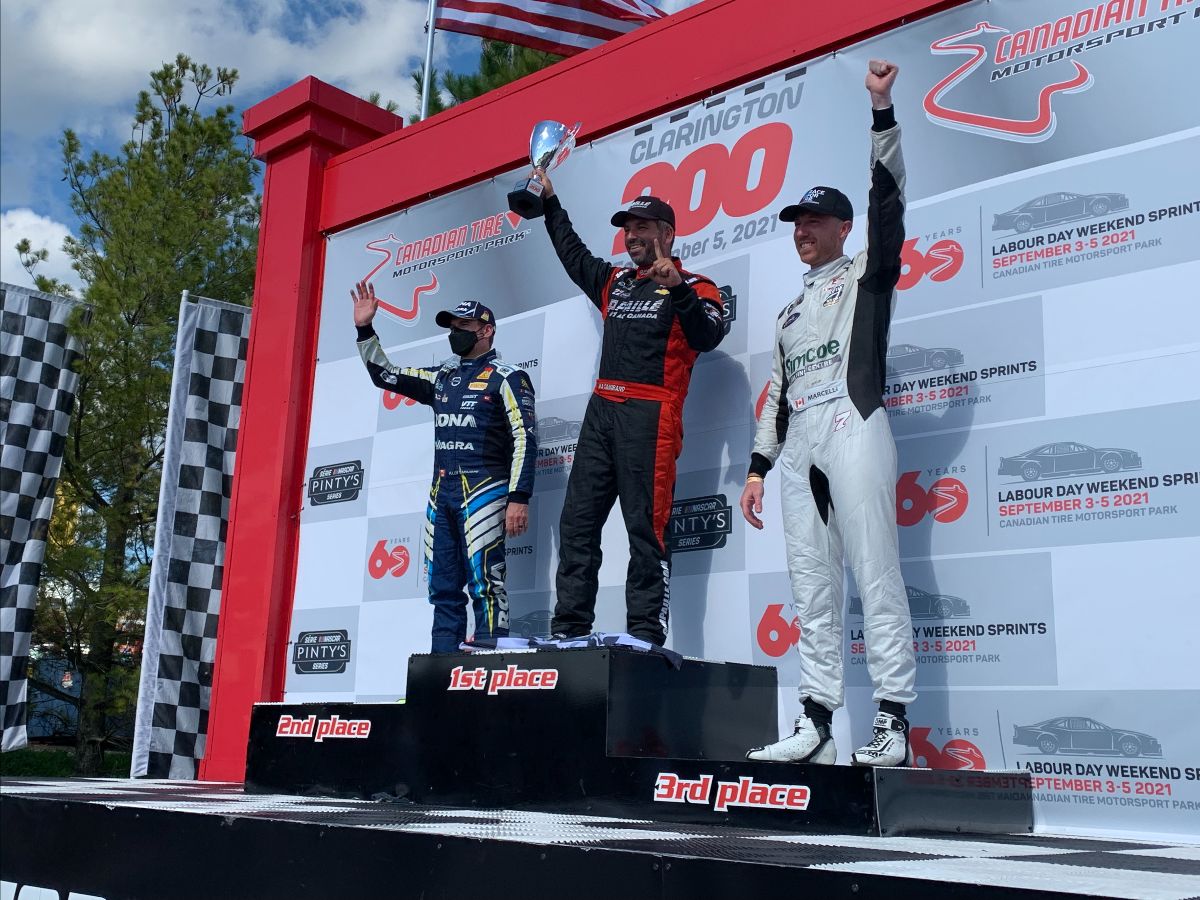 Milverton, ON, CANADA – Tuesday September 7, 2021 – The much-awaited return to CTMP on its 60th Anniversary saw 22 Racing achieve two double-podium finishes. This outstanding accomplishment was highlighted by the long sought-after win of the 22 car on a road course by Marc-Antoine Camirand following a second place finish the previous day. Camirand shared the podium with Rookie Treyten Lapcevich in his CTMP debut who finished third.  After leading the most laps on Sunday, Alex Tagliani took 2nd place regaining the Series’ championship points lead.

After a soggy start to the 2021 season all three drivers and crews were delighted to see the sun ahead of Saturday’s practice session for the Olymel Grand Prix of Ontario.  Camirand and Lapcevich were third and fourth fastest of the session respectively with Tagliani ninth fastest overall.

Lapcevich seemed to enjoy the rollercoaster ride that CTMP is often described as. Unable to hide his excitement after practice, the teen from Grimsby, Ontario commented: “I’ve put in 400 laps at CTMP on a simulator but that was the fastest I’ve ever entered a corner in any car.”

Tagliani jumped to the top of the leaderboard behind the wheel of his No 18 Rona / Viagra / St Hubert Chevrolet Camaro early in the official NASCAR Pinty’s Series qualifying session.  Tagliani would eventually secure fifth fastest followed by Camirand in sixth and Lapcevich in eighth putting all three teammates in the top-10 of the Olymel Grand Prix of Ontario starting line up.

With the Olymel Grand Prix of Ontario being a 30-lap sprint there was little time for the trio of 22 Racing drivers to waste, with each driver methodically taking advantage of every opportunity. With five laps to go Camirand charged hard to grab the lead with road-course rookie Lapcevich studying the leaders’ every move from his third-place vantage point in his No 20 RGC / Qwick Wick Camaro after passing Tagliani on the restart.

After a challenging start to the 2021 season Camirand would finish second for the third time in his 11-race career at CTMP, followed by Lapcevich making his CTMP debut on the podium in 3rd.  Tagliani crossed the line in 4th after suspension debris from another car cracked his car’s windshield and perforated the roof of the No 18 machine. Although a little rattled by this Tagliani was uninjured by the debris.

A double podium as part of a solid top-five finish for all three cars in the Olymel Grand Prix of Ontario was a welcome result for the first race of the doubleheader weekend.

The morning skies at the legendary “Mosport” 2.459-mile paved road course looked less inviting than the day before however, the sun began to shine just in time for the official NASCAR Pinty’s Series qualifying session. Lapcevich claimed 5th fastest of the session followed by Camirand and Tagliani 6th and 7th fastest respectively ahead of the Clarington 200 feature race.

The 51-lap Clarington 200 feature got underway, yet with only a few laps in Lapcevich’s No. 20 car suffered mechanical issues that triggered a flurry of action on pit road. Moments later Camirand and Tagliani also entered the pits but for a quick splash-and-go.

As Camirand and Tagliani continued their march forward through the field their crew chiefs opted for different tire strategies. Tagliani would stay out and Camirand came in for a new set of General Tires.

With Tagliani securely in the lead it had appeared that the No 18 team may have made the correct call on tire strategy however, Camirand, equally as hungry for the win began to close the gap.

With 5 laps to go, Tagliani closed in on a back-marker presenting an opportunity for Camirand to make the pass on his teammate for the lead.

Camirand, pilot of the No. 22 GM Paille Chevrolet Camaro would not only earn his first victory of the 2021 NASCAR Pinty’s Series season, but also his second win since he began competing in Canada’s premier series. This win has special significance for the 22 Racing team as this is the first time the No. 22 car, first driven by team owner Scott Steckly and now by Camirand, has ever won a road-course race. The pursuit of this long sought-after achievement has been in the making for almost a decade and a half.

“Crew chief Randy Steckly called me into the pits on lap eight for refueling and again around the hallway point of the race. This strategy put us in good position to fight for the win.”  said Camirand. “That last lap felt extra-long but worth it for the twenty-two team and GM Paille.” added the elated driver from St. Leonard d’Aston, Quebec.

Although Tagliani was unable to repeat his top-of-the-podium success from 2018 at CTMP, he led 27 laps of the race and secured 2nd spot on the podium for his fifth top-five of the season. His result allowed him to regain the NASCAR Pinty’s Series championship points lead heading into Flamboro Speedway this coming weekend.

“A fourth place on Saturday and a second today (Sunday) is not a bad weekend of racing as it put us back in the points lead.”  said Tagliani. “In hindsight we may made some different choices, but the No 18 team did a great job this weekend and overall this was a strong weekend for the 22 Racing team”

Lapcevich’s day didn’t go as planned on Sunday, but with the never-quit-attitude of the No 20 crew he was able to nurse his car across the finish line to salvage points. His podium finish on Saturday at a track he has never raced at or tested on, has proven without a doubt that he’s as versatile and skilled as any driver in the series.

This past weekend resulted in many milestones and has now positioned all three drivers in the top-10 in the point standings with Alex leading with 248, Lapcevich in 4th with 209 and Camirand climbing to 6th with 205 points. Lapcevich continues to lead the Jostens Rookie of the Year standings and 22 Racing founder Scott Steckly continues to stay atop the 2021 NASCAR Pinty’s Series Owner Standings.

The NASCAR Pinty’s Series heads to Flamboro Speedway for the seventh and eighth races of the 2021 season on Sunday, September 12, 2021 – The Motomaster Batteries 125 and QwickWick 125. Visit NASCAR.ca for details and times..