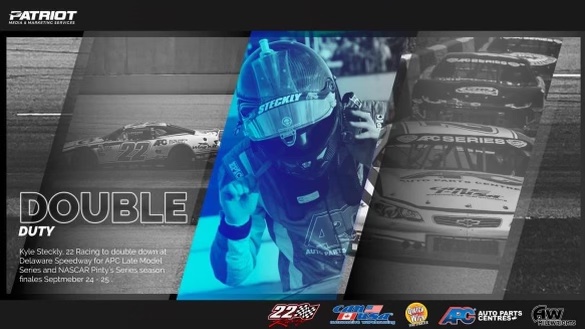 Kyle Steckly may only be 17 years of age, but he’s emerged as one of Canada’s top prospects in 2022, making his debut in the NASCAR Pinty’s Series with his family owned outfit, 22 Racing, in addition to competing full time with both the APC Late Model Series and in the weekly Pro Late Model division at Delaware Speedway.

Kyle brought home four wins in eleven starts during his 2022 campaign at Delaware in the Pro Late Models, coming up just 20 points shy of the season championship. However, he finished out the season with a clean sweep on the final night of racing, dominating the field in his No. 22 APC Auto Parts Centres/Qwick Wick Fire Starters Camaro.

Heading into the season finale Saturday at Delaware, the Castrol Great Canadian 100, Steckly sits just 20 points behind championship leader J.R. Fitzpatrick after a tumultuous ending to the APC Series 100 at Sauble Speedway, which saw him sent to the back for involvement in a caution late in the race. While able to rally back through the field for an 11th place finish, Kyle will be forced to drive on the offensive, in almost a must win situation to have a shot at the season title.

Regardless of the outcome, one thing remains certain for Kyle after Saturday night’s racing program; he will be back behind the wheel of the 22 Racing No. 22 Camaro in the NASCAR Pinty’s Series for their 250-lap season finale. Making his debut at Sutherland Automotive Speedway in the Leland Industries Twin 125s back in July, Steckly scored 4th and 12th place finishes, putting the Pinty’s garage on notice. He looks to better his best finish on Sunday as he gets more comfortable with the heavy, high horsepower racecars in the Pinty’s Series

You can watch Kyle in the No. 22 car live on Saturday night on GForceTV, at 5:30 PM EST for qualifying, with the green flag set to fly at 7:00 PM EST. On Sunday, tune in to TSN.ca, the TSN app, or FloRacing at 4:30 PM EST to catch the final NASCAR Pinty’s Series race of 2022. Tickets to watch in person can be purchased at DelawareSpeedway.com.