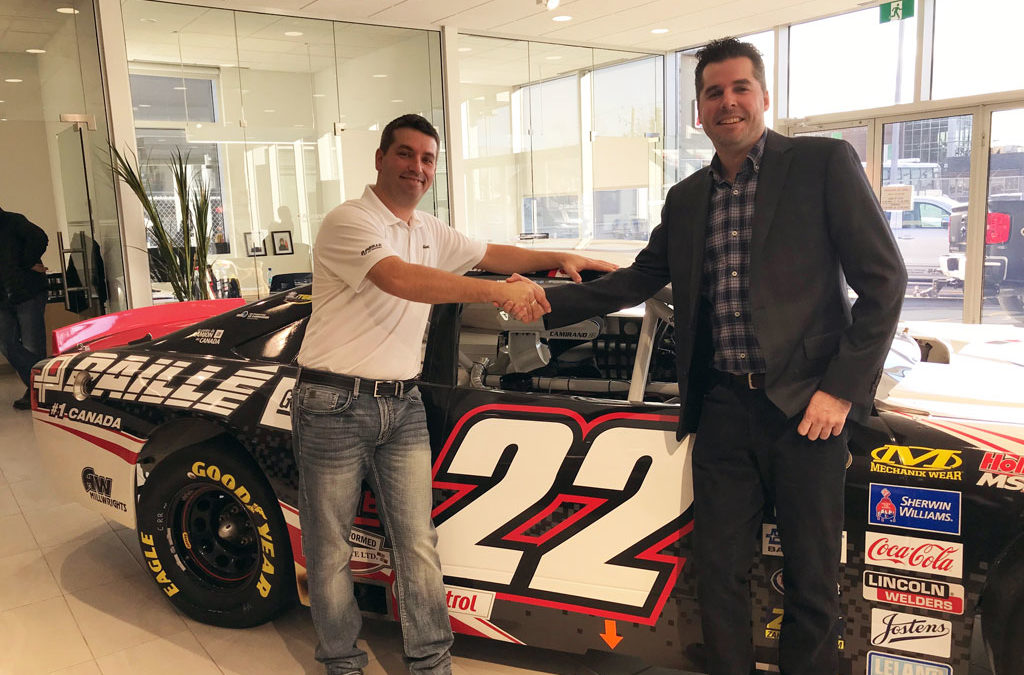 Berthierville, December 6, 2017 – Marc-Antoine Camirand will run full time in the NASCAR Pinty’s series in 2018 thanks to his renewed partnership agreement with GM Paillé, #1 au Canada of Berthierville, QC.

The driver from Saint-Léonard-d’Aston will team up again with quadruple champion Scott Steckly’s 22 Racing team to try to be crowned champion in Canada’s highest stock-car series.

“I couldn’t have imagined a better partner than GM Paillé. It’s every driver’s dream to have a drive with a top-tier team confirmed for a full season, many months before the first race. It sure will help me to be ready physically and mentally,” said Camirand.

Camirand and GM Paillé will run full time in the NASCAR Pinty’s series with one single goal: to win the championship of the series featuring 13 races in five Canadian provinces and one American state. The driver’s achievements during his four appearances in 2017 are promising. In order to capitalize on this potential, 22 Racing team will run not less than 10 test days before the season opener.

“I was not far off from getting my first win in this series twice last year with two podium finishes. We did some great things together in 2017 and I’m primed to fight for a first win and the championship. I feel I still have to gain some experience on oval tracks even if I had my part of success on these in 2015,” said Camirand, who has five podium-finishes in 23 career starts, including two on ovals, in Antigonish, NS, and Saint-Eustache, QC.

GM Paillé’s team is proud to renew this highly exciting partnership with the driver who holds the record for most victories and podium finishes at the prestigious Grand Prix de Trois-Rivières.

“We were thrilled to follow Marc-Antoine last summer and we hope that these successes are just the beginning of an incredible story in 2018, said Jean-Claude Paillé, CEO of GM Paillé. We are proud to see our name and colors in the most prestigious stock-car series in Canada, and we want to team up again with passionate people and winners like Marc-Antoine Camirand and four-time NASCAR Pinty’s champion Scott Steckly’s 22 Racing team.”

NASCAR Pinty’s series 2018 schedule was unveiled last week and features four road course races, including the Grand Prix de Trois-Rivières (August 12), a race during the Toronto Indy weekend (July 14) and two stops at the Canadian Tire Motorsport Park, in Bowmanville, ON (May 20, August 26).

Marc-Antoine Camirand and the GM Paillé n°22 Chevrolet will also be on track for nine races on ovals, including the series’ first stop in the United States, on the Loudon’s New Hampshire Motor Speedway magic mile (September 22), as well as two more races in Quebec, at Autodrome Chaudiere (June 30) and Autodrome Saint-Eustache (September 8).