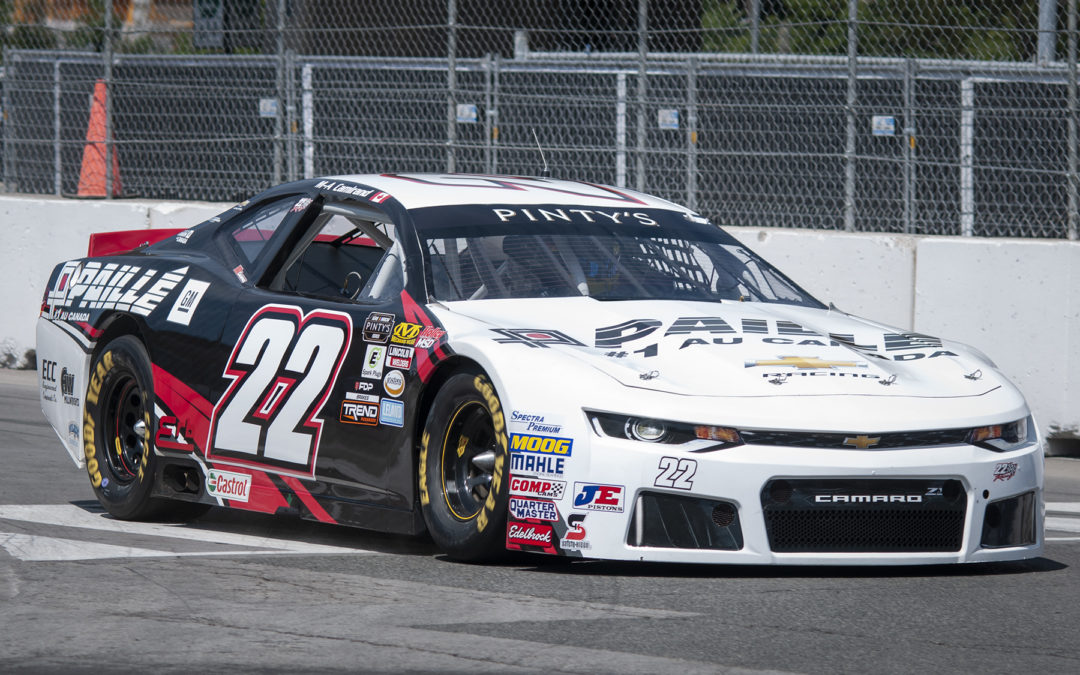 Berthierville, February 20, 2019 – Marc-Antoine Camirand returns full-time in 2019 in the NASCAR Pinty’s series, thanks to a renewed partnership with #1 GM dealer in Canada, GM Paillé. After a successful first full season with the dealership from Berthierville, QC, the driver of the GM Paillé n°22 Camaro aims at the top spot in the standings.

Camirand and Jean-Claude Paillé, CEO of GM Paillé, confirmed the renewal of the sponsorship agreement last weekend, as they were in Florida for the Daytona 500. The driver also confirmed he will be back at the wheel of the n°22 car of 22 Racing team, owned by four time series champion Scott Steckly, with whom he has been very successful for two years.

“I’m so happy to carry this winning association with GM Paillé. In motorsports, nothing is more valuable than a sponsor who shares our passion and who cheers on us always to go further. GM Paillé’s team is passionate and professional, and it’s an honor for me to wear its colors,” said Camirand.

The driver from Saint-Léonard d’Aston, QC, and the #1 GM dealer in Canada, continue an association that goes back to 2016, as Camirand raced at the Grand Prix de Trois-Rivières. Then, thanks to GM Paillé, Camirand competed in four NASCAR Pinty’s races in 2017, before engaging full time for 2018, when he finally won his first series’ victory.

“I got my first win last year at Autodrome St-Eustache, and through the season, I proved that I could be very fast, both on ovals and road courses. Now, the ultimate goal is to win the NASCAR Pinty’s championship, and I think that everything is in place to achieve it,” explained Camirand, who will have a new crew chief Warren Jones and two car chiefs with Brian MacDonald on oval tracks, and Yvan Turcotte on road course

Jean-Claude Paillé, CEO of GM Paillé, was also happy to announce the partnership renewal: “We have put in place a highly exciting association with Marc-Antoine, and we wish to continue this winning partnership with him and 22 Racing team. It’s also important for us to support local athletes to enable them to show their talent at a national level, such as Marc-Antoine in the NASCAR Pinty’s series.”

We are very excited to have Marc-Antoine and GM Paillé back with us for 2019. Marc has continued to improve each time on the track and is a threat to win on both road courses and ovals,” said team owner Scott Steckly. “We predict he will have even more wins and podiums in 2019.”

Marc-Antoine Camirand and the GM Paillé n°22 Chevrolet Camaro will be on track for the 13 races in the NASCAR Pinty’s series. It kicks off at the Canadian Tire Motorsport Park in Bowmanville, ON, on May 19th. The series will stop in five Canadian provinces and in New Hampshire, including races during the Toronto Indy weekend (July 13th) and the NASCAR Gander Outdoors truck series’ Silverado 250 event at CTMP (August 25th), as well as the renowned Grand Prix de Trois-Rivières (August 11th) and the Full Throttle Fall Weekend on the New Hampshire Motor Speedway mile (September 21st).