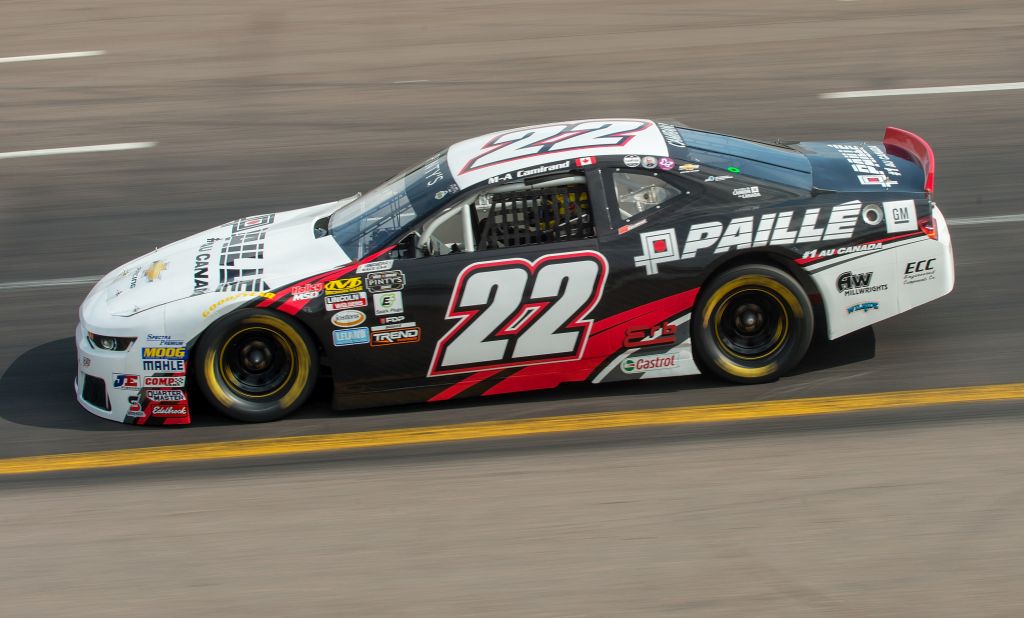 Antigonish, NS, August 19, 2018 –  Marc-Antoine Camirand was fast on Sunday, as he was on track at the Riverside International Speedway in Antigonish, NS, in the NASCAR Pinty’s Series. The driver of the GM Paillé N°22 Chevrolet Camaro unfortunately had a difficult end of race and suffered mechanical failure that forced him back to the pits.

The 300-lap race, scheduled on Saturday, was postponed to Sunday due to rain. Qualifying was canceled, and the grid was set according to championship points. Camirand took advantage of the situation, as he started outside the front row, in second place.

The driver of the GM Paillé N°22 Chevrolet Camaro had to concede a few spots early in the race, but came back strong after the two thirds of the Bumper to Bumper 300, as he led 43 laps before the second mandatory break.

“My car was becoming faster and faster, and I took the lead on lap 186. I was able to keep my position and I was not too hard on the car. I was hoping for another strong result,” told Camirand.

Unfortunately, when the car came back on track after the second pit stop, it was not as fast as it should have been.

“I don’t know what happened. I took new tires and we didn’t change the set up… When I got back on track, I had lost three tenths of a second on my lap time. Maybe there was something wrong with this new set of tires. We will never know … “ he said.

Camirand’s misfortune continued late in the race, as a broken rear-end forced him to the pit. “There was smoke behind my car, and NASCAR officials gave me the black flag. The rear-end was broken, and I didn’t make it out of the pits after that,” he explained.

These unfortunate events were costly in the championship standings, but Camirand stays in the race for the title, sitting fourth, only seven points behind second place.

“We’ll come back strong for sure. I do not give up. There are four races left, and I know anything can happen…”, he concluded.

The Bumper to Bumper 300 from Riverside International Speedway will air on TSN 2 on Saturday Aug. 25th at 1:30 p.m. ET and on RDS 2 on Tuesday September 11th.

Marc-Antoine Camirand and the GM Paillé n°22 Chevrolet Camaro will be back in action next weekend, as the NASCAR Pinty’s series heads to the Canadian Tire Motorsport Park, near Bowmanville, ON, as part of the Silverado 250 weekend in the NASCAR Camping World Truck Series.