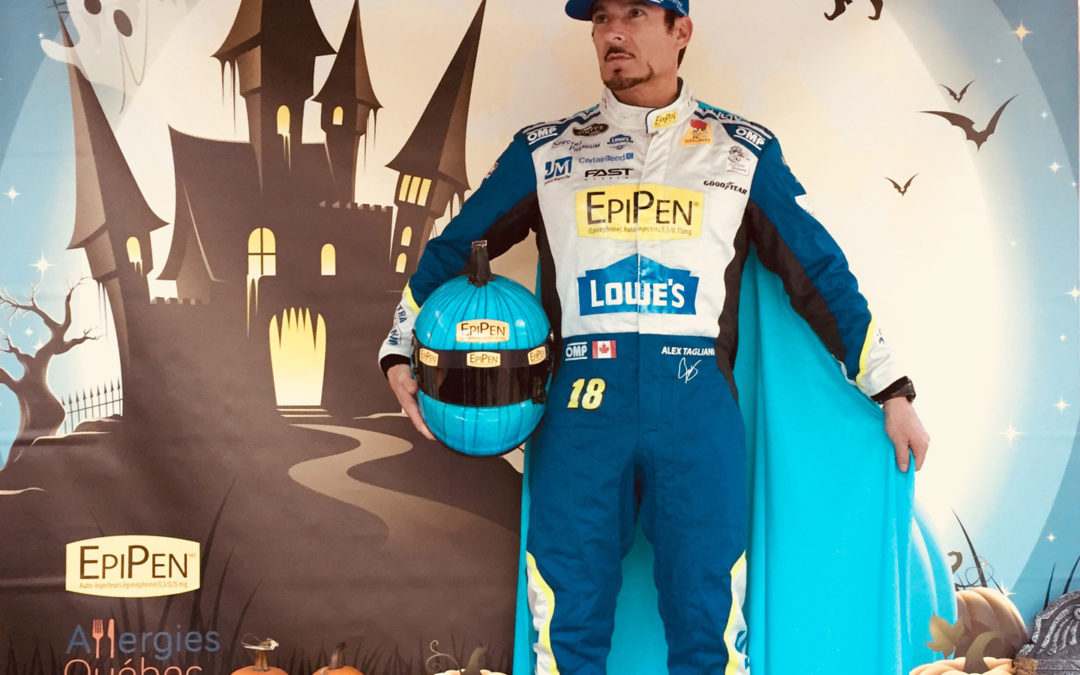 Alex Tagliani will drive his n° 18 racecar in the streets of the City of Bois-des-Filion to raise the public’s awareness for the #MyTealPumpkin project, an initiative to promote a safer Halloween for kids suffering from food allergies.

Montreal, October 23, 2017 – The Teal Pumpkin Project was launched in 2014 in the United States to raise awareness of food allergies and to promote a no tricks and all treats solution to a safer Halloween Night for kids at risk for anaphylaxis, or with a history of anaphylactic reaction by encouraging them to visit houses in their neighbourhood that display teal-coloured pumpkins on their doorstep or windowsills. Renowned racecar driver Alex Tagliani, who is affected with severe allergies to peanuts and nuts, has stepped forward this year with Allergies Quebec and the #MyTealPumpkin initiative to make Halloween safer for kids. More than 100,000 children in Quebec suffer from life-threatening food allergies.

“What we are doing here with the #MyTealPumpkin initiative is very important for children suffering from food allergies,” Alex Tagliani said. “Kids like to have fun with their friends and Halloween celebrations are for all children, but it needs to be done in a safe environment. We’re creating a new Halloween tradition with this initiative, but we need to spread the word to increase public awareness. Half the fun is to go trick or treating, the other half is to open the bag of treats and enjoy them. But parents with kids suffering with food allergies sometimes have to take away what was collected for the sake of their child. Carrying an epinephrine auto-injector, which treats all anaphylaxis, is a good safety measure during Halloween festivities. You never know when kids will pick something out of their bag of treats.”

Tagliani, a member of the Canadian Motorsport Hall of Fame, has embarked on a new crusade this October as he joins with Bois-des-Filion city officials for a parade with kids and for kids, early on Halloween evening. Activities include face painting offered by the City of Bois-des-Filion on October 31 from 3 pm to 5:30 pm at Chalet des citoyens located at 30, Montée Gagnon in Bois-des-Filion, Quebec J6Z 2L1. Following this event, Alex will drive his NASCAR number 18 EpiPen-Lowe’s-St Hubert-Spectra Premium racecar up Montée Gagnon and down Avenue de l’Érablière for a one and half-kilometre run. A City of Bois-des-Filion police patrol car and a safety fire department truck will lead the parade. Tagliani Autosport/22 Racing team transporter will also be part of the parade. Earlier in the week, teal-painted pumpkins supplied by the local Girard family owned IGA store were delivered to some 50 local residences.

Allergies Québec invites members of every household to support #MyTealPumpkin initiative in Bois-des-Filion and everywhere else in Quebec and in Canada by adding teal-coloured pumpkins to their doorsteps or by placing a MyTealPumpkin sign outside to indicate they are giving out non-food items so that kids with food allergies can enjoy and participate in a healthier and safer Halloween night.

TAGLIANI MEDIA TOUR
To inform the public, Alex Tagliani will go on a Montreal area Media Tour on October 30 and 31 to raise awareness of food allergies and to promote the #MyTealPumpkin initiative so that kids everywhere can safely enjoy Halloween festivities. For information regarding the tour, please contact us.