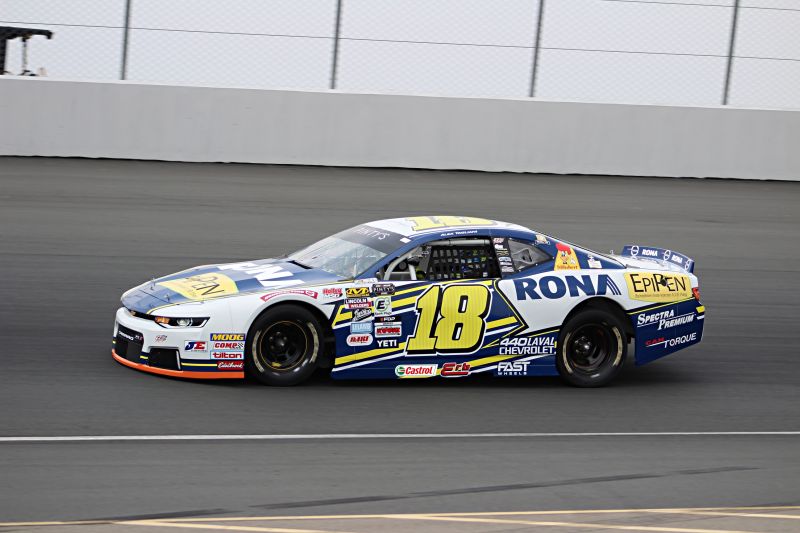 Milverton, ON, Wednesday Aug. 7, 2019:   The much-anticipated Grand Prix de Trois Rivieres and the 50 Tours Hotel Le Concorde is next up on the NASCAR Pinty’s Series schedule this weekend Aug. 10th & 11th.  The three 22 Racing drivers look forward to this iconic event each year in their home province.

“This is one of the big three on our schedule each year and we know how important it is to Donald, Marc-Antoine and Alex to have good cars and be able to run up front before their home province fans,” said team owner Scott Steckly.  “The crew is putting in long hours to get the cars ready as they do every week, so we expect them to be challenging for the podium spots.”

Alex Tagliani driver of the #18 Rona/EpiPen/St Hubert Camaro is looking to make it three in a row as he has won the last two Grand Prix’s here in 2017 and 2018.  It is no small feat to have won two in a row as the competition is stout with a large number of the competitors being road course aces.  Look for Tagliani to be pushing hard to get that three in a row and add to his 5 top five finishes, 2 poles and 69 laps led here.

Marc-Antoine Camirand driver of the #22 GM Paille Chevrolet Camaro has not tasted victory at the Grand Prix in the NASCAR Pinty’s series, but he has in other racing disciplines. He will be pushing hard to get to the top step of the podium this year and claim his 2nd series win and add to his 2 poles, three top 10 finishes and 37 laps led on this challenging 1.53-mile, 11 turn temporary street course.

Donald Theetge driver of the #24 Mercedes-Benz St Nicolas/Circuit Acura entry while not considered a road course racer finished in 7th in 2018 and loves the hometown atmosphere of having family and friends out to cheer him on.  Look for Donald to crack the top ten again this year and move up in the national standings.

The 2019 edition of the Grand Prix de Trois Rivieres, event eight of thirteen will see the NASCAR Pinty’s series on track for practice on Saturday at 12:50 p.m. followed by qualifying at 5 p.m.  Sunday’s autograph session will take place on track at 12:30 p.m. followed by the green flag for the 50 Tours Hotel Le Concorde at 2:18 p.m.  For more information on the grand prix visit gp3r.com

All NASCAR Pinty’s Series races in 2019 are live streamed on TSN.ca and the TSN app in Canada and on FansChoice.tv in the United States with this event being broadcast live on RDS2 starting at 2 p.m