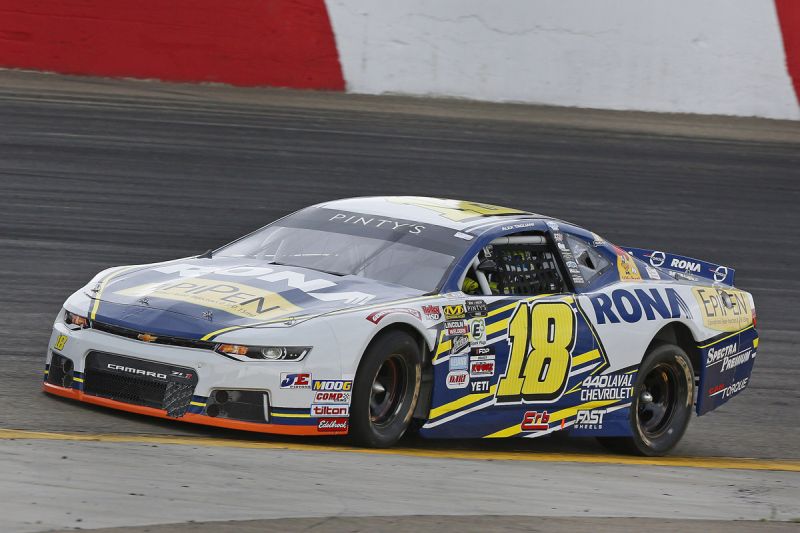 Montreal, July 28, 2019 – Every motorsport fan knows it’s what happens on the final laps of oval track racing that makes NASCAR so exciting. Anything and everything can happen. Payback time at the end of the race is often spectacular, and what excites race fans. However, rain showers are big spoilers on oval track events, and it happened twice in two of the three races held last week in NASCAR Pinty’s Western Swing. Wednesday evening in Saskatoon, a heavy downpour drowned the track and stopped the first of the two Velocity Prairie Thunder Twin 125s sprint races on lap 116 of 125. And Saturday evening in Wetaskiwin, a suburb of Edmonton, the same scenario was replayed, but this time on lap 275 of the 300 scheduled laps of the Luxxur 300. The sweltering heat announced over the Prairies finally turned into thunderstorms and sparked nightmares for some of the drivers.

And that’s what happened again on Saturday evening to racecar driver Alex Tagliani during this annual trip, a voyage that has not suited him well over these last couple of years, as he finished eighth. The Quebec driver was twice again a victim of the rain. The first difficulty came when qualifying was rained out and series officials used practice times as the starting grid for Round 7. Tag was 12th at the end of practice. Starting near the end of field on a quarter-mile oval track can cause all kinds of troubles for any driver. And Tag was also unlucky during most of the race restarts as he was caught on the outside lane, far from the leader. Not the right lane to be on as Tag discovered during the most of the five green flag restarts. Each time, he fell two or three spots in the field before gaining back his lost positions.

“Another race shortened by rain. It’s quite upsetting because the results are not representative of the performances of the Chevrolet #18 RONA/ EpiPen/St Hubert Spectra Premium,” explained Tagliani after the race. “Unlucky on top of that because I got caught on the outside lane several times during race restarts and it’s not the place you want to be on a short oval track. Each time, I had to retake positions lost before getting back to where I was before the yellow flag. I even got as high as sixth place, but there were full course yellows followed by restarts and I found myself buried in 12th place a couple of times.

“It’s a shame, because the car was much better than the results we achieved. But there is a positive side that does not show on the result sheets. Team 22 Racing has improved the oval car package a lot during the Western trip, but we have not yet reached its full potential. It’s promising for the upcoming oval track races. Right now, we are not in a hopeless situation. We are not throwing in the towel. We are going to continue to work hard and fight to win all the remaining races.”

A look back at what happened to Tag Saskatoon

Tagliani got a tough break in Saskatoon, but most of all he was unlucky when he finished 11th in the first Velocity Prairie Thunder Twin 125s on Wednesday, July 24. Running fifth on lap 107 on the Wyant Group Raceway one-third-mile progressive banking track, he was trying to pass a backmarker on the outside of a limited dry racing lane, when she pushed out a bit sending Tagliani onto a wet part of the track. He spun with his slick General Tires, as did so many before him, but bad luck would have it that the race was prematurely halted because of rain on lap 116 of the scheduled 125-lap affair. He never had a chance to fight back to the front as he did so many times early in the race. He had qualified eighth, but an early race start brawl sent him to 13th place before he was able to charge back to fifth.

In the second half of the twin bill after a long weather delay to dry the track, Tagliani finished sixth after starting 15th, quite a comeback for Tag. Starting positions for the second Velocity Prairie Thunder Twin 125s sprint are set by the first race quickest lap where he did not fare so well. Saskatoon has never been kind to Alex whose record is only three top-five finishes in nine starts.

If rain was a curse for some of the drivers, it was a blessing in disguise for Andrew Ranger as he faired very well in the championship race. Winner of two of the three Western Canada races, Ranger, with 311 points, increased his lead to 18 over Kevin Lacroix. With a win and a fourth-place finish in Saskatoon and a third-place finish in Edmonton, LP Dumoulin moved past Tagliani into third place with 281 points. Tag, who was only 14 points behind Ranger before the start of the Western Swing, now finds him 44 points behind the leader.

Next stop: The Grand Prix of Trois-Rivières

The NASCAR Pinty’s Series takes two weeks off after a gruelling Western trip for some of the teams as they head back East. For Tagliani, the Grand Prix de Trois-Rivières street course is a welcome venue where he has done extremely well in the past four years winning the last two GP3R and stepping four times on the podium.

TSN and TSN Direct subscribers can watch all NASCAR Pinty’s Series races live on TSN.ca and the TSN app. The Grand Prix of Trois-Rivières will be streamed live on TSN.ca and the TSN app on Sunday, August 11 starting around 2 p.m. Eastern. Check local listing. The GP3R race will also be televised live on the French network RDS. Fans in the United States can watch all races live on FansChoice.tv.

Images of Tagliani in Saskatoon and Edmonton