Returning to Action After a Four-Year Hiatus from the NASCAR Pinty’s Series, Scott Steckly Finishes 11th in St. Eustache 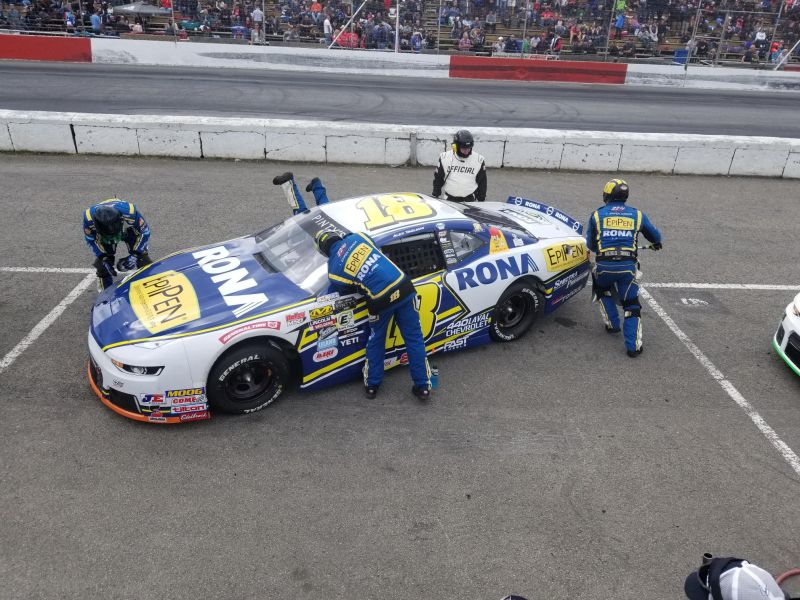 Montreal, September 8, 2019 – Veteran driver Scott Steckly came of out retirement and returned to competition at Autodrome St. Eustache on Sunday after a four-year hiatus from the NASCAR Pinty’s Series. The legendary Team 22 Racing owner was subbing for an ill Alex Tagliani in Round 11 of the series held on the 0.4-mile short track. The four-time NASCAR Pinty’s Series champion, who also manages the EpiPen/RONA/St Hubert/Spectra Premium number 18 Chevrolet Camaro of Tagliani, started the race from 10th place following the lone practice session held on Saturday afternoon. That session eventually set up the starting grid as rain forced the cancellation of qualifying and the scheduled Saturday night Lucas Oil 250 race, which was postponed to Sunday.

On race day, the Milverton, Ontario driver ran the Chevrolet EpiPen/RONA/St Hubert/Spectra Premium in the top 10 all race long, moving up to eighth place several times but finally finishing 11th. Jason Hathaway from Appin, Ontario, led the final 84 laps to score his second win of the season at the conclusion of the Lucas Oil 250 ahead of Kevin Lacroix of St. Eustache. Andrew Ranger, Alex Labbé, who led the most laps with 123, and Donald Theetge round out the top five.

Steckly took over from Alex Tagliani who was sidelined after contracting a minor myocarditis viral infection. The Quebec driver followed the strict advice of his doctor who ordered him to refrain from any physical activity this weekend, including car racing. The good news is that there will be no long-term effects.

“It was a fun day”, said Scott Steckly, “but not the result we wanted. It’s a competitive series and on a last-minute driver change, we will accept our finish and move on. We hope Alex gets well soon. I did the best I could for EpiPen, RONA and Spectra Premium but we still have work to do on our oval track program. We will be working very hard to make it better. We will keep digging and try to finish the season strong.”

This was the NASCAR Pinty’s Series final visit at the 0.4-mile short track, as it will close at the end of the 2019 racing season.

Seventeen drivers started the NASCAR Pinty’s race with 13 getting the chequered flag at the end of the race.  Seven cars finished on the lead lap. The 250-lap race was under full course caution four times for a total of 29 laps. The Lucas Oil 250 will be televised on TSN on Sunday, September 14 at 3:30 p.m.

In the car owner standings:

With Scott Steckly running the EpiPen/RONA/St Hubert/Spectra Premium number 18 Chevrolet Camaro of Tagliani in St. Eustache, the Racing 22 Team is still fourth in the Owner Standings with 427 points, only nine away from Marc-André Bergeron who runs LP Dumoulin’s car.

Kevin Lacroix is the new leader in the driver standings with 464 points, two more than Andrew Ranger. Unless something drastic happens to these drivers, the hunt for the championship should be played out between them. LP Dumoulin is still third, but 28 points back, followed by St. Eustache winner Jason Hathaway, who now totals 411 points (-53) and D.J. Kennington (-61). As for Tagliani, he is now out of the title hunt in sixth place. Things could worsen for the Canadian Motorsports Hall of Fame inductee if his condition forces him to miss the final two races.

The NASCAR Pinty’s Series will go south of the border for the second year in-a-row for their annual trek at New Hampshire Motor Speedway for the “Visit New Hampshire 100” race on Saturday, September 21 at 12:05